African leaders took the podium on the opening day of the 67th United Nations General Assembly’s high-level debate with a focus on the conflicts and humanitarian crises that block the path to development on their continent.

Benin’s President Boni Yayi called on the international community to help eliminate the grave threat posed by Islamist militants who have seized control of northern Mali, warning the United Nations that they endanger stability in the whole West African region.

“These terrorist movements engage in all sorts of trafficking in drugs, people and all calibre of arms,” he said. “They are committing massive violations of the fundamental rights of citizens by imposing practices from another age. They are irreversibly mutilating people by amputating their upper and lower limbs as punishment.”

The world community must collaborate with the African Union to “eliminate this grave threat to the peace and security of the sub-region and prevent a large-scale humanitarian catastrophe,” President Yayi continued.

Islamic militant groups seized control of a wide swath of northern Mali following fighting between Government forces and Tuareg rebels in January, and the resulting insecurity and rigid enforcement of Islamic Sharia law, as well as drought, have led over 250,000 Malians to flee to neighbouring countries, with 174,000 Malians estimated to be internally displaced.

“In the spirit of the strategic relationship between Africa and the United Nations in the field of peace and security it is crucial that the Security Council not lose interest in the fate of civilians exposed to violent abuses by extremist and terrorist movements,” President Yayi said.

Among other challenges confronting the continent, he cited piracy in the Gulf of Guinea and the Horn of Africa, malnutrition, unemployment, soil erosion, climate change and bad governance.

As he and other African leaders have at past General Assembly general debates, he also called for the enlargement of the 15-member Security Council, with Africa receiving permanent seats.

In his statement to the General Debate, President Ali Bongo of Gabon also condemned the situation in Mali and the efforts to partition it, as well as the destruction of World Heritage sites in the historic city of Timbuktu, where rebel groups have looted centres containing thousands of ancient books and documents.

There were also been reports of the destruction of three sacred tombs – the Mausoleums of Sidi Mahmoud, Sidi Moctar and Alpha Moya – that are part of the Timbuktu site, which was an intellectual and spiritual capital and a centre for the propagation of Islam throughout Africa in the 15th and 16th centuries.

President Bongo called on the Security Council and Member States to support a UN strategy for the Sahel region focussing on security, governance, development, human rights and humanitarian issues. He also called for permanent African representation on an enlarged Council.

He made a general appeal for global understanding. “Our world needs more than ever a dialogue if civilisations and cultures,” he said. “It needs more understanding and respect between peoples to build a more peaceful world.”

President Joseph Kabila of the Democratic Republic of Congo.

Addressing the General Debate, President Joseph Kabila of the Democratic Republic of Congo (DRC) – whose own country has been torn by violence and has seen a restoration of stability in many regions with the help of UN peacekeeping forces – also warned of the separatist tensions tearing at Mali, as well as piracy at sea, terrorism, hunger, poverty and disease afflicting the continent.

Referring to the situation in DRC, he noted the resurgence of fighting and violence in North Kivu province in the country’s east. “At the very moment that I am speaking to you here, hundreds of thousands of children, women and men in North Kivu are deprived of peace and subjected to inhuman and degrading treatment,” he said.

An estimated 390,000 people have been internally displaced in eastern DRC and more than 60,000 Congolese have fled to neighbouring Rwanda and Uganda since fighting erupted in North Kivu in April between Government forces, supported by peacekeepers from the UN Organization Stabilization Mission in the DRC (MONUSCO), and the M23 rebel group, made up of renegade former soldiers.

The DRC President condemned negative forces behind the conflict, which he said are led by elements who make no apology for their great ability to cause great harm and for their foreign support.

“Children are deprived of school and forced to bear and use fire arms to kill their fellow humans, even their own brothers and sisters,” he added. 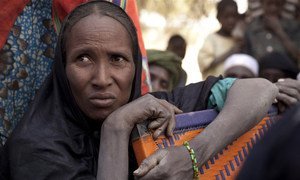 The Security Council today reiterated its grave concern about the continuing deterioration of the security and humanitarian situation in northern Mali, and urged rebel groups in the country to cut off all ties to terrorist elements, including Al-Qaida in Islamic Maghreb and affiliated groups.