“We need to redefine our priorities, invest in the real economy and agree on a new fairer world order,” President Sall said in his address to the General Debate of the Assembly’s 67th session, taking place at UN Headquarters in New York.

President Sall emphasized that the African Continent, which had already endured centuries of slavery and exploitation, could not afford “to act again as Trojan horse and give over its resources in a competition that would push it further to the margins of progress and well-being.”

Echoing other leaders who had addressed the General Debate earlier on Tuesday, the Senegalese President called for greater representation by African nations in the Security Council, noting that the African continent counted the largest number of countries at the UN and that it was “a matter of justice and common sense.”

Turning to regional peace and security issues, President Sall urged the Security Council to adopt a greater roll in resolving the vacuum of power in northern Mali where, he said, “organized and heavily armed terrorist groups, living off all sorts of trafficking, have been occupying in complete illegality two thirds of the country, sowing despair among the population and destroying symbols of World Cultural Heritage.”

“Northern Mali has become a lawless area, used as a safe haven for recruitment and training by the international terrorist nebula,” President Sall warned, adding that the Security Council has “the obligation to act in order to bring an end to such a situation.”

President Sall also reiterated Senegal’s “firm rejection” of any partition of Mali and his condemnation of the March 2012 military coup which saw rebel Malian soldiers take control of the country and announce the dissolution of the Government led by then-President Amadou Toumani Toure.

Meanwhile, the Senegalese leader reserved praise for the work done by Guinea-Bissau’s Transitional Government as it works towards national reconciliation and the organization of credible elections following its unconstitutional change of government earlier this year. He noted, however, that the country deserved the continued support of the international community as it was also beset by “faithless and lawless foreign drug traffickers.” 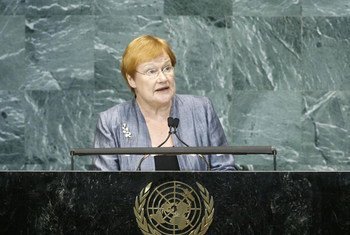 21 September 2011
Leaders from Europe and Africa used the opening day of the General Assembly’s annual session today to stress the important role that mediation can play in resolving conflicts before they become intractable.