25 September 2012
The United Nations should consider the views of regional organizations when it comes to resolving conflicts, Namibia’s President, Hifikepunye Pohamba, told the General Assembly’s high-level debate, commending the role played by African organizations in settling disputes on the continent.

“Regional and sub-regional organizations are important partners in solving conflicts in the affected areas throughout the world,” President Pohamba said in his address to the General Debate of the Assembly’s 67th session, taking place at UN Headquarters in New York.

He said the unresolved conflicts around the world demand commitment and resolve from everyone to find durable solutions.

“There is thus, a compelling need for the United Nations to take into account the views of regional organizations in the areas of mediation and peacekeeping. These institutions should be fully supported in finding lasting solutions to violent conflicts around the world,” he stated.

President Pohamba pointed out that the African Union Peace and Security Council has, since its inception, cooperated with the UN Security Council toward the shared goal of conflict resolution.

Similarly, the Southern African Development Community sub-region has put initiatives in place to resolve political conflicts in the region through mediation.

“However, we are concerned about the deteriorating security situation in the eastern Democratic Republic of Congo,” stated the President. “We, therefore, urge the international community to support the regional initiative aimed at resolving this conflict and to provide humanitarian assistance to displaced persons.”

He also highlighted the need for Sudan and South Sudan to peacefully resolve all outstanding issues stemming from the latter’s independence, and urged political actors in Madagascar, which experienced political upheaval last year, to carry out a roadmap leading to the holding of free, fair, inclusive and credible elections.

Denouncing the unconstitutional changes of government in Mali and Guinea-Bissau earlier this year, the Namibian leader commended the role played by the Economic Community of West African States (ECOWAS) to help resolve the conflicts in these two countries. He also urged the international community to provide support and assistance to ECOWAS.

“Namibia firmly believes that, if we all dedicate ourselves to finding lasting solutions to conflicts by peaceful means, our collective efforts will be successful,” President Pohamba said.

In his address to the Assembly’s General Debate, Uganda’s Vice President, Edward Kiwanuka Ssekandi, also highlighted the role of regional and sub-regional bodies in resolving conflicts.

“In cases where national actors cannot resolve the problem, for some reason, then the sub-regional organizations should step in,” he said, adding that the UN and the international community would then provide the necessary support to the sub-regional and regional initiatives.

“The advantages of such an approach include utilizing actors that have more discerning knowledge of the problem, those that are in close proximity and with a greater stake in having the problem resolved, as well as the international support and legitimacy that the United Nations provides,” he noted.

Vice-President Ssekandi called on the Security Council and the international community to support the regional initiative by the International Conference of the Great Lakes Region aimed at addressing the root causes of the conflict in eastern Democratic Republic of the Congo (DRC), the deployment of a neutral international force, and responding to the humanitarian crisis in the country.

“Our preference for homegrown solutions is premised on the realization that external influences or interventions do not necessarily offer sustainable solutions to resolve conflicts,” he noted. “On the contrary, external interventions often contribute to a cycle of destabilizing tendencies which is why we are still grappling with situations like the one in eastern DRC.”

An estimated 390,000 people have been internally displaced in eastern DRC and more than 60,000 Congolese have fled to neighbouring Rwanda and Uganda since fighting erupted in the eastern DRC in April between Government forces, supported by peacekeepers from the UN Organization Stabilization Mission in the DRC (MONUSCO), and the M23 rebel group, made up of renegade former soldiers.

In addition to President Pohamba and Vice-President Ssekandi, scores of the world’s heads of State and government and other high-level officials are presenting their views and comments on issues of individual national and international relevance at the Assembly’s General Debate, which ends on 1 October. 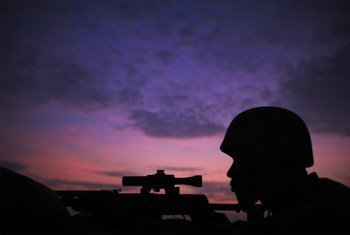