25 September 2012
With the debate on United Nations reform still lagging after 18 years, President Jacob Zuma of South Africa today called for making the Security Council more democratic, with an expansion of seats and greater representation for Africa.

“Given its mandate, the Council has to be legitimate, democratic and transparent. Its current composition has a propensity for deadlock and paralysis even in the face of crisis,” President Zuma said during the General Assembly’s high-level General Debate. “It remains unrepresentative and undemocratic in both its composition and decision-making.”

Some countries have argued that this structure does not represent the realities of today’s world, and other leaders addressing the General Debate on Tuesday made similar calls to President Zuma.

Key issues under discussion in the intergovernmental negotiations on Council reform are the category of membership, the question of veto, regional representation, the size of an enlarged Council, and the Council’s working methods and its relationship with the Assembly.

“The UN faces immense pressure when the world sees the unprecedented loss of lives as it is happening in Africa and the Middle East,” the South African President said. “It is of concern when it appears as if the United Nations is unable to act and assist, and when it comes across as paralyzed in certain instances, due to the actions of some Member States.”

“We have seen a divided Security Council unable to muster the collective courage to say ‘no more’ to warring parties in the interest of peace,” he added. “This brings to the fore the need to continue and deepen the reform of the United Nations and its organs to make it agile and nimble in addressing the contemporary challenges facing humanity.”

The President called for “more meaningful” representation of Africa in the Council, noting that about 70 per cent of the 15-member body’s agenda consists of issues from the continent.

In addition to seats for the continent in its composition, the UN should also recognize fully and appreciate the role of regional organizations working with the UN in conflict management and resolution, he noted, urging closer collaboration with the African Union.

The South African leaders also said that, to promote the peaceful settlement of disputes, the Council should carry out its Charter mandate “within the confines of international law,” adding that any Member State or international body that implements the Council’s resolutions should be accountable to it.

“This will ensure that we avoid the abuse of internationally agreed concepts like Responsibility to Protect and the Protection of Civilians. These principles must not be used to, amongst other things, justify the notion of regime change,” President Zuma said.

He added, “These concepts exist to prevent mass atrocities, war crimes, genocide and ethnic cleansing. We should continue the debate on these principles in order to develop norms and standards for accountability when actions are taken.”

In his meeting with President Zuma today, Secretary-General Ban Ki-moon expressed appreciation for South Africa’s leadership role on some key African issues. Among other topics, the two men noted their deep concern about the situation in the West Africa’s Sahel region, especially northern Mali, and the need for the international community to play a bigger role in resolving the problems in the affected countries.

Along with the South African President, scores of heads of State and government and other high-level officials are presenting their views and comments on issues of individual national and international relevance at the Assembly’s General Debate, which ends on 1 October. 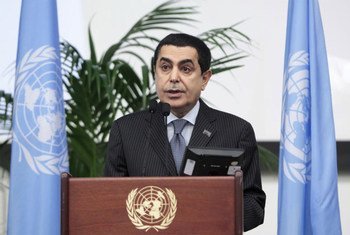 8 November 2011
The President of the General Assembly today called on Member States to make headway on the negotiations aimed at making the Security Council a more efficient, transparent, universal, and democratic body.