UNAMA/Najeeb Farzad
In Kabul, Afghanistan, school children hold hands and take advantage of the last few moments of sunlight to finish their game.

From sustainable development to economic development, and human rights to humanitarian aid, UN News provides daily coverage across all of the Organization's  key issues – health, migration, climate change and so much more.

Acting as a visual gateway for our readers, we carefully select the most eye-catching and powerful images to help tell the story before delving into the text.

As the year winds down, we have compiled below, 12 months of some of the most visually arresting images for our 2019 stories.

Graham Crouch/World Bank
As 2019 marks the 150th anniversary of the creation of the Periodic Table by Russian scientist Dmitry Ivanovich Mendeleev, the UN has launched a yearlong initiative to raise awareness of chemistry and its applications for sustainable development.

In January, the United Nations Educational, Scientific and Cultural Organization (UNESCO) launched the International Year of the Periodic Table of Chemical Elements at its headquarters in Paris, kicking off a series of events and activities to be held throughout the year, as the world celebrates the 150th anniversary since its creation by Russian scientist Dmitri Mendeleev. Here's our story.

Hailing the recent peace agreement signed by 15 warring parties in the Central African Republic (CAR), the UN Children’s Fund (UNICEF) stressed that “now is the time for action” and outlined concrete steps that armed groups, judicial authorities and the Government can take so the future of millions of children can be safeguarded.  Read our story here.

Governments across the world have a “moral obligation” to help Syrians “unite around a vision for their common future”, finally bringing an end to eight years of brutal conflict, the UN Secretary-General  said as the conflict entered its ninth year. More on the story here.

Further details have emerged about an attack on a school in the Yemeni capital Sana’a that killed 14 youngsters and critically injured 16 others. Read more here.

FAO/Alessia Pierdomenico
A participant at World Bee Day, held at FAO headquarters in Rome to raise awareness on the role of bees and pollinators in food and agriculture, captures a photo of a bee observation hive. (20 May 2019)

If you think you’re busy, then spare a thought for the world’s bees; for they, along with other insects and animals, are responsible for pollinating more than 75 per cent of the planet’s favourite food crops. Read more about it here.

UNICEF/Khudr Al-Issa
Eight-year-old Hanaa, who was paralysed by an exploding bomb and lost the use of her legs, sits in her wheelchair near her home in East Aleppo City, Syria (28 February 2018)

The Security Council adopted its first-ever resolution calling on UN Member States and warring parties to protect persons with disabilities in conflict situations and to ensure they have access to justice, basic services and unimpeded humanitarian assistance. Read more here.

A new UN report has found that 2018 was the worst year on record for children caught up in armed conflict; the year saw the highest numbers killed or maimed since the United Nations began monitoring the violation.  Here's more on the story.

Ethiopia is beset by “persistent and multi-faceted humanitarian problems”, the United Nations relief chief said, calling for more international funding as well as support for the Government-led response to the country’s displacement crisis. Read more about the situation here.

A landmark UN migration study shows that 93 per cent of Africans making the journey to European countries along irregular routes, would do it again, despite facing often life-threatening danger.  Click here to read more.

To help ensure the most-consumed foods don’t disappear in the face of the climate crisis, farmers must cultivate crops able to resist environmental shocks and other stresses, the Food and Agriculture Organisation (FAO) highlighted in a new set of conservation guidelines. Read our coverage here.

OCHA/Giles Clarke
Displaced children stand in the shredded remains of tents in Abs settlement, Yemen, for internally displaced persons. Located just 40 km from the frontlines, the settlement is regularly damaged by passing sandstorms.

A record 168 million people worldwide will need help and protection in crises spanning more than 50 countries in 2020, the UN’s emergency relief chief has said, in an appeal for nearly $29 billion in humanitarian aid from donors.  Here's more on the story. 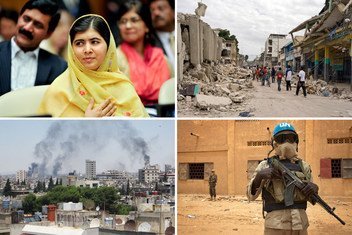 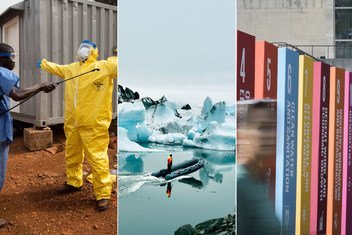