CAR has been grappling with conflict since 2012, as fighting between the mostly Christian anti-Balaka militia and the mainly Muslim Séléka rebel coalition killed thousands and left two out of three civilians dependent on humanitarian aid. In 2013, armed groups seized the capital and then President François Bozizé was forced to flee. After a brief period of reduced violence in 2015, and elections held in 2016, fighting intensified again at the end of the year.

Peace talks had started on 24 January this year in Khartoum, Sudan, and lasted 10 days under the auspices of the African Initiative for Peace and Reconciliation in CAR, led by the African Union (AU) with UN support. The deal was agreed in Khartoum, but formally-signed on Wednesday in CAR’s capital, Bangui.

Mr. Guterres commended the stakeholders for the successful conclusion of the talks, highlighting the “leadership role” of the AU and encouraged “all stakeholders to live up to their commitments in the implementation period”.

He reiterated the United Nations’ commitment to assist the Central African Republic "at this critical stage”, and called “on neighbouring countries, regional organizations and all international partners to support the courageous steps that Central Africans have made to bring lasting peace and stability in their country”.

Among other recent positive developments towards stability and accountability in the Central African Republic, political coordinator of the mainly Christian anti-Balaka militia faction, Patrice-Edouard Ngaïssona, was transferred two weeks ago to the International Criminal Court to face accusations of crimes against humanity and war crimes. He had been arrested on 12 December last year in France, on a warrant for crimes allegedly committed in CAR during 2013 and 2014.

As the Central African Republic enters this new phase, the UN chief announced on Wednesday also that Mankeur Ndiaye of Senegal will be his new Special Representative to the country, mandated to head the UN’s stabilization mission there (MINUSCA). He succeeds Parfait Onanga-Anyanga of Gabon, who had been leading the Mission since August 2015.

The UN Secretary-General said he was “grateful” for Mr. Onanga-Anyanga’s “unwavering commitment”, stating that his “leadership, integrity, personal commitment and tireless efforts have been crucial, including in support of the ongoing peace process as part of the Panel of Facilitators of the African Initiative”. 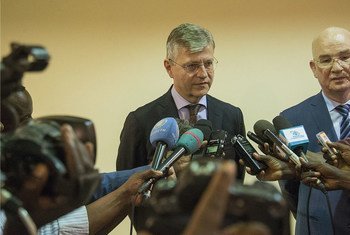 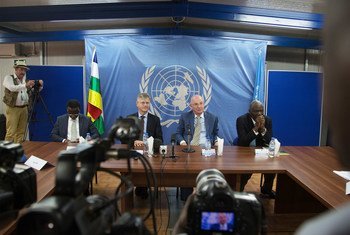