FAO/Alessia Pierdomenico
A participant at World Bee Day, held at FAO headquarters in Rome to raise awareness on the role of bees and pollinators in food and agriculture, captures a photo of a bee observation hive. (20 May 2019)
20 May 2019
UN Affairs

If you think you’re busy, then spare a thought for the world’s bees; for they, along with other insects and animals, are responsible for pollinating more than 75 per cent of the planet’s favourite food crops.

The problem is, pollinators are under threat, and their numbers are falling because of human impact. We are likely losing some species forever, FAO believes, based on available data in the U.S and Europe.

It’s a warning that the UN’s Food and Agricultural Organization, FAO, highlighted on World Bee Day, which is observed on Monday 20 May.

“It’s really a culmination of factors kind of all coming together, all of which are driven by human activity,” said FAO agriculture officer Abram Bicksler. “So climate change is a factor, habitat loss is a factor, the overuse of pesticides is a big factor, but also there are many diseases and pests that are affecting our pollinators and so when those are taken together, yes, pollinators are really facing a hard time.”

According to FAO, the most popular pollinators are bees, and there are between 25,000 to 30,000 species.

The UN Deputy Secretary-General, Amina Mohammed, gave the keynote address at UN Headquarters in New York, as part of a celebratory event marking the Day.

Wild bees are more prolific pollinators than the domestic species, owing to the fact that they have more fur for pollen particles to cling to when they go in search of it.

Without bees and other pollinators – butterflies, hummingbirds, bats and even monkeys, among others - FAO says that we wouldn’t have coffee, apples, almonds, tomatoes and cocoa, among many other fruit and seed-producing crops.

In a call to protect bees and other pollinators, the FAO underscored their key role in keeping the planet healthy by conserving biodiversity - a cornerstone of the Sustainable Development Goals, and a key element in building resilience in farming ecosystems to climate change.

To find out more, listen to this FAO podcast about the importance of bees:

In an appeal to members of the public to help tackle the threat to bees and other pollinators posed by invasive insects, pesticides, land-use change and monocropping practices – which may reduce available nutrients for bee colonies - FAO recommends planting a variety of bee-friendly flowers.

It also encourages people to create their very own insect hotel – a hollow-ended tree trunk or branch, for instance – which is an ideal shelter for insect pollinators.

“The big thing is promoting their habitat,” said FAO’s Mr. Bicksler. “You can also talk to your policy-makers and share about the importance of these in pollinators for food security, for reducing poverty, and also for the production the things you love, like beeswax and honey.”

Celebrated for the first time in 2018, the date chosen for World Bee Day – 20 May - is no accident; it was chosen to coincide with the birthday of Anton Janša, a pioneer of modern apiculture from Slovenia.

Mr. Janša came from a family of beekeepers in a country where beekeeping is an important agricultural activity with a long-standing tradition, FAO said in a press release.

The idea for World Bee Day was promoted by the Republic of Slovenia, with the support of Apimondia, the International Federation of Beekeepers’ Associations and FAO.

World Bee Day was approved by the United Nations General Assembly in 2017 and celebrated for the first time last year. Here's a look back at the piece our UN Video team made a year ago for UN News.

♦ Receive daily updates directly in your inbox - Subscribe here to a topic.
♦ Download the UN News app for your iOS or Android devices.
World Bee Day|Pollinators 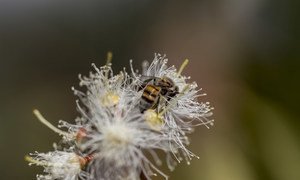 With the biodiversity of plants cultivated for food shrinking, the global population’s health, livelihoods and environment are under severe threat. This warning from the Food and Agriculture Organization (FAO) comes as the UN agency releases a new report – the first of its kind – on the state of the world’s biodiversity in food and agriculture. 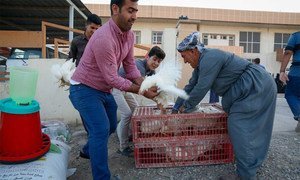