“I repeat our call again today” to Syria’s warring parties, said Mark Lowcock, who is also the Under-Secretary-General for Humanitarian Affairs: “Ease the suffering, save lives, end the fighting [and] obey the law”.

Speaking via video link, he noted that this was the Council’s fifth humanitarian briefing on Syria in the last eight weeks. He quoted High Commissioner for Human Rights, Michelle Bachelet, in summarizing reports of hundreds of civilian casualties and destruction to infrastructure, including hospitals and schools, mainly caused by Government air strikes and to a lesser extent, ground-based armed groups attacks.

Today, once again, I updated the @UN Security Council on the the humanitarian situation in Syria. Our plea remains the same:

Ease the suffering
Save lives
End the fighting
Obey the law

“We have repeatedly asked you to make this stop”, Mr. Lowcock pleaded. “It has not stopped, or even slowed”.

Despite ceasefire efforts in the northwest, hostilities continue unabated. Fighting among Government forces and their allies, armed opposition forces and the Security Council-listed terrorist organization Hayat Tahrir al-Sham continues to impact civilians every day, he said.

In northern rural Hama, seven others, including a child, were reportedly killed by airstrikes and artillery shelling and hundreds of thousands have been displaced.

Mr. Lowcock spoke emotionally about regular attacks on Maarat Al-Numan, in southern Idlib, voicing concern over Maarat National Hospital, which at peak times treated about 20,000 people a month. It is now operating under emergency conditions but remains the main referral hospital in southern Idlib.

“While operating in a conflict zone and in an area under the control of a Security Council-listed terrorist organization”, Mr. Lowcock stressed, “they keep their life-saving services going with the support of humanitarian organizations”.

“There is serious reason to worry”, he continued saying that on 20 June an ambulance was hit, killing the patient and three medical workers and seriously injuring two paramedics. “We must see an end to such attacks on medical workers, transport and facilities. We must see hospitals like Maarat National Hospital protected”.

In Rukban, along the Syrian-Jordanian border, “some 27,000 people remain in desperate need of humanitarian assistance”, he flagged, adding that “inadequate, basic services are costing lives”.

Recalling the UN’s unapproved request for access to Rukban on 9 May, he said “We continue to call for humanitarian access…to deliver life-saving aid, and to assist those who would like to leave the camp”, saying that “another request is being prepared”.

In al-Hol Camp, in northeast Syria, humanitarian agencies continue to respond to the considerable needs of some 73,000 mainly women and children in the camp, particularly in the areas of health, water, sanitation and hygiene.

“At the same time”, Mr. Lowcock said, “we continue to be concerned about restricted humanitarian access to the annex, where 11,000 foreign nationals are living”. Both victims of the terrorist group ISIL and families of former-fighters, are sheltering in the camp.

While some positive reports of foreign national children being repatriated, thousands more in the camp face uncertainty, prompting him to call upon Member States to repatriate their nationals “for rehabilitation and reintegration, or prosecution, as appropriate, in line with international law and standards”.

And in the south of Syria, rising tensions between government forces and local groups threatens to reignite. 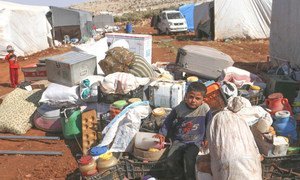 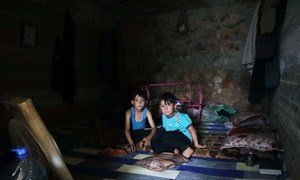