The UN’s head of Political and Peacebuilding Affairs, Rosemary DiCarlo told members that “we have been here before: in Aleppo, Eastern Ghouta and Raqqa” where civilian casualties mounted along with an all-out offensive by the Syrian Government and its allies.

“If the escalation continues, and the offensive pushes forward, we risk catastrophic humanitarian fallout and threats to international peace and security”, she said, giving a cautious welcome to the announcement on Wednesday of a new Turkish-Russian working group, convened to try and salvage the military buffer-zone deal reached between the two nations last September over Idlib.

The top former United States diplomat said the UN had followed the intensifying violence which has reportedly killed more than 100 civilians, and displaced around 180,000 already displaced civilians, “with great concern”.

UN Photo/Loey Felipe
Rosemary DiCarlo, Under-Secretary-General for Political and Peacebuilding Affairs, briefs the Security Council on the situation in Syria. (17 May 2019)

She noted the presence of the terrorist group Hayat Tahrir al-Sham (HTS), which reportedly now holds sway in much of Idlib, saying that “the international community agrees” that it’s presence “must be addressed. But with three million civilians in close quarters, combatting terrorism cannot be allowed to supercede obligations under international law.”

Ms. DiCarlo said the UN-facilitated political track needed to be revitalized, adding that if the Council can work together in support of Russia and Turkey’s ceasefire commitment “then we can work towards restoring a nationwide ceasefire and consensus” in line with previous Resolutions.

“International cooperation and support of the Geneva process is critical if Special Envoy (Geir) Pedersen is to realize his mandate” she said, adding that “the conflict is Syria is complex but there is a path forward.”

“Let us unite today for the first step – to support an immediate de-escalation of the violence in greater Idlib and work towards a political solution that meets the legitimate aspirations of the Syrian people”, she concluded.

Despite repeated warnings from the UN Secretary-General and others, the decision by the Syrian Government and allies - which include Security Council permament-member Russia - to intensify a military offensive on Idlib in recent weeks, means that “our worst fears are now coming true”, said Emergency Relief Coordinator, Mark Lowcock.

He reminded Council members that “the innocent civilians of course hugely out-number the men with guns” across Idlib. While many of the 180,000 newly-displaced have moved to camps in the past three weeks, “more than 80,000 people have found themselves with nowhere to go, so they are simply parked in open fields or sheltering under trees.”

At least three IDP camps had been attacked with resulting deaths and injuries, and 17 schools damaged and destroyed, with more than 400,000 unable to sit for important exams. The UN humanitarian response would be completely overwhelmed if a full military incursion takes place, he added.

The escalation in attacks on medical facilities inside the escalation zone, was the biggest cause for concern he said, noting the World Health Organization (WHO) had confirmed 20 attacks on 18 different facilities – or one per day, in the past three weeks.

‘What is the point of the Security Council passing resolutions like that if States are not going to comply with them?’

He ended his briefing with a chilling list of factual responses to some key questions put to his office in recent weeks, by Member States, NGOs, doctors and families affected by fighting in the Idlib zone. Here is the full transcript of his  closing remarks:

"Who is bombing all these hospitals?

I can’t say. But at least some of these attacks are clearly organized by people with access to sophisticated weapons including a modern air force and so called smart or precision weapons.

Are hospitals being deliberately targeted?

I don’t know. The people who do, are the ones dropping the bombs. What I can tell you is that there are a lot of attacks on these health facilities.

Is it true that you provide details of where hospitals are, in order to protect them?

Yes. The obligation to protect civilian objects - including hospitals - comes from international humanitarian law. We give details of some hospital locations to the parties to the conflict, so they can comply with those obligations.

Is the information being provided about the locations of hospitals in fact being used not to protect hospitals but to target them?

I don’t know. Again, the people who can answer that question are the ones dropping the bombs. Many deconflicted sites which are not hospitals, have not been attacked.

Has this kind of thing happened before during the Syria conflict?

Yes. The then Special Envoy, Staffan de Mistura and I, last year raised concerns about similar attacks in eastern Ghouta with Council Members who we thought might have relevant information and who we thought could prevent a recurrence.

Did you get satisfactory answers at that time?

We have yet to receive full answers to the questions we raised last year.

If I were an NGO running a hospital, why would I want to give you give you details of my location if that information is simply being used to target the hospital?

That is a good question. We are thinking about what conclusions to draw from recent events in respect of the deconfliction system in so far as it covers health facilities.

What is your advice to parents of children who live in the de-escalation zone – should they take their children to the hospital in the case of an illness or injury?

That is a very difficult question. I am deeply concerned about the impact on the health of children, and their safety, when so many medical facilities are being attacked.

What would you do if you were the parent of a child needing hospital care in the so-called de-escalation zone in Idlib right now?

I am sorry to say that I just don’t know. I feel desperately sorry for parents in that horrible position.

Finally, I am asked: What is the point of the Security Council passing resolutions like that if States are not going to comply with them?

That, Mr President, is also a very good question. It is, of course, not really addressed to me.” 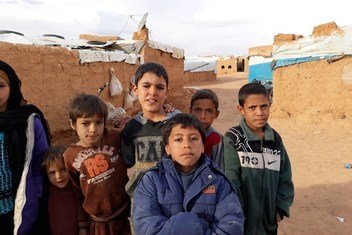 Food supplies are dwindling and the humanitarian situation has become increasingly dire in a camp for displaced people in south-east Syria, a senior UN official said on Thursday, while condemning ongoing airstrikes and retaliatory shelling in opposition-held territories in the north-west. 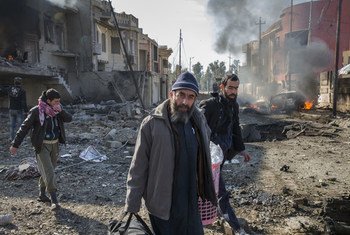