UNICEF/Aaref Watad
Having fled hostilities in Syria's Idlib, two boys have a meal in their temporary shelter, near the Turkish border. (June 2019)

“There is no denying the facts”, he stated.

“Over the last six weeks, the conduct of hostilities has resulted in more than 230 civilian deaths, including 69 women and 81 children” he detailed in a briefing to the Council. “Hundreds more have been injured” and since 1 May, “an estimated 330,000 people have been forced to flee their homes” – almost double the number since his last briefing.

Moreover, many have moved multiple times since the start of the conflict, particularly in the Idlib area, constantly searching for safety. Displacement camps are overcrowded, with many people forced to stay in the open and those who remain close to the fighting live in constant fear of the next attack.

“Many are crowding into basements, seeking refuge from air strikes, volleys of shells and mortar rounds, which continue to threaten what is left of their homes”, explained the Relief Coordinator. “Hospitals, schools and markets have been hit. Power stations have been affected. Crops have been burned. Children are out of school”.

“Attacks on civilians and civilian infrastructure need to stop immediately”, he asserted.

Mr. Lowcock detailed the diverse UN response, from emergency food assistance to water, health and sanitation supplies. “If this Council had not renewed resolution 2165” none of it would have been possible, he continued, referring to the 2014 measure that approved relief delivery “across conflict lines” and through additional border crossings.

Noting that “the UN and the brave humanitarian workers” are “risking their lives to help others”, he lamented that “the response is stretched and a further increase in need brought on by additional fighting would risk seeing it overwhelmed”.

More than 250,000 children are out of school; exams were cancelled for some 400,000 students; 94 schools are being used as shelters; and many hospitals have closed out of fear of being attacked.

“These attacks don’t just claim innocent lives”, he said. “They also deprive thousands of civilians of basic health services, even as fighting intensifies around them”.

Stressing that under international humanitarian law, all parties are obligated to refrain from attacking protected sites, Mr. Lowcock called it “appalling” that these sites were hit, adding that attacking a facility whose coordinates were shared as part of the UN’s de-confliction system was “intolerable”.

.@UN political chief Rosemary DiCarlo will brief the Security Council on the dire situation in #Idlib, #Syria, in about 10 minutes. pic.twitter.com/Htz93zqYRh

He explained that some partners now feel that supplying geographical coordinates “paints a target on their backs”, drawing the conclusion that “hospital bombings are a deliberate tactic aimed to terrorize” and raising “deep questions about the de-confliction system”.

“Countering HTS is plainly a major challenge”, he admitted. “But counter-terrorism efforts cannot in any way absolve States of their obligations to uphold international humanitarian law”.

'Not just a humanitarian issue'

Violence in north-west Syria “continues unabated” as parties on the ground try to advance militarily, the chief of UN Political and Peacebuilding Affairs told the Security Council on Tuesday.

“Our unflagging efforts to mediate a political solution …cannot move forward in an environment of open conflict”, said Rosemary DiCarlo, adding that efforts will suffer if Russia and Turkey cannot uphold their ceasefire agreement and the Astana Group cannot work together supporting the Special Envoy.

Moreover, population centers and civilian infrastructure, including schools and medical facilities have been attacked, mostly inside the de-escalation area.

She called “imperative” that the jihadist HTS organization be addressed “without triggering the humanitarian catastrophe that we see unfolding before our eyes”.

It is imperative to restore calm before HTS can be dealt with in a sustainable way, “where civilians do not pay the price”, she stated.

Secretary-General @antonioguterres is deeply concerned about the escalation of fighting in Idlib, Syria. Civilians are paying the horrific price. His remarks just now: pic.twitter.com/uucWplUPYn

While the UN continues to press for a solution in Idlib, Ms. DiCarlo worries that without one, the consequences would be “unimaginable – and not just in humanitarian terms”.

She recalled that last weekend one of Turkey’s observation posts had been intentionally shelled by Government forces, after which it “retaliated” with heavy weapons – the second such incident in less than a week.

Looking to the upcoming G20 meeting, she stressed the need for a diplomatic outcome in Idlib “for the political process to advance”, and called on international participants, particularly Russia and Turkey, “to exert the efforts needed to end the violence and restore calm”.“Idlib is not just a humanitarian issue it also poses a grave risk to regional security”, she underscored.

“The Syrian people have paid a high price for the failures of the international community to end this war”, she maintained. “More than half the population is displaced and in need, more than five million refugees are uncertain of when it will be safe to return, hundreds of thousands have paid with their lives, tens of thousands detained, missing, tortured”.

“All that is required is the political will”, Ms. DiCarlo underscored.

Meanwhile, Secretary-General Antonio Guterres appealed to Russia and Turkey on Tuesday “to stabilize the situation without delay”.

Expressing his deep concern “about the escalation of the fighting in Idlib” and the danger “given the involvement of an increased number of actors,” he underscored to the press that “even in the fight against terrorism there needs to be full compliance with international human rights and humanitarian law.” 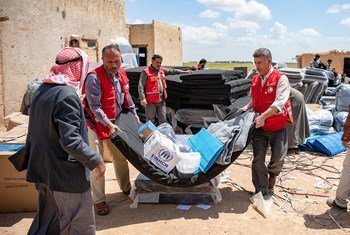 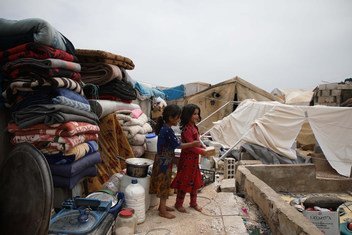