Speaking on the sidelines of a pledging conference in Geneva, Mr. Guterres welcomed the generosity of Member States, who pledged 30 per cent more than during last year’s conference to raise life-saving funds for Yemen.

The UN chief also announced that the World Food Programme (WFP) has been able to reach the so-called Red Sea Mills food stores in the key port city of Hudaydah, where more than 50,000 tonnes of wheat - enough to feed 3.7 million people for a month – has been trapped for months, due to fighting between coalition forces backing the Government, and Houthi rebels who control the city and port.

The UN emergency food assistance agency confirmed the information but has yet to announce if its stocks are fit to eat, after months without access.

The highest contributors at the conference - at $500 million each - were Saudi Arabia and United Arab Emirates, supporters of the internationally recognized Government of President Abd Rabbu Mansour Hadi.

“The donors have pledged 30 per cent more than last year to help address the dramatic humanitarian situation in Yemen,” the UN Secretary-General said. “From $2 billion in the pledging conference of 2018, to U$2.6 billion in the pledging conference of 2019. Several countries have naturally increased their contributions, but I think it is fair to say that the two most relevant elements in this increase came from the Kingdom of Saudi Arabia and the United Arab Emirates.”

Nearly four years since fighting escalated in Yemen, civilians continue to suffer most.

“Tens of thousands of people have bene killed or injured since the conflict escalated, many of them civilians,” Mr. Guterres said. “Many more have died from preventable diseases, exacerbated by malnutrition.” He noted that around 20 million are unable to “reliably feed themselves or their families”, adding that “almost 10 million are just one step away from famine.”

360,000 Yemini children ‘fighting for their lives every day’

Highlighting the impact on the youngest Yemenis, the UN chief noted that “children did not start the war in Yemen, but they are paying the highest price. Some 360,000 children are suffering from severe acute malnutrition, fighting for their lives every day. One credible report puts the number of children under-five who have died of starvation, at more than 80,000.”

Conference co-host Sweden’s Foreign Minister Margaret Walstrom described a similarly dire situation in the country, which was already one of the poorest in the world before violence cut desperately needed imports of food, fuel and medicine.

Citing the latest food security data, which is known officially as the Integrated Food Security Phase Classification (IPC) index, she said: “We must now face the shocking fact that 240,000 people, according to newly published IPC report, are in Category 5, meaning that they are facing starvation. Ten million people don’t know where to find their next meal, and as so often is the case, women and girls find themselves in a particularly vulnerable situation…Women eat last and least.”

Speaking on behalf of second co-host Switzerland, Vice-President Simonetta Sommaruga confirmed that the Confederation’s near $15 million contribution for 2019 would focus on the protection of civilians and sustainable support for Yemen:

“Our strategy for co-operation, which covers four years, is up to 54 million francs in total,” she said. “In Yemen, Switzerland is focusing on the areas where it has particular expertise such as the water sector, protection of the civilian population and food security.”

Referring to the UN-brokered ceasefire agreement signed between the Yemeni Government and Houthi opposition in December, Mr. Guterres acknowledged that significant challenges remained in implementing a withdrawal from the key Red Sea port of Hudaydah.

UN Photo/Jean-Marc Ferré
Secretary-General António Guterres during press conference after on the High-Level Pledging Event for the humanitarian crisis in Yemen 26 February 2019.

“We had an important moment in Stockholm, in which it was possible to agree on a ceasefire in Hodeida and a number of other aspects,” he said. “We know that there is a hope for the end of the conflict, but we know that we are also facing many obstacles in the implementation of the Stockholm Agreement.”

Mr. Guterres also rejected suggestions that the UN was ignoring human rights concerns in Yemen while the Kingdom of Saudi Arabia, the UAE “and other countries”, provided military support for the Government of Yemen: “We are not disregarding the war that exists and the fact that a number of countries, not only the one that you mentioned, have had direct impact on that war," he said.

"Obviously, what we want is to end the war and to end all the consequences of the war: the people that are killed, the people that suffer from all other kind of impacts. Independently of that, today we had the pledging conference to address humanitarian needs.”

The 2019 Humanitarian Response Plan for Yemen requires $4 billion to reach 21.4 million people who are barely surviving. More than half of the funding is destined for emergency food aid for 12 million people - a 50 per cent increase compared to last year. 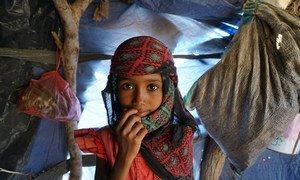