NASA
The Earth, an image created from photographs taken by the Suomi NPP satellite.

The IPCC, or Intergovernmental Panel on Climate Change (IPCC), issued the report from Incheon, Republic of Korea, where for the past week, hundreds of scientists and government representatives have been poring over thousands of inputs to paint a picture of what could happen to the planet and its population with global warming of 1.5°C (or 2.7 degrees Fahrenheit).

Limiting global warming will require “far-reaching and unprecedented changes” to human behaviour, according to the panel. "We are already seeing the consequences of 1°C of global warming through more extreme weather, rising sea levels and diminishing Arctic sea ice, among other changes,” said Panmao Zhai, Co-Chair of one of the IPCC Working Groups.

This report by the world’s leading climate scientists is an ear-splitting wake-up call to the world. It confirms that climate change is running faster than we are – and we are running out of time - UN chief Guterres

The landmark Paris Agreement adopted in December 2015 by 195 nations at the 21st Conference of the Parties to the UN Framework Convention on Climate Change (UNFCCC), included the aim of strengthening the global response to the threat of climate  change by “holding the increase in the global average temperature to well below 2°C above pre-industrial levels and pursuing efforts to limit the temperature increase to 1.5°C above pre-industrial levels.”

Tweeting shortly after the report was launched, UN Secretary-General António Guterres said that it is not impossible to limit global warming to 1.5°C, according to the report. "But it will require unprecedented and collective climate action in all areas. There is no time to waste."

In a statement released later in the day, Mr. Guterres said that getting there, would require "urgent and far more ambitious action to cut emissions by half by 2030, and reach net zero emissions by 2050."

"This will take unprecedented changes in all aspects of society – especially in key sectors such as land, energy, industry, buildings, transport and cities," he said, adding that "we need to end deforestation and plant billions of trees; drastically reduce the use of fossil fuels and phase out coal by 2050; ramp up installation of wind and solar power; invest in climate-friendly sustainable agriculture; and consider new technologies such as carbon capture and storage.

"The coming period is critical. We must meet the Paris commitments to bend the emissions curve by 2020

Petteri Taalas, Secretary-General of the World Meteorological Organization (WMO), said on Monday in Geneva that there was "extreme urgency" needed on the part of Paris Agreement signatories, and "so far the progress hasn't been good enough" to keep temperature rises below even 2°.

“There will be 420 million people less suffering because of climate change if we would be able to limit the warming to 1.5°C level and we have certain areas in the world which are extremely sensitive,” Mr. Taalas said. “Small island states, (the) Mediterranean region and also sub-Saharan Africa is already suffering and will suffer more in the future.”

It is still possible to limit global warming to 1.5°C, the WMO official continued, “but we should change many things how we run our everyday business today”.

Also in Geneva, a UN rights expert warned that failing to do more to address climate change risked “locking in decades” of grave violations.

“Climate change is having - and will have - devastating effects on a wide range of human rights, including rights to life, health, food, housing, and water, as well as the right to a healthy environment,” said David Boyd, Special Rapporteur on human rights and the environment.

“The world is already witnessing the impacts of climate change — from hurricanes in America, heat waves in Europe, droughts in Africa to floods in Asia.”

Half a degree is a big deal

The report highlights a number of climate change impacts that could be avoided by limiting global warming to 1.5°C compared to 2°C, or more.

#IPCC working group co-chair @valmasdel: Net zero emissions of CO2 must reach zero by 2050. That is the most important finding of the report. We are at a crossroads. What happens between now and 2030 is critical. #SR15 #climatechange pic.twitter.com/y8GGBJRRqG

Moreover, coral reefs, already threatened, would decline by 70-90 percent with global warming of 1.5°C, whereas virtually all  would be lost with 2°C, according to the report.

“Every extra bit of warming matters, especially since warming of 1.5°C or higher, increases the risk associated with long-lasting or irreversible changes, such as the loss of some ecosystems,” said Hans-Otto Pörtner, Co-Chair of IPCC Working Group II.

Limiting warming ‘possible' but we need to move faster

“Limiting warming to 1.5°C is possible within the laws of chemistry and physics but doing so would require unprecedented changes,” said Jim Skea, Co-Chair of IPCC Working Group III.

With that in mind, the report calls for huge changes in land, energy, industry, buildings, and transportation-use and across cities everywhere. Global net emissions of carbon dioxide would need to fall by 45 per cent from 2010 levels by 2030, and reach "net zero" around 2050.

But the report warns that “the effectiveness of such techniques are unproven at large scale and some may carry significant risks for sustainable development.”

“Limiting global warming to 1.5°C compared with 2°C would reduce challenging impacts on ecosystems, human health and well-being, making it easier to achieve the United Nations Sustainable Development Goals (SDGs),” said Priyardarshi Shukla, Co-Chair of IPCC Working Group III, referring to the 17 Goals adopted by UN Member States three years ago to protect the planet and ensure that all people enjoy peace and prosperity by 2030.

The new report will feed into a process called the ‘Talanoa Dialogue,’ in which parties to the Paris accord will take stock of what has been accomplished over the past three years. The dialogue will be a part of the next UNFCCC conference of States parties, known by the shorthand COP 24, which will  meet in Katowice, Poland, this December.

The UN Secretary-General said that the Katowice conference was a "can’t-fail moment."

"The international community must emerge with critically important implementation guidelines for operationalizing the Paris Agreement," he said, adding that all countries now needed to "heed the counsel of the world’s top scientists: raise ambition, rapidly strengthen their national climate action plans, and urgently accelerate implementation of the Paris Agreement." 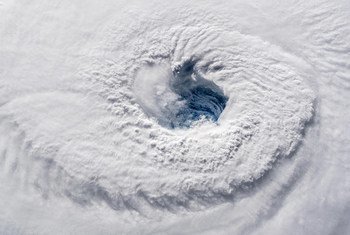 Scientists from the United Nations-run Intergovernmental Panel on Climate Change (IPCC) and representatives from its 195 member governments, are meeting in South Korea, to reach agreement over a key summary for policymakers into the impact of a 1.5 degree Celsius increase in global warming, above pre-industrial levels. 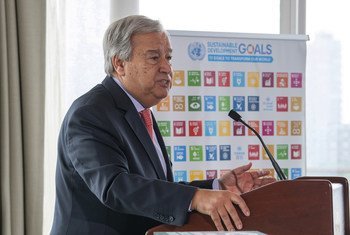