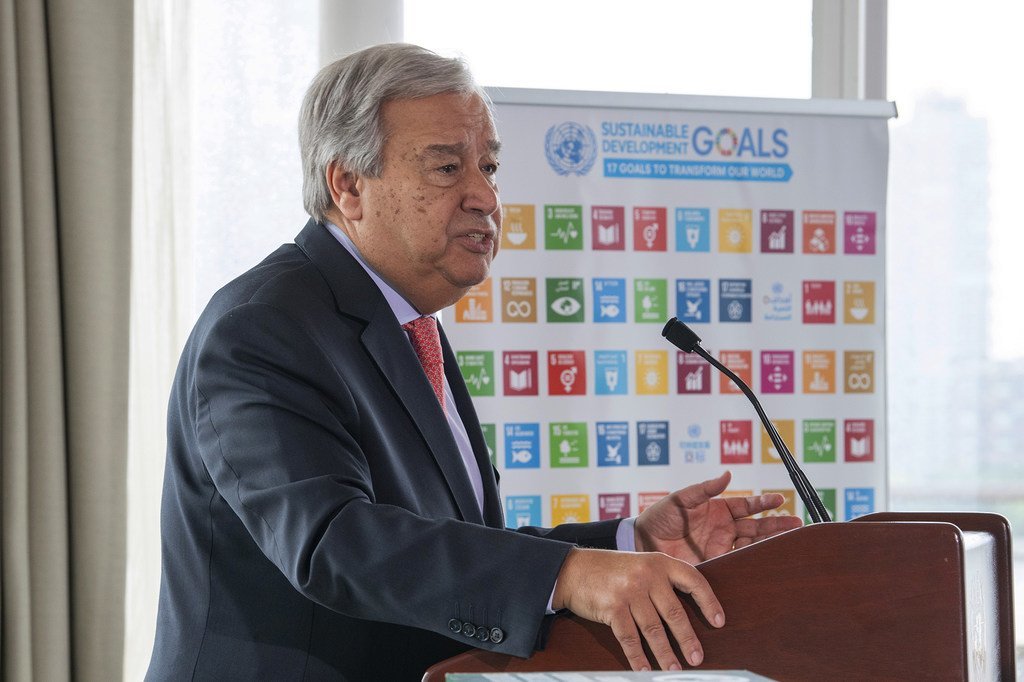 The pledge made by world leaders in the Paris Agreement three years ago to stop temperature rising by less than 2-degree-Celsius and working to keep the increase as close as possible to 1.5-degree-Celsius, “were really the bare minimum to avoid the worst impacts of climate change,” said Secretary-General Guterres, in a landmark speech on climate action, at UN Headquarters in New York.

“The mountain in front of us is very high but it is not insurmountable. We know how to scale it,” he continued.

“Put simply, we need to put the brake on deadly greenhouse gas emissions and drive climate action,” he added, calling for a shift away from the dependency on fossil fuels towards cleaner energy and away from deforestation to more efficient use of resources.

The UN chief went on to say that such a shift in thinking is where “enormous benefits await humankind.”

“I have heard the argument – usually from vested interests – that tackling climate change is expensive and could harm economic growth. This is hogwash. In fact, the opposite is true,” he stressed.

In his message, Mr. Guterres highlighted the huge economic costs of climate change and the opportunities presented by climate action.

UN Photo/Eskinder Debebe
A family in Uvs Province, Mongolia, using a solar panel to generate power for their ger, a traditional Mongolian tent

“Climate action and socio-economic progress are mutually supportive, with gains of 26 trillion dollars predicted by 2030 compared with business as usual, if we pursue the right path,” he said, citing the findings of the recent Climate Economy report from the Global Commission on the Economy and Climate Change.

“Climate-resilient water supply and sanitation could save the lives of more than 360,000 infants every year, clean air has vast benefits for public health [and] in China and the United States, new renewable energy jobs now outstrip those created in the oil and gas industries,” explained Mr. Guterres, noting several examples from across the world of climate action resulting in enormous benefits for countries and communities.

Underscoring that important strides are being made, the UN chief highlighted the imperative to speed up these transitions.

There is another reason to act – moral duty … the world’s richest nations are the most responsible for the climate crisis, yet the effects are being felt first and worst by the poorest nations and the most vulnerable peoples and communities

“And for that to happen, the leaders of the world need to step up. The private sector, of course, is poised to move, and many are doing so.

In his remarks, Secretary-General Guterres highlighted the skewed impact of the climate crisis on vulnerable nations and urged richer countries to do more to assist them.

Looking ahead, the UN chief emphasized that he would be reiterating this message at the General Assembly’s high level segment later in the month as well as at other key events, including the G7 and G20 meetings of world leaders; and the World Bank and International Monetary Fund (IMF) meetings.

UN Photo/Rick Bajornas
In 2017, Secretary-General António Guterres walks through a neighbourhood destroyed by back-to-back hurricanes in Codrington town, Antigua and Barbuda. He visited the country to survey the devastation and offer support from the Organization.

Mr. Guterres further announced that in September 2019, he will convene a Climate Summit to bring climate action to the top of the international agenda and unveiled the appointment of Luis Alfonso de Alba, a former Mexican diplomat, as his Special Envoy to lead its preparations.

The Summit, he said, will focus on the heart of the problem – the sectors that create the most emissions and the areas where building resilience could make the biggest difference – as well as provide leaders and partners the opportunity to demonstrate real climate action and showcase their ambition.

“I am calling on all leaders to come to next year’s Climate Summit prepared to report not only on what they are doing, but what more they intend to do when they convene in 2020 for the UN climate conference and where commitments will be renewed and surely ambitiously increased,” he said.

In the same vein, the Secretary-General called on civil society and young people to push the agenda of climate action.

“There is no more time to waste. We are careering towards the edge of the abyss,” warned Mr. Guterres, adding that though it is not too late to shift course, “every day that passes means the world heats up a little more and the cost of our inaction mounts.”

“Every day we fail to act is a day that we step a little closer towards a fate that none of us wants – a fate that will resonate through generations in the damage done to humankind and life on earth.”