Scott Kelly/NASA
The breaking of dawn over planet Earth, seen from the International Space Station.

Highlighting the importance of space and its applications for humankind, the United Nations is celebrating World Space Week 2018 with a focus on the role the cosmos plays in bringing people together, back on earth.

“Space Unites the World,” the theme for World Space Week (WSW) 2018 is inspired by UNISPACE+50 – a UN conference in June this year – that brought together leaders in exploration, and experts on space applications from all over the globe.

In addition to promoting cooperation between space-faring and emerging space nations, UNISPACE+50 saw Member Sates pledge their collective efforts to enhance the ways space science is used for sustainable development.

► READ ALSO: If we can build the International Space Station, ‘we can do anything’ – UN Champion for Space

Marked annually from 4-10 October, World Space Week commemorates the launch of Sputnik I, the first artificial satellite to be put into orbit, by the Soviet Union, on 4 October 1957, as well as the entry into force just over a decade later, of what’s formally-known as the Treaty on Principles Governing the Activities of States in the Exploration and Use of Outer Space, including the Moon and Other Celestial Bodies.

Since 2007, over 94 nations have participated in more than 2,250 Space Week events, drawing more than 1.3 million attendees.

Major events this year include:

Space boost for women and girls, in STEM fields

The Bangladesh event shows the emphasis being placed during Space Week on encouraging young women and girls to take up space science and the so-called STEM fields overall - science, technology, engineering and mathematics.

Speaking at UNISPACE+50, from the International Space Station – at a height of over 400 kilometres in low-Earth orbit – US astronaut Serena Auñón-Chancellor, offered some excellent advice for girls and young women wishing to pursue careers in the STEM fields but feel ambivalent asking questions or learning more people those already established.

“I tell them…bother people” she said. “Bother them if you are interested in their work and research, get them to tell you about it, ask questions … explore, discover and that is the best way for young girls and women to get interested in STEM fields.”

Photo Gallery: Space for a better future, the journey of UNISPACE+50

Click here to view the gallery in full screen mode 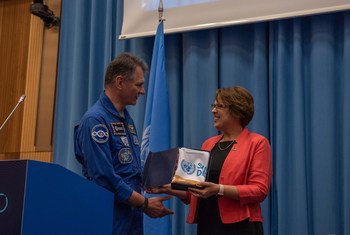 Not only has space exploration captured the world’s imagination, it can also help humankind address existential challenges back on earth, United Nations Secretary-General António Guterres said on Wednesday, in his message to the UN’s key forum on space affairs.