Floating in near zero-gravity, 400 kilometres above the Pacific Ocean and flying at over 28,000 kilometres per hour, the six crew members onboard the International Space Station (ISS) joined the key United Nations forum on outer space affairs via video link on Wednesday, to discuss the importance of working together.

NASA astronauts Drew Feustel, Ricky Arnold and Serena Auñón-Chancellor; Russian cosmonauts Oleg Artemyev and Sergey Prokopyev; together with European Space Agency astronaut Alexander Gerst, hovered in front of their national flags, as an ecstatic audience cheered and took “selfies” with them on screens in the main hall where the Committee on the Peaceful Uses of Outer Space was meeting in Vienna, as part of the UNISPACE+50 forum.

“Peace for our planet,” he declared, as the audience erupted in applause.

Commander Feustel highlighted the importance of everyone having access to space:

“I hope that as we continue forward as an international group, that we will all put our common thoughts and rational thoughts” in how space is used, together, he said, recognizing “that the goal should not necessarily be to dominate space, but to help facilitate access so that we as a species – not just as individual nations or individual people – can continue on into the future.”

With their feet planted firmly on the ground in the Austrian capital, UN Office for Outer Space Affairs (UNOOSA) Director Simonetta Di Pippo, together with UN Champion for Space, Scott Kelly (himself a former NASA astronaut), and NASA Chief Scientist Jim Green, led the discussion.

Explore ... discover and that is the best way for young girls and women to get interested in STEM fields – Astronaut Serena Auñón-Chancellor

Astronaut Serena Auñón-Chancellor had some advice for young women and girls wishing to pursue careers in the STEM fields – science, technology, engineer and mathematics – who are feeling ambivalent about promoting themselves, and a career in space science.

“I tell them…bother people” she said. “Bother them if you are interested in their work and research, get them to tell you about it, ask questions … explore, discover and that is the best way for young girls and women to get interested in STEM fields.”

In response a question on the importance of international cooperation in space exploration, Commander Feustel, explained that such partnership not only helps keep costs down, but also helps develop technologies and innovations which are vital for space exploration.

“All of our partners have a great experience in space and they are all very different experiences. What we are doing right now requires all these different assets come together,” he said.

Cosmonaut Sergey Prokopyev told the awe-struck audience – jaws dropping in disbelief – about some of the new technologies being used or tested in space.

He spoke about the urine processor onboard the ISS; a vital piece of equipment that turns urine and body fluids like sweat, into potable water.

“This is a very interesting experiment and equipment … this will help people understand habitation patterns of wild animals,” he said.

UN News/Vibhu Mishra
Astronaut Ricky Arnold grabs the mic before it drifts too far away.

Preparing the ground-work for traveling into the Solar System

Answering a question on how the work onboard the ISS improves live back home on earth, Astronaut Ricky Arnold cited examples ranging from gaining a better understanding on how the planet functions, and developing new medicines, to preparing the ground work on how the human body reacts to conditions in space.

“Our bodies change and if we are going to go out into the Solar System and be a multiplanetary species … we have to understand how these changes occur and how we can protect the people we send out to explore the Solar System,” he said.

Future in space depends on partnerships

German astronaut Alexander Gerst took a question on how countries that are new to space, could engage in exploration that would benefit the world.

We built the International Space Station with modules from different countries … more than 100,000 people built this – German astronaut Alexander Gerst

The “key” to answering that, he said, was to look at the International Space Station.

“We built the International Space Station with modules from different countries … more than 100,000 people built this.”

Future success in space depends on partnerships, he said, suggesting that new countries can partner with experienced ones to build new modules, for example, and continue to develop the International Space Station for more advanced undertakings.

UN News/Runa A.
Astronauts wave bye before signing off from the video conference call.

The live video conference was a part of the high-level segment of UNISPACE+50, a forum commemorating the fiftieth anniversary of the ground-breaking 1968 UN Conference on the Exploration and Peaceful Uses of Outer Space, or UNISPACE for short.

The call, routed through NASA’s Johnson Space Center, was the first time since 1995 that space travelers had been part of a UN event. That year, as part of the fiftieth anniversary of the United Nations, then-Secretary-General Boutros Boutros-Ghali, talked via video to the crew of the second Shuttle-Mir Docking mission.

In 1962, the General Assembly adopted a resolution calling on all Member States to regard astronauts as envoys of all humankind in outer space, and give them all the help and support that that entails.

♦ Receive daily updates directly in your inbox - Subscribe here to a topic.
♦ Download the UN News app for your iOS or Android devices.
UNISPACE50|outer space 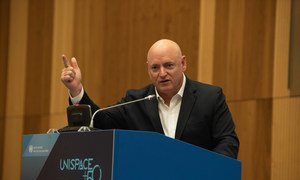 The sight of Earth, from hundreds of kilometers away in open space while you are tethered only to the International Space Station, is “absolutely amazing”, said Scott Kelly, the UN Champion for Space and former US astronaut, stressing that the world we live on “is our only planet.”