Not only has space exploration captured the world’s imagination, it can also help humankind address existential challenges back on earth, United Nations Secretary-General António Guterres said on Wednesday, in his message to the UN’s key forum on space affairs.

In a video message to the opening of the high-level session of UNISPACE+50, the UN’s main forum to discuss the peaceful uses of outer space, Mr. Guterres highlighted that despite major political differences on the ground, “countries have worked together for progress in outer space.”

The collaboration has led to “great scientific and technological achievements,” he continued.

“We must ensure that everyone can access and benefit” from advanced space technologies, added the UN chief.

Taking place in the Austrian capital, Vienna, UNISPACE+50 commemorates the 50th anniversary of the 1968 UN Conference on the Exploration and Peaceful Uses of Outer Space, which was also held in the same city.

Also addressing the opening segment, Alexander Van der Bellen, the President of Austria, underscored that space will become a crucial driver for sustainable development, and the collective mission to reach the 17 Sustainable Development Goals (SDGs) by 2030.

Space technology can play a “crucial role” in addressing the complex and diverse challenges which confront us all, he said, ranging from natural disasters to devastating impacts of climate change.

In addition, with many new actors entering the space field and breaking new ground in uses of space, humankind needs “to ensure that space resources are used for peaceful purposes only, and in a sustainable manner compatible with international law”, urged the Austrian President.

Yury Fedotov, the Director General of the UN Office at Vienna, also highlighted the importance of global space cooperation and governance, to the SDGs.

“The benefits of space encompass every aspect of our lives, from agriculture and health, to disaster mitigation and humanitarian assistance,” he said, noting that deliberations at the forum would strengthen the role of space as an “inclusive tool” to promote global development.

Simoneta Di Pippo, the Director of the UN Office of Outer Space Affairs (UNOOSA), which is organizing UNISPACE+50, highlighted a draft resolution concerning use of space in sustainable development that will be presented to the General Assembly for adoption in October.

“The vision and actions contained in the agreed text of the draft resolution to continue to develop the ‘Space2030’ agenda and its implementation plan will set the course for strengthening the contribution of space activities and space tools to achieving internationally agreed development goals,” she said.

The draft resolution was endorsed later in the day by the UN Committee on Peaceful Uses of Outer Space, which began its 61st session the same day.

Also on Wednesday, the UN Champion for Space Scott Kelly, who as a NASA astronaut spent more than a year in space, unveiled a set of special commemorative stamps, marking UNISPACE+50.

The stamps “represent humankind’s achievements in space,” said Mr. Kelly, noting the benefits that space brings to life below.

“As United Nations Champion for Space, I am also personally honoured to feature on one of these stamps, as a representative of all human space explorers, past, present and future,” he added.

The stamps have been officially released by the UN Postal Adminstration and can be used to mail letters or other postage from any UN post office to any address in the world.

UN News, currently in Vienna covering UNISPACE+50, had a whimsical question for one of the UNPA representatives attending the unveiling. Did they think the stamp could someday be used to mail letters to an address beyond the earth’s orbit?

“Definitely,” was the emphatic answer.

♦ Receive daily updates directly in your inbox - Subscribe here to a topic.
♦ Download the UN News app for your iOS or Android devices.
UNISPACE50|outer space|sustainable development 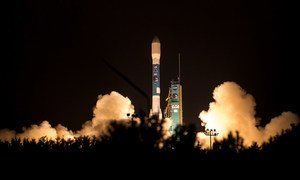 On its opening day, a major United Nations forum on the peaceful uses of outer space, was issued a clear challenge to break through the so-called “glass ceiling” that prevents women and girls from achieving their full potential; especially in the field of science, technology, engineering and mathematics.