UN Secretary-General António Guterres on Tuesday praised India’s progress on implementing the Sustainable Development Goals (SDGs), in particular the pursuit of Sanitation for All and Affordable and Clean Energy, which featured heavily during day-two of his official visit to the country.

Speaking at the closing session of the Mahatma Gandhi International Sanitation Convention in New Delhi, Mr. Guterres noted Gandhi’s long record of advocacy and action on the issue, adding that the decision to begin marking the 150th anniversary of Gandhi’s birth – which takes place on 2 October next year – with the Convention, was a “fitting tribute to this great human being and example to us all.”

An estimated 2.3 billion people, said Mr. Guterres, still do not have basic sanitation facilities. Almost 1 billion defecate in the open, a practice that “poses a serious threat to children, contributing to diarrhoea and to malnutrition and stunting that has a lifelong impact.”

The UN chief outlined some of the many consequences and risks of poor sanitation, including disease, stunting and indignity, and pointed out that it “exacerbates inequalities between men and women, rich and poor, city and countryside. And it has major implications for human rights and human dignity.”

He said that women and girls are disproportionately impacted, as they may face an increased risk of harassment and abuse, and higher health risks due to a lack of access to sanitation facilities.

Mr. Guterres went on to praise the Indian Government’s Clean India Mission, which seeks to achieve universal sanitation coverage, as the largest investment and largest mobilization campaign in the world.

He added that “All people have the right to safe water and sanitation. If we are to build resilient societies on a healthy planet and achieve the overarching ambition of the 2030 Agenda for Sustainable Development, we must tackle this issue urgently, as is being done in India.”

The country, said Mr. Guterres, is well on target to reach the SDG of Sanitation for All – including for women, children, young people, people with disabilities, the elderly, indigenous peoples, the homeless, refugees and migrants – before 2030.

On Tuesday evening, the Secretary-General addressed the first general assembly of the International Solar Alliance, an organization initiated several years ago by the Governments of India and France in the build up to the 2015 United Nations Climate Change Conference, which describes itself as a coalition of solar resource-rich countries.

The UN chief lamented the lack of political commitments to make the transformative decisions that will help to meet the goals set in the Paris Agreement: current commitments are falling far short of meeting the target of limiting global warming to well below 2 degrees Celsius and striving for 1.5 degrees.

At the same time, he said, the world is witnessing a “global renewable energy revolution,” with solar energy; now competitive with - and often cheaper than - fossil fuels, at the centre.

Renewables accounted for some 70 per cent of net additions to global power in 2017, and India has set a goal to mobilize $1 trillion towards the deployment of 1,000 gigawatts of solar energy by 2030.

Despite these positive developments, Mr. Guterres said that if we do not change course by 2002, we risk missing the opportunity to avoid “runaway climate change.”

This, he said, is why he is convening next September’s UN Climate Summit, with the aim of bringing climate action to the top of the international agenda, providing leaders and stakeholders with the opportunity to showcase their ambition.

Also on Tuesday, Mr. Guterres held a bilateral meeting with Prime Minister Narendra Modi, during which he thanked Mr. Modi for the strong cooperation between India and the UN, especially in support of the UN chief’s organizational reform effort. The Secretary-General also underscored the leadership role that India plays in South-South Cooperation.

The Secretary-General also addressed a group of young people at the India Habitat Centre, where he spoke to them about global challenges and answered questions on challenges facing the international community, including the trust-deficit, growing attacks on multilateralism and climate change. 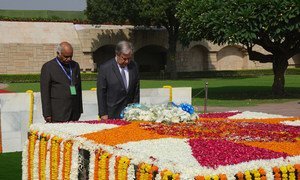 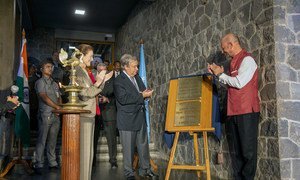 The United Nations Secretary-General, António Guterres, took part on Monday in the opening ceremony of the Organization’s newly-refurbished headquarters for its multi-agency operations, known as UN House, in the Indian capital, New Delhi.