In his address to the UN General Assembly’s general debate on Friday, the Prime Minister of India outlined how the world’s largest democracy has embodied the Sustainable Development Goals (SDGs) in its work towards “peace, development and progress in the world”.

Narendra Modi painted a picture of a rapidly changing India that in five years has built over 110 million toilets and opened over 370 million bank accounts for the poor.

India has given “the world new hope” by launching the planet’s biggest digital identification programme for its citizens – saving more than $20 billion by checking corruption, he said.

What’s more, “when a developing country, successfully runs the world’s biggest health assurance scheme, giving 500 million people the facility of an annual health cover of 500,000 Rs [rupees] for free treatment, the achievements and responsive systems that result from this scheme show the world a new path”, he said.

Turning to environmentally friendly endeavours, Mr. Modi proudly stated that a country-wide campaign has begun to make India free of single use plastics.

Moreover, over the next five years, 150 million Indian homes will have a water supply and over 125,000 kilometers of new roads.

“By the year 2022, when India celebrates its 75th Independence Day, we plan to build 20 million houses for the poor”, he said, adding that he also aimed to eradicate Tuberculosis by 2025.

Prime Minister Modi said his country draws inspiration from its motto: “Collective efforts, for growth of all, with everyone’s trust,” asserting that this “is not confined within the borders of India”.

“Our endeavours are neither an expression of pity, nor a pretense”, he maintained, explaining that while they are centered on 1.3 billion Indians, “their fruits are for all, for the entire world”.

From an historic and per capita emission perspective, Mr. Modi maintained that while India’s contribution to global warming is very low, it is “one of the leading nations when it comes to taking steps to address this issue”.

He said it is working towards the target of 450 giga watts of renewable energy, and creating the International Solar Alliance.

Noting that global warming is increasing the number and severity of natural disasters, the Prime Minister told the General Assembly that India has initiated the “Coalition for Disaster Resilient Infrastructure”, to help build infrastructure that can withstand natural disasters.

“India has given the world Buddha’s message of peace, not war. Its voice against terrorism rings with seriousness and outrage, alerting the world about this evil.  Terrorism is one of the biggest threats to the world and all humanity.”

“It is absolutely imperative that the world unites against terrorism,” he said.

In a world sweeping changes sparked by modern technology, he concluded his address by stressing the importance of multilateralism.

“A fragmented world is in the interest of no one”, he said. “In this new era, we will have to give new direction to multilateralism, and to the United Nations”. 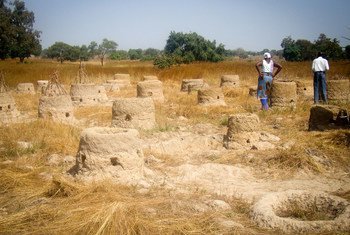