The document, published by the Global Commission on the Economy and Climate – a project comprising several UN bodies, and other institutions – finds that the benefits of smarter and clearer growth are significantly under-estimated, and that bold climate action could deliver $26 trillion in economic benefits through to 2030.

Other benefits of switching to a clean economy include the creation of over 65 million new low-carbon jobs, and 700,000 fewer air pollution-related deaths.

Ngozi Okonjo-Iweala, former Finance Minister of Nigeria and Co-Chair of the Global Commission, said that “policy makers should take their feet off the brakes, send a clear signal that the new growth story is here and that it comes with exciting economic and market opportunities. $26 trillion and a more sustainable planet are on offer if we act decisively now.”

Socio-economic progress and #ClimateAction go hand in hand. The new Climate Economy report shows that for every dollar spent restoring degraded forests, as much as $30 dollars can be recovered in economic benefits. Green business is good business. https://t.co/lq0vVDlQ9j pic.twitter.com/2ti6Arxsux

Speaking at the launch, Secretary-General Guterres said that momentum for climate action is growing every day, with over 130 of the world’s most influential companies now committed to using only renewable energy, fossil fuel-dependent countries looking to diversify, and over 250 investors with $28 trillion in managed assets signing on to the Climate Action 100+ initiative.

Shifting to a sustainable growth path has many other benefits. Climate resilient water supply and sanitation could save the lives of more than 360,000 infants every year, restoring degraded lands means better lives for farmers, and clean air has vast benefits for public health.

Mr. Guterres that clean energy systems help developing countries, where over 1 billion people still do not have access to electricity,” adding that “it can help deliver access to energy to the one billion people who currently lack electricity. For example, Bangladesh has installed more than four million solar home systems. This has created more than 115,000 jobs and saved rural households over $400 million dollars in polluting fuels.”

Lord Nicholas Stern, Economics and Government Professor at the London School of Economics, who also Co-Chairs the Global Commission, said “we know we are grossly underestimating the benefits of this new growth story. And further, it becomes ever more clear that the risks of the damage from climate change are immense, and tipping points, irreversibilities, getting ever closer.”

Underlining the risks faced by the world, the UN chief said that climate change is “running faster than we are”, and that women, the poorest and the most vulnerable are hit first and worst by storms, floods, droughts, wildfires and rising seas.

Mr. Guterres reminded those present that the last 19 years included 18 of the warmest on record, that greenhouse gas concentrations in the atmosphere continue to rise, and that there is still a significant gap between national commitments to lower emissions, and actual reductions.

The Secretary-General told those present that climate change will be high on the agenda of the 2018 opening session of the General Assembly, as part of efforts to galvanise action ahead of the milestone 2020 meeting of parties to the 2015 Paris Agreement. 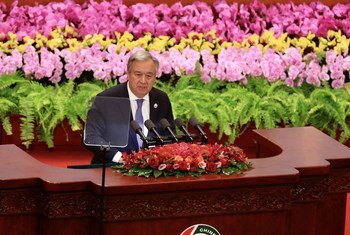 In Beijing, UN chief urges win-win collaboration between China and Africa for ‘the future we want’

Highlighting the economic and development progress made in China and Africa, United Nations Secretary-General António Guterres urged them to unite their combined potential for peaceful, sustainable and equitable progress to the benefit of all humankind. 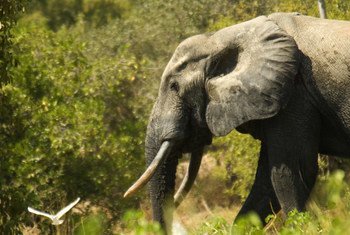 Calling 2017 “the first year in human history” that more new clean energy was added to the grid than new oil, gas and coal combined, Erik Solheim, Executive Director of the UN Environment Programme (UNEP) has told UN News that “we are on track” but “we really need to speed up”.