UNHCR/B. Sokol
An elderly refugee is given medical care on arrival at a camp in South Sudan.

9 November 2012
The United Nations refugee agency today warned that efforts to contain a Hepatitis E outbreak in South Sudan is being threatened due to lack of funding, and concern is growing with thousands more refugees expected to arrive in the country in the coming weeks.

The United Nations refugee agency today warned that efforts to contain a Hepatitis E outbreak in South Sudan is being threatened due to lack of funding, and concern is growing with thousands more refugees expected to arrive in the country in the coming weeks.

“The risks will grow if, as currently anticipated, we see fresh inflows of refugees from South Kordofan and Blue Nile states in neighbouring Sudan,” the spokesperson for the Office of the UN High Commissioner for Refugees (UNHCR), Adrian Edwards, told reporters in Geneva.

“The South Sudan operation is seriously underfunded,” Mr. Edwards stressed, noting that the agency needs a minimum of $20 million until the end of the year to ensure life-saving activities. Only 40 per cent of the agency’s revised appeal for $186 million has been received so far.

UNHCR and its partners are currently fighting an outbreak of Hepatitis E in Upper Nile and Unity states, two regions where the disease is endemic and where 175,000 Sudanese refugees are settled in the wake of insecurity and worsening humanitarian conditions.

So far there are 1,050 cases of Hepatitis E – a virus contracted and spread through consuming contaminated food and water – in the refugee camps. The disease damages the liver and can be fatal. To date, 26 refugees have died in camps in Upper Nile.

“The risk of infection is high in densely populated settings such as refugee camps,” said Mr. Edwards. “This is further exacerbated in the rainy season due to flooding and poor sanitation. Women and small children are the most vulnerable.”

He stressed that early diagnosis is crucial for the survival of patients. UNHCR is working with the United States Centers for Disease Control, which has sent six staff to test water and blood samples and conduct house-to-house interviews on hygiene practices.

To counter the spread of the disease among the 175,000 Sudanese refugees already in South Sudan, UNHCR is promoting better hygiene practices through hundreds of trained community workers.

It is also working to improve the supply of clean water in the camps, as well as upgrade latrine stances, and provide more hand washing-stations and soap.

While these measures have helped to slow the spread of the disease, UNHCR said it is struggling to meet the minimum humanitarian standards, such as the provision of 15 to 20 litres of safe drinking water per refugee per day or building enough latrines so that each unit is shared by no more than 20 refugees.

Due to the insecurity and humanitarian conditions in Sudan’s South Kordofan and Blue Nile states, UNHCR expects thousands of new refugees to cross in the next weeks.

On first field visit to Darfur, UN official flags need to do more with fewer resources 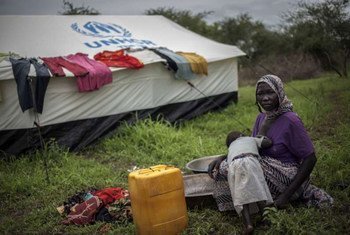 14 September 2012
The United Nations is working with the Government of South Sudan and other partners to control the spread of Hepatitis E, which has killed 16 refugees in three camps in the country’s Upper Nile state.