UNHCR/B. Sokol
A Sudanese refugee with her daughter at the Gendrassa camp, where one person died of Hepatitis E.

14 September 2012
The United Nations is working with the Government of South Sudan and other partners to control the spread of Hepatitis E, which has killed 16 refugees in three camps in the country’s Upper Nile state.

There have been 23 confirmed cases of Hepatitis E in the Jamam, Yusuf Batil and Gendrassa camps located in the northeastern part of the country, according to the Office of the UN High Commissioner for Refugees (UNHCR).

Addressing a media briefing in Geneva, a UNHCR spokesperson, Adrian Edwards, said there had been signs of patients with acute jaundice syndrome, or yellow pigmentation of the skin, at the Jamam camp since July. Jaundice can be one symptom of Hepatitis E, which is a virus that damages the liver, and is transmitted by eating food or drinking water contaminated with faeces.

There are close to 170,000 Sudanese refugees currently in South Sudan, more than half of them located in the Upper Nile state. They have arrived from Sudan’s South Kordofan and Blue Nile states after fleeing conflict and food shortages over recent months.

Of the 16 deaths reported by the refugee agency, 13 have occurred at Jamam camp, home to some 20,000 refugees, and where 255 cases of jaundice syndrome have been recorded. Two people have died at Yuduf Batil camp and one at Gendrassa camp.

“Hepatitis E hits young people between the ages of 15 and 40 hardest. In the three camps where we see refugees with acute jaundice syndrome, more than half are between 20 and 39,” Mr. Edwards told reporters in Geneva. “Hepatitis E is particularly dangerous for pregnant women; their death rate can be 20-25 per cent. Among the refugees who have died were five pregnant women.”

UNHCR and the World Health Organization (WHO) are improving sanitation in the camps and increasing the amount of available drinking water as flooding and contaminated surface water pose a health risk to refugees, Mr. Edward said.

The agencies are also promoting improvements in hygiene practices in the camps, advising refugees to avoid drinking untreated water, eating raw food or food washed in unclean water, and washing in communal containers.

“We are promoting good practices like hand-washing, not defecating in the open, and not letting animals defecate close to homes,” Mr. Edwards noted, adding that so far there have been no cases among the local population.

UNHCR is currently seeking $186 million in funding to provide the Sudanese refugees with assistance. However, the agency has only received 40 per cent of this amount. 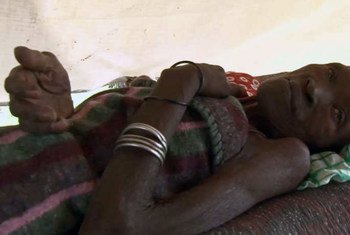 24 August 2012
The United Nations refugee agency today voiced alarm about the health situation of more than 100,000 refugees spread out across two states in South Sudan.