9 November 2012
The United Nations human rights chief today urged South Sudan to reverse the expulsion of a human rights officer in the country, noting that the action is in breach of international agreements and that the authorities have not yet provided any satisfactory evidence for it.

“I urge the Government of South Sudan to reverse its expulsion order and find a solution to this unfortunate episode, which contradicts the Government’s publicly stated commitment to human rights,” the UN High Commissioner for Human Rights, Navi Pillay, said in a news release.

The staff member, who works with the UN Mission in South Sudan (UNMISS), is currently at the UN Regional Service Centre in Entebbe, Uganda, pending a decision on her future status.

“In the two weeks since she was expelled, the authorities have so far not provided the UN with any satisfactory evidence of serious misconduct by the staff member,” said Ms. Pillay. “The Government therefore appears to be in breach of its legal obligations under the UN Charter and under the 2011 Status of Forces Agreement between the Government of South Sudan and the UN concerning UNMISS.”

Ms. Pillay noted that the authorities, when they ordered the staff member to leave the country, accused her of misinforming the international community about human rights abuses. This was “utterly unsatisfactory and unacceptable,” she stated.

“If the Government has issues with the contents of a report, or with the manner in which the information is collected, they should be raised with UNMISS and with my office,” said the High Commissioner.

“The regular activities of a UN human rights officer cannot and should not be considered as serious misconduct or a criminal activity,” she added. “The promotion and protection of human rights is an essential element in a country’s development and the establishment of rule of law.”

South Sudan became independent from Sudan in July last year, six years after the signing of the peace agreement that ended decades of warfare between the north and the south. During the same month, the Security Council established the peacekeeping operation UNMISS with the purpose of consolidating peace and security and to help establish conditions for development.

Ms. Pillay called on the new State “to take urgent steps to ensure that the authorities at all levels respect their international obligations, both in terms of their treatment of UN staff and in their application of international laws and standards.”

She also voiced support for the efforts of the Secretary-General’s Special Representative and head of UNMISS, Hilde Johnson, to resolve the situation, including her repeated requests to the Government to explain its actions.

On first field visit to Darfur, UN official flags need to do more with fewer resources 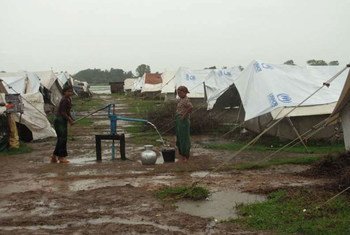 5 November 2012
The security situation in Myanmar's Rakhine province is still tense after a recent wave of violence which began in October, the United Nations humanitarian agency said today, adding that more than 110,000 displaced people are in urgent need of food, shelter and health care assistance.