South Sudan prepares for its independence on 9 July 2011

7 July 2011
South Sudan, which is just days away from becoming the world’s newest country, will need to develop a broad set of partnerships – with the North, with its neighbours and its own people – to tackle the “daunting” challenges it faces, says Secretary-General Ban Ki-moon.

On 9 July, Mr. Ban and a host of foreign dignitaries will converge on Juba, the capital of the soon-to-be Republic of South Sudan, to watch the new nation raise its flag and inaugurate its first president, Salva Kiir.

South Sudan’s independence follows a referendum held in January in line with the Comprehensive Peace Agreement – the 2005 accord that ended the decades-long North-South civil war in Sudan.

“For the more than eight million citizens of South Sudan, it will be a momentous and emotional day,” the Secretary-General wrote in an op-ed published today in The New York Times ahead of Saturday’s independence ceremony.

“Yet, nationhood has come at steep cost,” he added. “When the assembled presidents and prime ministers board their official planes to return home, the challenges that remain will be daunting indeed.”

On the day of its birth, Mr. Ban noted, South Sudan will rank near the bottom of all recognized human development indices, including the world’s highest maternal mortality rate and a female illiteracy rate of over 80 per cent.

“Critical issues of poverty, insecurity and lack of infrastructure must all be addressed by a relatively new government with little experience and only embryonic institutions,” said Mr. Ban, adding that the risk of increased violence, harm to civilian populations and further humanitarian suffering is “very real.”

At the same time, he noted, South Sudan has remarkable potential, given its substantial oil reserves, huge amounts of arable land and the Nile River flowing through its centre.

“Alone, South Sudan cannot meet these challenges nor realize its potential. Doing so will require partnership – a full (and ongoing) engagement with the international community and, most especially, South Sudan’s neighbours.”

Mr. Ban highlighted the need for the country’s new leaders, first and foremost, to reach out to their counterparts in the Government of Sudan, stressing that strong, peaceful relations with the North are essential.

“A priority for both countries is agreement on their common border, sustainable relations to ensure both States can benefit from the oil revenues in the region, and cross-border arrangements to continue their strong historical, economic and cultural ties,” he stated.

He noted that recent instability in Southern Kordofan and Abyei have strained North-South relations and heightened political rhetoric. “Now is the time for both the North and the South to think of the long-term benefits of working together, not short-term political gains at the other’s expense,” he said.

Speaking to reporters in Geneva, where he is on an official visit, Mr. Ban commended the leadership of both North and South for the progress they have made to date. “And let us emphasize that the path of prosperity and stability lies in peace and partnership – cemented at the negotiating table and supported by the entire international community.”

UN officials have highlighted the grave humanitarian impact of the fighting between northern and southern forces in Southern Kordofan that has displaced an estimated 73,000 people since it began a few weeks ago.

Haile Menkerios, the head of the UN peacekeeping mission in Sudan (UNMIS) that is due to end on 9 July, urged both sides to “display the same leadership that allowed the end of the North-South war,” to rapidly end this new confrontation, cease hostilities and resolve all pending disputes through dialogue.

“As in the past, the United Nations stands ready to assist the parties in resolving their differences and implementing new agreements they now must find,” he told a news conference.

According to the UN Office for the Coordination of Humanitarian Affairs (OCHA), the security situation in Southern Kordofan remains tense and volatile, with fighting reported near the main town of Kadugli every day over the past week.

While humanitarian agencies have access to Kadugli town, access to locations outside of Kadugli for aid activities is still being denied, it added. UN agencies such as the World Health Organization (WHO) and the UN Children’s Fund (UNICEF) are continuing to provide assistance where possible. 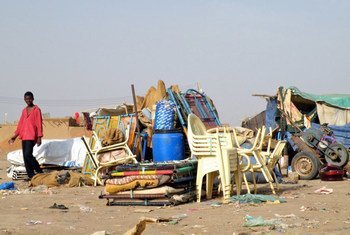 5 July 2011
Four days before South Sudan becomes independent from the rest of Sudan, the United Nations is preparing for the next phase of its role in the region, both on the ground and at Headquarters in New York with the potential addition of a new Member State.