“The African Union is a vital strategic partner to the United Nations,” Mr. Ban said in remarks to a meeting on the UN-AU partnership in peace and security, chaired by President Jacob Zuma of South Africa, which holds the Council’s rotating presidency for this month.

“Over the last decade, the AU and sub-regional organizations have significantly bolstered their own role in building an architecture for peace and security on the African continent,” noted Mr. Ban.

“Together, our collective efforts in conflict prevention and mediation, peacekeeping and peacebuilding are making a real difference throughout the continent,” he stated. “Of course, there is more room for improvement.”

Some examples of cooperation between the UN and the AU include the joint peacekeeping operation in Darfur (UNAMID), combined efforts to combat the threat posed by the Lord’s Resistance Army (LRA) and UN support to the AU peacekeeping force in Somalia (AMISOM).

Mr. Ban said that it is only natural that there will be differences in dealing with complex and fast moving crises.

“Organizations with different mandates, membership, and perspectives will occasionally have differences in approach,” he said. “The question is how we manage those differences – how we work together.”

The UN has strengthened the partnership with the AU in several concrete ways over the past few years, noted Mr. Ban, whose recent report on the subject focuses on building on successes, improving coherence, and harmonizing decision-making from a firm foundation of shared values and principles.

“We must build on what we have achieved to devise and strengthen practical tools so that we can successfully face our common peace and security challenges in Africa together,” he wrote in the report.

Mr. Ban told the Council that the UN-AU partnership can be enhanced further in a number of ways, including by learning new lessons and developing new tools, as well as by intensifying the engagement with civil society and women’s groups active in mediation and conflict prevention, particularly at the local level.

“As we look ahead, we will need to ensure flexibility so that each new situation is addressed on its own merits. We must also promote innovative arrangements in complex situations that may require joint actions, operations, or enhanced partnerships,” he stated.

“As we do so, let us strive to maximize our collective efforts and limited resources, and ensure that each partnership arrangement has a clearly-defined division of labour and roles and responsibilities for each organization,” added the Secretary-General, who will attend the AU Summit later this month.

The meeting heard from numerous delegations, as well as Ramtane Lamamra, AU Commissioner for Peace and Security, who noted that a more strategic relationship between the UN and the AU is made more compelling by the fact that Africa, despite the significant progress made in recent years, still accounts for the highest number of conflicts worldwide.

In addition to the traditional threats, the continent is now facing a new set of threats, including terrorism, maritime piracy, border disputes and climate change, he added.

“Clearly, these challenges require concerted responses by the African Union and the United Nations and a much closer partnership,” stated Mr. Lamamra, who suggested that the two organizations agree on a set of principles aimed at clarifying their relationship and “anchoring it on a more solid platform.”

In a resolution that was adopted unanimously during the meeting, the Council reiterated the importance of establishing “a more effective relationship” between it and the AU Peace and Security Council, including in the area of conflict prevention, resolution and management, electoral assistance and regional conflict prevention offices.

It also encouraged the improvement of regular interaction, consultation and coordination between the two bodies on matters of mutual interest, and decided to elaborate further ways of strengthening relations, including through achieving more effective annual consultative meetings, the holding of timely consultations and collaborative field missions. 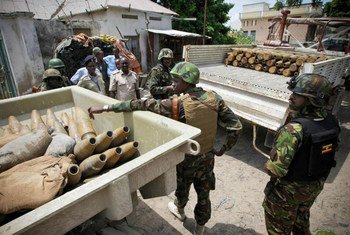 11 January 2012
The Security Council today called for predictable, reliable and timely resources to support the African Union (AU) peacekeeping mission in Somalia to strengthen its capability to help the country’s transitional government implement its commitments to restore peace and stability.