Speaking at the high-level opening of the Conference, Mr. Guterres outlined four recommendations to ensure that the tide is reversed.

We have taken the ocean for granted, and today we face what I would call an “Ocean Emergency”.

Among them, the UN chief underscored the urgent need to invest sustainably in economies that depend on the sea.

Co-hosted by Portugal and Kenya, the event will be a platform to address the challenges that the world’s oceans, seas and marine resources face.

Quoting Portuguese poet Fernando Pessoa, Mr. Guterres, said that his hopes were that the Conference represented a moment of unity for all Member-States.

Highlighting that the ocean connects us all – Secretary-General Guterres said that because we have taken the ocean for granted, today, we face an “Ocean Emergency” and that the tide must be turned.

“Our failure to care for the ocean will have ripple effects across the entire 2030 Agenda,” Mr. Guterres said.

At the last UN Ocean Conference five years ago in New York, delegates called to reverse the decline in ocean health.

Since then, some progress has been made, the UN chief maintained, with new treaties being negotiated to address the global plastic waste crisis that is choking the oceans, and advances in science, in line with the UN Decade of Ocean Science for Sustainable Development (2021-2030).

“But let’s have no illusions. Much more needs to be done by all of us together”, Mr. Guterres stressed, before outlining four key recommendations:

Mr. Guterres urged stakeholders to invest in sustainable ocean economies for food, renewable energy, and livelihoods, through long-term funding, reminding them that out of all the 17 Sustainable Development Goals (SDGs), Goal number 14 had received the least support of any of the SDGs.

“Sustainable ocean management could help the ocean produce as much as six times more food and generate 40 times more renewable energy than it currently does,” the UN Secretary-General said.

Second, he continued, “the ocean must become a model on how we can manage the global commons for our greater good; and this means preventing and reducing marine pollution of all kinds, both from land and sea-based sources”.

The UN chief also called for more protection of the oceans and of the people whose lives and livelihoods depend on them, by addressing climate change and investing in climate-resilient coastal infrastructure.

“The shipping sector should commit to net zero emissions by 2050, and present credible plans to implement these commitments. And we should invest more in restoring and conserving coastal ecosystems, such as mangroves, wetlands, and coral reefs.”, Mr. Guterres stressed.

Inviting all Member States to joint the initiative recently launched to achieve the goal of full early warning system coverage in the next five years, Mr. Guterres said that this would help to reach coastal communities and those whose livelihoods depend on early warning protection measures at sea.

Lastly, Mr. Guterres underlined the need for more science and innovation to propel us into what he called a “new chapter of global ocean action”.

“I invite all to join the goal of mapping 80 per cent of the seabed by 2030. I encourage the private sector to join partnerships that support ocean research and sustainable management. And I urge governments to raise their level of ambition for the recovery of ocean health”.

Concluding with a Swahili proverb: “Bahari itatufikisha popote”, which means “the ocean leads us anywhere”, Mr. Guterres called on all people to pledge on ocean action.

Turn to the Ocean

Addressing the audience in Lisbon, President of the UN General Assembly, Abdulla Shahid, said that the ocean connects us all, and that the Conference would be the place to demonstrate the global commitments.

As a Maldivian, the President said, “I am a child of the Ocean (…) but beyond those of us who look to the blue horizon each day, the entirety of humanity relies upon the ocean for half of the oxygen we take. That’s why we are here this week, to stand for a resource that has carried us through our entire existence”.

The declaration entitled “Our ocean, our future: call for action” is expected to be adopted on Friday.

“We expect to leave Lisbon with a clear understanding of financing options and pathways. The Ocean is the most underappreciated resource in our planet,” said President Kenyatta, stressing that youth need to be in the front row seat of the discussion, and that they were a part of the solution.

Addressing the plenary, President Rebelo de Sousa said that Lisbon was the right place for the Ocean Conference because the ocean had been essential in transforming Portugal to what it was today.

Movie star and ocean activist Jason Momoa was designated the UN Environment Programme’s (UNEP) Advocate for Life Below Water on Monday, at the UN Ocean Conference on Monday.

The Aquaman actor, who has worked with Sustainable Coastlines Hawaii and rePurpose Global, described how humbled he felt to be entrusted with the responsibility to promote ocean health: “With this designation, I hope to continue my own journey to protect and conserve the ocean and all living things on our beautiful blue planet, for our generation and the generations to come.”

Mr. Momoa made remarks ahead of the Youth and Innovation Forum, where he received the “Nature Baton” from the UN Special Envoy for the Ocean, Peter Thomson. The Aquaman star then handed the baton to youth representatives before they, in turn, passed it to the UN Secretary-General.

During the week, UN News will bring you daily coverage on the Conference as well as interviews, podcasts and features, which you can access here. 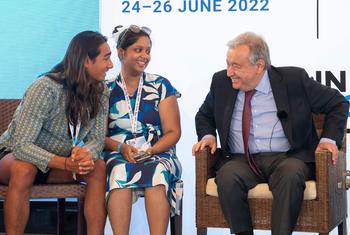 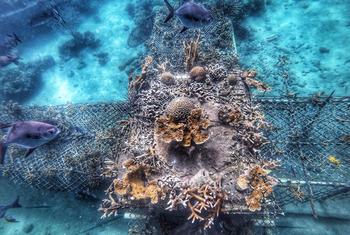 The marine treasures of Colombia are often overlooked, as the country is known more for its mountains and the colourful towns that dot its coffee region. But just below the waves, a vibrant undersea world with over a thousand square kilometres of coral reef awaits those who take the plunge.