With the livelihoods of about 40 per cent of the world’s population living at or near a coast, the second day of the UN Ocean Conference under way in Lisbon focused on strengthening sustainable ocean-based economies, managing coastal ecosystems.

The world’s coastal populations contribute significantly to the global economy – an estimated $1.5 trillion per year – with expectations pointing to some $3 trillion by 2030.

She is life.Our future.Our responsibility.She is our ocean.And we have the power to save her.But we must #ActNow. #SaveOurOceanhttps://t.co/QtPJbVXpcf pic.twitter.com/unNg10ArhP

This is particularly important to small island developing states (SIDS), for whom marine resources are critical assets, providing them with food security, nutrition, employment, foreign exchange, and recreation.

Further, through evidence-based policy interventions, these assets can also make enhanced and sustained contributions to the economic growth, and prosperity of SIDS and least developed countries (LDCs).

Participating in the main interactive dialogue of the second-day of the Conference, former President of Seychelles, Danny Faure, explained to UN News that it is “extremely important that small States have a place at the table, to ensure that they can put forward their aspirations and move in the right direction”.

Acknowledging that climate change continues to affect his own country, and several SIDS, Mr. Faure called on the international community to continue to support countries like Seychelles.

“The blue economy is essential for the livelihoods of our people and nations. I see [investment] coming very slowly and I believe it is very important that, internationally, we continue to maintain the focus, so we can build partnerships between civil society and private sector,” he stated.

© FAO/Luis Tato
Fish is sun dried at a landing site in Kigoma, Tanzania.

What does a truly sustainable blue economy mean?

Despite of the lack of a universally accepted definition of the term blue economy, the World Bank defines it as “the sustainable use of ocean resources for economic growth, improved livelihoods, and jobs while preserving the health of the ocean ecosystem.

A blue economy prioritizes all three pillars of sustainability: environmental, economic, and social. When talking about sustainable development, it is important to understand the difference between a blue economy and an ocean economy. The term implies that the initiative is environmentally sustainable, inclusive and climate resilient.

© Unsplash
Seagrass, which evolved over 70 million years ago from terrestrial grass, is one of the most diverse and valuable marine ecosystems on the planet.

Small island developing states control 30 per cent of all oceans and seas. But how can SIDS and the private sector build equitable and accountable partnerships for sustainable ocean?

Calling for the implementation of the promises set out in the SIDS Accelerated Modalities of Action, known by the shorthand SAMOA Pathway and the ambitions of Sustainable Development Goal 14 (SDG14), on conservation and sustainable use of the oceans, experts on the second day of the Conference reiterated the importance of harnessing private sector collaboration to make it possible.

Speaking to UN News, the Secretary to Government of Tuvalu, Tapugao Falefou, said that his country was “not just beginning to understand what climate change is and how impacts [the world] but also physically understanding how it impacts [us].”

Describing major coastal erosion, drought and inland inundated by seawater, Mr. Falefou said “that didn’t happen 20 years back. These are the impacts of climate change that I can attest to, that larger countries may not experience.”

The path of multilateralism

With millions employed worldwide in fishing and fish farming, most in developing countries, healthy and resilient marine and coastal ecosystems are fundamental to sustainable development.

Other sectors that are critical to the resilience of developing countries include the coastal tourism sector, which contributes up to 40 per cent or more of the global gross domestic product (GDP) in some SIDS, and the marine fisheries sector, which provides nearly 20 per cent of the average intake of animal protein consumed by 3.2 billion people, and more than 50 per cent of the average intake in some least developed countries.

Ngozi Okonjo-Iweala, World Trade Organization (WTO) Director-General, added that without multilateralism, no one can solve the problem of the Ocean.

“SIDS have the potential to be large ocean economies (…) if we do so sustainably, we can unlock development prospects”, she added, emphasizing the blue economy path.

© FAO/Sylvain Cherkaoui
A fisherwoman on her way to sell the fish she caught at Joal port in Senegal.

Women and the ocean

Focusing on the interlinkage between the SDG14 and SDG 5 (gender equality and the empowerment of women and girls) a panel of experts advocated for increasing women’s participation and leadership at all levels.

With women critically under-represented in the field of ocean actions, particularly in decision-making roles in ocean science, policy-making, and blue economy, the panel called for more action and a radical change in society.

“We have an enormous responsibility to do whatever we can to ensure the sustainability of our planet, and an event like this [Conference] is probably one of the most important in terms of the future of life,” said Cleopatra Doumbia-Henry, President of the World Maritime University, based in Sweden.

Reiterating the importance of looking into women’s working conditions and pay-gap in fisheries, Ms. Doumbia-Henry added: “We need to focus on some of these questions, and what I am tired of is the lip service, we need to make the changes, and implement, to take it forward.”

For Maria Damanaki, founder of Leading Women for the Ocean, concrete action plan is needed, along with legislation.

“We need to see women as part of the blue economy, we need to see them everywhere, to mainstream their participation, because without their leadership, humanity as a whole is going to lose a lot,” Ms. Damanaki said.

With the expected participation of over 12 thousand ocean advocates, including world leaders, entrepreneurs, youth, influencers, and scientists, the Conference will continue to ignite fresh impetus for advancing SDG14, at the heart of global action to protect life under water. Concrete measures will be adopted to build ocean resilience and more sustainable communities, underpinned by a new wave of commitments to restore the ocean’s health.

During the week, UN News will bring you daily coverage on the Conference as well as interviews, podcasts, and features, which you can access here. 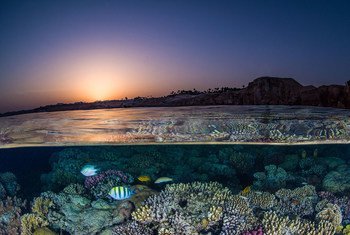 The world’s best-known coral reefs could be extinct by the end of the century unless we do more to make them resilient to our warming oceans. 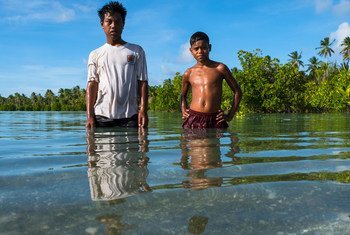 Small island nations across the world are bearing the brunt of the climate crisis, and their problems have been accentuated by the COVID-19 pandemic, which has severely affected their economies, and their capacity to protect themselves from possible extinction. We take a look at some of the many challenges they face, and how they could be overcome.