Amin Awad was appointed the UN Crisis Coordinator in Ukraine by Secretary-General António Guterres in February, following the Russian attack on the country. Marking 100 days since the 24 February Russian invasion of Ukraine, UN News spoke exclusively and in depth to Mr. Awad, who explained what the UN is doing to try to end the conflict, and provide support and protection to millions of Ukrainian civilians caught in the crossfire, especially in light of the bitterly cold winter, which lies just a few months ahead.

UN News: The Russian war in Ukraine has reached a tragic milestone. Are there any hopes that this war will end anytime soon?

Amin Awad: “There is optimism that the war will end, because neither Ukraine nor Russia can afford it. Ukraine is suffering from the loss of life, the destruction of hospitals, schools, homes, railway stations and tracks, and the transport sector. And the sanctions on Russia are severe.

It is also destructive for the world. Ukraine supports about 15 to 20 per cent of the world’s food needs. This food is trapped, and we have another harvest season coming up: we have an impeding disruption of food pipelines and supply chains.

We’re also seeing inflationary problems and countries defaulting on their debt: Sri Lanka, for example, is unable to pay its loans. The world is not in a good place.

UNOCHA/Ivane Bochorishvili
Aid workers prepare to deliver the much-needed assistance from the UN and humanitarian partners in Sievierodonetsk, Ukraine.

UN News: Civilians are paying the highest price for this invasion. Many were killed, while millions have sought refuge in neighboring countries. What is the situation like for those who are still in the country?

Amin Awad: There is a sense of despair. There are almost eight million people displaced internally, and another six million abroad. Around 15 million did not leave their homes, but they're impacted by the loss of their livelihoods, and have lost access to services like education, health, and other amenities. Millions of children are not going to school.

The social security system is strained. Government services are stretched. So is the humanitarian community. It's a really bad situation.

UN News: The UN and Red Cross (ICRC) facilitated the evacuation of desperate civilians trapped in the Azovstal steel plant in the Ukrainian port city of Mariupol. Are there any similar operations the UN is involved in right now, to evacuate those who are trapped in the hostile zones?

Amin Awad: We haven't received requests for evacuations, such as the one in Mariupol, but we have been putting requests forward for access to areas where populations are in need of food, medical supplies, and other kind of support.

Moreover, I think now we have to really concentrate on winter: we are already in June, and winter is around the corner and, in this part of the world, temperatures are sub-zero. With the destruction of many of the power energy plants, and the loss of alternative energy supplies, we need to quickly come up with a strategy to support millions of people during this winter.

UN News: You have been in Ukraine for a while now, and you’ve seen the ugly face of this war. Can you tell us a human story that touched you deeply?

Amin Awad: There's a lot of suffering. Driving through some of these areas of destruction, I see children who have escaped the destruction of their homes or apartment building, and find themselves alone on the road, with no parents, no guardians, and nowhere to go.

There's a lot of suffering. Driving through some of these areas of destruction, I see children who have escaped the destruction of their homes or apartment building, and find themselves alone on the road, with no parents, no guardians, and nowhere to go.

I think this is one of the ugly faces of war that we have to stop.

UN News: Regarding the safety of the Zaporizhzhya Nuclear Power Plant, is the UN working with parties to address any possible threats?

Amin Awad: The International Agency for Atomic Energy (IAEA) has been here many times. They went to all the plants. Zaporizhzhya is under Russian control, and I believe that there's a negotiation underway to provide access to the agency.

Nuclear plants could pose a danger, not only to Ukraine, but to the whole continent. So, they need the utmost attention, and security procedures and protocol have to be followed.

UN News: There were many attacks on schools across Ukraine. You’ve been calling on warring parties to spare civilians and civilian infrastructure and you stressed that these obligations under international humanitarian law are non-negotiable. Are there any signs that Russia is listening to these calls?

Amin Awad: We continue to call on Russia to really spare what we call civilian infrastructure, which is sources of water, electricity, schools and hospitals.

We will continue to make these calls, because the number of people who fled because of these attacks is huge and unacceptable.

© UNICEF/Ashley Gilbertson VII Photo
The principal of a school in Chernihiv, Ukraine, surveys the damage caused during an aerial bombardment.

UN News: Do you have any final message?

Amin Awad: My final message is really for this war to stop. The world will gain a lot.

Around 69 countries could be affected by food shortages, inflation, the collapse of supply chain, the impact of unemployment, and many other elements.

The world is already facing many challenges. One of them is climate change, which is also affecting agriculture and other livelihood sources.

So, any way you look at it – strategically, politically, or economically – wars are evil.

There are no gains in any war. Everybody loses.”

The text of this interview has been edited for clarity and length. Listen to the full audio interview below: 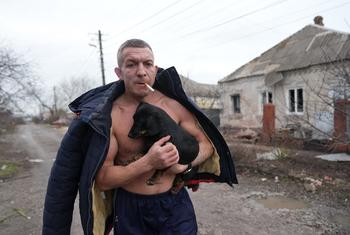 The UN’s crisis coordinator in Ukraine called on Sunday for an immediate stop to fighting in besieged Mariupol to allow trapped civilians to leave the city safely. 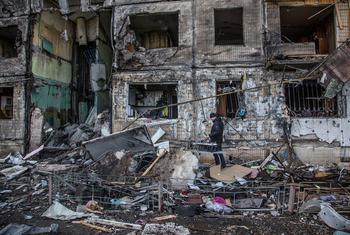