© UNICEF/Evgeniy Maloletka
A man holds a dog as he walks past a damaged house following shelling in Mariupol, in southeastern Ukraine.

The UN’s crisis coordinator in Ukraine called on Sunday for an immediate stop to fighting in besieged Mariupol to allow trapped civilians to leave the city safely.

“The lives of tens of thousands including women, children, and older people, are at stake in Mariupol,” said Amin Awad in a statement. “We need a pause in fighting right now to save lives. The longer we wait the more lives will be at risk. They must be allowed to safely evacuate now, today. Tomorrow could be too late”.

Almost a week ago, the UN Secretary-General António Guterres had called for a humanitarian pause in hostilities as Orthodox Christians celebrate Holy Week.

On Easter Day, Awad reiterated the UN chief´s appeal for a halt to fighting to allow life-saving supplies into Mariupol and other areas under attack and enable the departure of those wanting to leave amid reports of the situation in Mariupol deteriorating dramatically.

“At a time of a rare calendar alignment of the religious holidays of Orthodox Easter, Passover and Ramadan, it is the time to focus on our common humanity, setting divisions aside,” he said.

© UNICEF/Evgeniy Maloletka
A woman looks at her damaged house after shelling in Mariupol, in southeastern Ukraine.

According to UN agencies, the humanitarian situation in Ukraine continues to deteriorate, as a result of ongoing hostilities chiefly taking place in eastern and southern oblasts.

Over a quarter of Ukraine’s population is currently displaced internally or in neighbouring countries.

The World Food Programme (WFP) has warned that over one-quarter of internally displaced families with children under the age of five has reported difficulties in feeding their children since the start of the conflict.

As hostilities intensify, the basic needs of people stranded in hard-to-reach areas increase, while also hampering efforts to establish humanitarian corridors to both evacuate civilians and deliver life-saving assistance.

The most urgent and critical needs are in these locations with high levels of insecurity, disrupted food supply and retail capacities, and limited or sporadic humanitarian access, such as Mariupol. 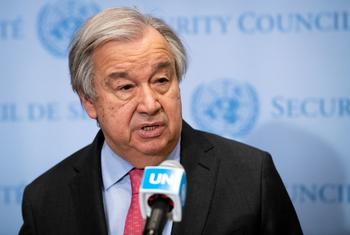 António Guterres will be traveling to Russia and Ukraine to meet with both the Foreign Ministers and Presidents of these countries. 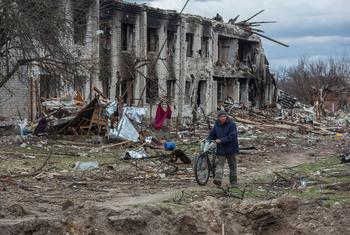 UN rights chief Michelle Bachelet on Friday condemned the “horrors” committed against civilians in Ukraine as the World Health Organization (WHO) warned that it feared the worst in devastated areas of the country's east and south.