Colombia’s dynamic peace process – which saw fresh strides with the holding of a largely peaceful parliamentary election last month – will succeed or fail based on efforts to halt the deadly violence faced by former combatants, social leaders and human rights defenders, the senior UN official in the country told the Security Council on Tuesday.

Carlos Ruiz Massieu, the Secretary-General’s Special Representative and Head of the UN Verification Mission in Colombia, said armed groups in some parts of the country are targeting the very communities who were most victimized during the half-century-long civil war, which officially ended with the signing of a historic Final Peace Agreement in 2016.

"#Colombia’s democracy will no doubt be enriched by the increased voice of victims in Congress," @CGRuizMassieu said at the Council today, referring to 16 new electoral districts established under the Peace Agreement, in conflict-affected regions. Watch: https://t.co/fDKtmOwCgy pic.twitter.com/FmtffTC2Xf

“Violence is also exacting a particularly high toll on indigenous and Afro-Colombian communities in the form of killings, displacements and the increasing recruitment of minors,” he said.

Mr. Massieu briefed the Council on the results of the recently concluded election, noting that Presidential elections are set to follow in May.

“For the second time since the signing of the [2016 Peace Agreement], elections were mostly free of violence,” he said, adding that the successful laydown of arms by members of the now-defunct FARC-EP militia group – verified by the UN – significantly reduced the chance of clashes.

The election featured, for the first time, the opportunity for Colombians to elect representatives of 16 new electoral districts established under the Peace Agreement, in conflict-affected regions.

In addition, the recent vote saw a notable increase in the number of women candidates and women elected to Congress.

“The current electoral cycle helps illustrate some of the dividends of peace,” said the Special Representative.

A major component of Colombia’s peace process remains the social reintegration of former FARC-EP members, as well as former combatants from other armed groups, who have agreed to lay down their arms in return for State protection.

Today, more than 13,000 accredited former fighters – including almost two-thirds of all former FARC-EP members – are reintegrating, and remain engaged with the peace process.

However, the lingering violence spotlighted by the Special Representative continues to jeopardize former combatants’ plans to build a new life.

Against that backdrop, Mr. Massieu stressed the responsibility of the Colombian Government to fully implement the security guarantees laid out in the 2016 Agreement.

He added that those provisions will have the added benefits of boosting political participation and transitional justice, and are closely linked to rural reform efforts and the success of voluntary crop substitution programmes.

The Special Representative also updated the Council on the historic first hearings of “acknowledgement of responsibility” sessions, to be held by the Government’s Special Jurisdiction for Peace, in the coming weeks.

In those hearings, former FARC-EP commanders, members of the public security forces and civilian third parties, will have a platform to demonstrate their commitment to the truth and the rights of victims.

The process is an important part of Colombia’s restorative justice initiative, which is being led by the Special Jurisdiction for Peace.

Meanwhile, in another important development, Colombia’s Truth Commission – established under the Peace Agreement to collect and analyse the testimonies of thousands of victims who suffered violence during the 50-year long civil conflict – is poised to release its final report in June.

Urging Colombia to “make wise use” of the report, Mr. Massieu said the UN stands ready to support the Commission in its crucial work of disseminating that text.

Describing Colombia’s peace as invaluable – as well as a poignant example of a successful peace process “in a world of geopolitical divisions, endless wars and the multiplying of conflicts” – the Special Representative urged the Council to continue to support the Government in protecting it.

While the baton will soon be passed to a new administration, he expressed his hope that Colombia’s future leaders will continue to assume the responsibility of implementing the Peace Agreement.

“Colombia reminds the world that even an armed conflict of more than five decades, with a painful toll of millions of victims can be resolved through dialogue, laying the foundations for reconciliation and non-repetition.” 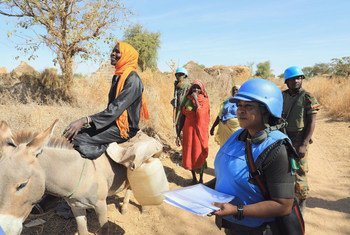 The UN chief has called for $100 million each year in assessed contributions from Member States, to fund the world body’s peacebuilding activities, describing such an investment as “a bargain” compared with the punitive costs of war.