The UN chief has called for $100 million each year in assessed contributions from Member States, to fund the world body’s peacebuilding activities, describing such an investment as “a bargain” compared with the punitive costs of war.

Secretary-General António Guterres was briefing the Peacebuilding Commission on Wednesday on his latest report on peacebuilding and sustainable peace.

“When we consider the costs of war — to the global economy but most of all to humanity’s very soul — peacebuilding is a bargain, and a prerequisite for development and a better future for all,” he told the Commission – an intergovernmental advisory body that supports peace efforts in countries emerging from conflict.

"Peacebuilding works — it is a proven investment."The Secretary-General's report on Peacebuilding and Sustaining Peace is a call to ensure that our peacebuilding architecture is fit-for-purpose in this rapidly changing environment.Find out more here 👇https://t.co/OG3PXRkOiv pic.twitter.com/16fvQoeKbD

Mr. Guterres said that the Commission’s task grows larger by the day, citing the highest number of violent conflicts since 1945, including Yemen, Syria, Myanmar, Sudan, Haiti, the Sahel and now Ukraine.

Two billion people, or one quarter of humanity, lives in conflict-affected areas, he noted, pointing out that the poorest and most vulnerable pay the highest price.

The report under discussion is a call to ensure that the UN peacebuilding architecture is fit-for-purpose in this rapidly changing environment. This appeal is in line with his proposed New Agenda for Peace that places prevention and peacebuilding at the heart of UN efforts.

“Peacebuilding works - it is a proven investment,” he emphasized, citing several examples of success contained in his report, including in Côte d’Ivoire, Iraq, the northern countries of Central America, the Great Lakes region, Papua New Guinea, Colombia and the Central African Republic.

He, however, pointed out that a critical funding gap exists.  While the Peacebuilding Fund has been steadily growing - investing $195 million last year, it remains wholly dependent on voluntary contributions from a small number of donors.

Therefore, he said, he was putting forward a proposal to the Fifth Committee – a General Assembly organ to review budgetary matters – for an annual $100 million in assessed contributions for the Peacebuilding Fund, to secure the predictable and sustainable base to deliver results over the long-term.

Over the last decade, the world has spent $349 billion on peacekeeping, humanitarian relief and refugee support, with global military expenditures rising to nearly $2 trillion in 2020. “But let’s not forget that war’s greatest cost is its human toll,” he emphasized.

The General Assembly is scheduled to convene a high-level meeting on financing for peacebuilding on 27 April. 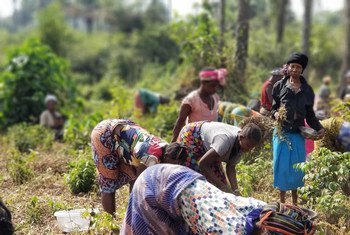 Against the backdrop of a COVID-19 crisis that has exacerbated pre-pandemic challenges and a global ceasefire appeal to combat it, the UN chief called for new peacebuilding funds on Tuesday, promising a “renewed approach to multilateralism and international cooperation”.