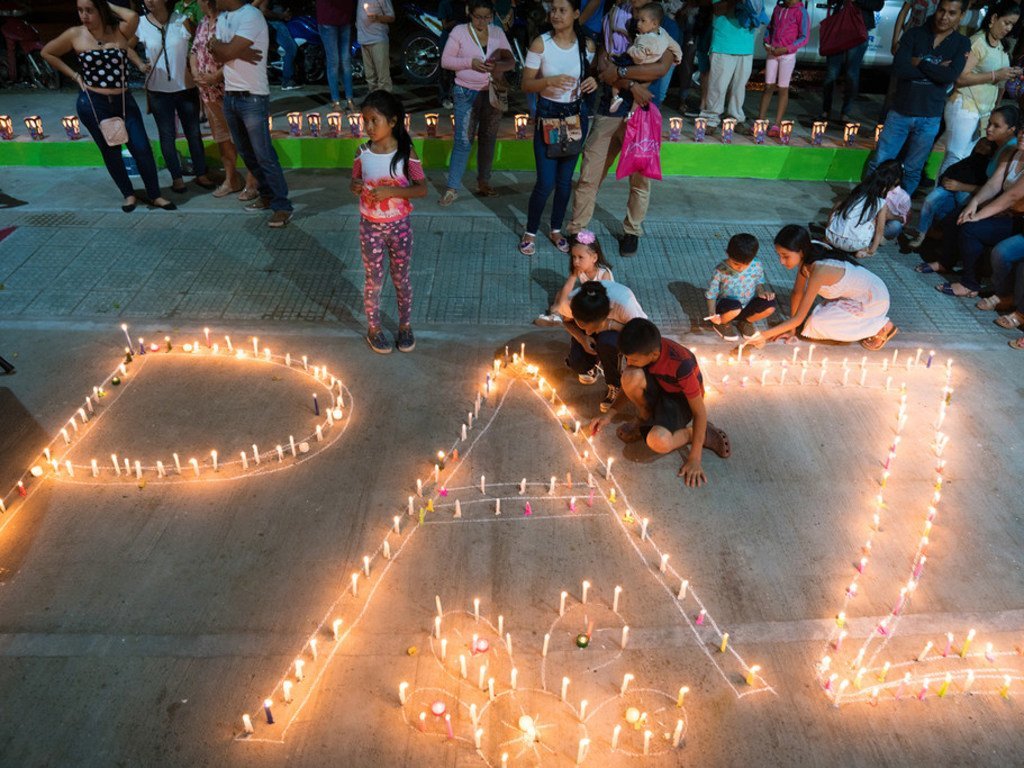 The briefing from Carlos Ruiz Massieu took place less than a week after a car bombing outside the National Police Academy in the capital Bogotá, which left 21 dead and injured dozens. The attack was claimed by the National Liberation Army (the ELN), one of the remaining active armed opposition groups in Colombia.

In total, more than 220,000 people were killed during the long-running conflict beginning in 1964, between Government security forces, and various armed opposition groups, chiefly the Revolutionary Armed Forces of Colombia guerilla movement, or FARC, and drug traffickers.

“In the swift rejection of the attack from across the political spectrum in Colombia, and in the marches held around the country this past Sunday, Colombians demonstrated their ever-broader consensus around the rejection of violence,” said Mr. Ruiz Massieu, who was appointed on 7 January to head the UN’s mission in the country mandated with verifying the implementation of the November 2016 peace agreement. “This consensus must continue to be nurtured,” he told the Security Council.

Special Representative Ruiz Massieu went on to highlight some of the recent major achievements of the peace process, including the fact that the Government’s High-level Forum on Gender – responsible for implementation of the gender provisions of the peace agreement – met for the first time on 16 January.

He also noted “an important milestone” with the inauguration in May 2018 of the ‘Truth Commission’, a body created to examine past human rights violations, including sexual violence, and to foster reconciliation over the next three years.

Mr. Ruiz Massieu stressed that the Special Jurisdiction for Peace – the transitional body in charge of deciding responsiblity for crimes committed during the armed conflict and which started working a year ago – is currently examining five cases of “violent actions impacting no less than 32,000 victims”.

“As this Council has itself insisted, it remains vitally important that the independence and autonomy of the Special Jurisdiction are respected and that it receives the support required to operate effectively,” stated the Special Representative.

Among the near-term challenges ahead, Mr. Ruiz Massieu cited the gaps remaining for the economic reintegration of former combatants, including members of the FARC. He said the various meetings he held in the field have “confirmed both the strong desire of former combatants to work and to find their place in society, as well as the uncertainty many still feel regarding their security, including their legal security, and economic future”.

The 26 December 2018 quarterly report prepared by the UN verification mission for the UN Secretary-General, notes that efforts must be accelerated “to advance on the acquisition of land and to work on the development of markets for goods and services produced.”

In another step forward for full political integration and reform, on 27 October the FARC party, now a democratic force, will take part for the first time in regional and local elections. Representative Ruiz Massieu noted that efforts are being made to guarantee their and every other party’s security and protection.

In Colombia, the security situation remains fragile, as highlighted in the Secretary-General’s report. According to the UN human rights office (OHCHR), since the signing of the 2016 peace agreement, 163 killings of social leaders and human rights defenders have been verified and a total of 454 deaths reported. In the first week of January alone, seven leaders were killed and a total of 31 attacks reported. FARC members are also regularly the targets of attacks, a major challenge to national reconciliation.

“The security of communities, leaders and FARC members are ultimately tied to the ability of the State to establish an integrated security and civilian presence in conflict-affected areas,” said Mr. Ruiz Massieu, as he welcomed the efforts made by the Colombian Government to address this issue.

“I would like to stress that one of the messages I have heard consistently from Colombians during my first weeks on the ground, is how strongly they both welcome and expect the support and accompaniment of the international community as they seek to overcome the many challenges to consolidating peace,” he concluded. “The continued engagement and support of the Security Council will remain a vital pillar of Colombia’s peace process.”

♦ Receive daily updates directly in your inbox - Subscribe here to a topic.
♦ Download the UN News app for your iOS or Android devices.
Colombia|security council

The reintegration of former members of the Colombian FARC-EP rebel movement, which signed an historic peace deal with the country’s government in 2016, remains a subject of serious concern, said the head of the UN Verification Mission set up to monitor the deal, on Wednesday.