UN Photo/Eskinder Debebe
Carlos Ruiz Massieu, Special Representative of the Secretary-General and Head of the UN Verification Mission in Colombia (UNVMC), briefs the Security Council on the situation in Colombia.

Briefing the Council just days after its members returned from the South American country, Carlos Ruiz Massieu, the Head of the UN Verification Mission in Colombia, said that “as you heard repeatedly during the visit, the Council's steadfast and unified support has been critical to these achievements, and the Colombian people and institutions are deeply grateful to the Security Council.”

A historic 2016 peace deal between the Colombian Government and Revolutionary Armed Forces (FARC) guerrillas brought the western hemisphere's longest-running conflict to an end.

Yet Mr. Ruiz Massieu pointed out that that as the Council had been able to observe on the ground, assessment of the peace process was “mixed”. While efforts by the Government to advance the reintegration of former FARC-EP members had begun showing concrete results, security in conflict affected areas remains of grave concern.

He said that security remains extremely worrying in Colombia’s former conflict zones. Three weeks ago, four FARC-EP veterans were killed, bringing to 127 the number of FARC-EP members killed since the peace deal was signed. The UN was also concerned about the situation of social leaders and human rights defenders, he said, adding: “The plight of hundreds of brave leaders under threat around the country is unacceptable.”

UN Photo/Juan Manuel Barrero Bue
Pictured at second from left is Gustavo Meza-Cuadra Velásquez, Permanent Representative of Peru, and President of the Security Council for the month of July, during the Council's visit to Colombia. At second from right is Marc Pecsteen de Buytswerve, Per

Further, proper attention must also be paid to the approximately 8,000 former combatants living outside the Territorial Areas, including in new settlements and urban areas.

“All actors involved in supporting the reintegration process must recognize this changing landscape and adapt strategies accordingly with a view to provide these former combatants with reintegration options and with security guarantees, Mr. Ruiz Massieu stressed.

Even against this backdrop, he underscored the majority of former FARC-EP members, as well as party leaders, remain firmly committed to the peace process. “This commitment is reflected in their participation in the Congress, in their preparations for future elections and in their efforts to reintegrate into civilian life and build a better future for their families and communities," he said.

Citing an example of what has been accomplished through the perseverance of former combatants, he said that just last week, products of FARC-led cooperatives were on display at Colombia's largest agricultural fair in Bogata, including coffee, beef products, and handicrafts.

Mr. Ruiz Massieu told the Council that no effort should be spared to ensure that the local elections in October are as peaceful as the presidential and legislative elections of last year. The polls, he added, are another important step in the political reintegration of the FARC.

Concluding his briefing, he said the Peace Agreement has saved thousands of lives, but also created opportunities for victims and their families to seek redress and justice, and economic development for vast Extents of Colombia that have been ravaged by the war for decades.

Continued support for a unified Security Council would be crucial to ensuring a sustainable peace for Colombia, he said.

Colombia: Criminal elements use violence and intimidation to ‘stamp out’ leaders’ voices 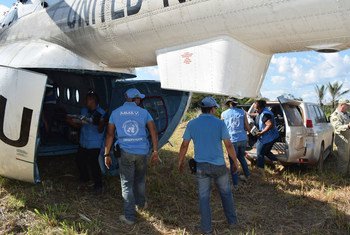