YPN for UNOCHA
A family in the Al Dhale'e camp for people displaced by the conflict in Yemen.

The Secretary-General on Monday welcomed consultations due to begin next week, on a political declaration to protect civilians living in cities and towns who come under fire from heavy bombing and shelling.

The loss of life and devastation caused by the use of explosive weapons in populated areas (EWIPA) has long been evident, and it’s an issue that António Guterres has been concerned about for over a decade, having repeatedly called on warring parties to avoid their use.

When used in populated areas, #explosiveweapons destroy towns &amp; cities, ruining lives and livelihoods – even after fighting has stopped.@UN Secretary-General @antonioguterres encourages States to commit to avoiding the use of #EWIPA 👉 https://t.co/OtATfwmpJE pic.twitter.com/qiiX1g37PS

Airstrikes on civilian facilities in Saudi Arabia and Yemen topped by ongoing attacks against Ukraine, where millions are living in constant fear of indiscriminate shelling, are just the most recent examples of the scourge.

“When explosive weapons are used in populated areas, 90 per cent of the casualties are civilians, resulting in lasting trauma endured by millions of girls, boys, women and men,” said a statement issued on behalf of the UN chief, noting that informal consultations for an EWIPA treaty will take place in Geneva from 6 to 8 April.

EWIPA create a consistent pattern of harm to civilians, destroying lives, livelihoods, and vital infrastructure such as healthcare facilities – with civilians accounting for nine out of 10 casualties.

“Populated areas across regions have endured devastating suffering from a hail of explosive weapons with wide area effects,” the statement continued.

It notes that “certain types” of heavy weaponry were originally designed for traditional, open battlefields, which when used in populated areas “inflict massive and often indiscriminate destruction impacting civilians and civilian objects, including health facilities, schools, water and sanitation facilities, energy and other critical infrastructure, and the environment”.

The damage and destruction of “civilian objects and critical infrastructure” reverberate for a long time after the fighting has stopped, for those civilians who survive bombardment and siege conditions.

Devastating effects include the long-term loss of access to education, health services, water, communications and livelihoods – infringing on the “economic, social and cultural rights of the affected population.”

Moreover, these disruptive effects represent a main driver of mass displacement, both within States and across borders, while also hampering the voluntary, safe, dignified and sustainable return of displaced communities to their places of origin.

“Furthermore, the use of these weapons in populated areas often results in high levels of explosive ordnance contamination, which obstructs stabilization and reconstruction efforts long after hostilities have ceased. Removal through mine action activities is also complex, costly and dangerous,” the statement continues.

The top UN official welcomed the work undertaken so far to develop a political declaration that “addresses the humanitarian as well as associated human rights impact” arising from EWIPA.

He also called for “a strong text” that includes an express commitment to avoid in populated spaces explosive weapons with wide area effects, “because of the significant and foreseeable likelihood of their indiscriminate effects.”

“The Secretary-General supports the development of a political declaration, as well as appropriate limitations, common standards and operational policies in conformity with, and further to existing requirements under, international humanitarian law relating to the use of explosive weapons in populated areas,” the statement concluded.

Secretary-General's statement on consultations for a political declaration to m… 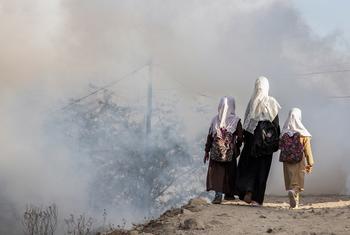 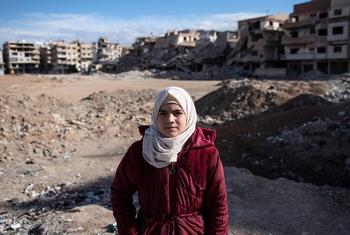