© UNICEF/Kristina Pashkina
Two 14-year-olds play on the swings at their former school in Kharkiv, northeast Ukraine, after it was destroyed by shelling.

A UN-partnered bid to address the use of explosive weapons in towns and cities took a further step forward on Thursday, as Member States prepared to gather in Geneva to examine a concrete new plan of action.

The development has been driven by the recognition that civilians are at increased risk from armed conflicts that have become more protracted, complex and urbanised.

The weapons that continue to be used in urban settings are totally unsuited to heavily built-up areas, a fact highlighted by the UN Secretary-General’s annual report on the protection of civilians, which first urged combatants not to use explosive weapons in such settings in 2009, said Dominique Gassauer, Humanitarian Affairs Officer, Office for the Coordination of Humanitarian Affairs (OCHA).

“Today, some 50 million people are estimated to be living in situations of urban conflict or at the threat of urban conflict and are exposed to the acute risks and dangers posed by these weapons,” she said. “So, the political declaration tomorrow that will be presented by Ireland that has been stewarding this process for the last three years, is going to be a key step, to step up the protection of civilians.”

Last year, more than 1,200 incidents involving the use of explosive weapons in populated areas were recorded in 21 States affected by conflict, causing death or injury of over 10,000 people, the OCHA official noted. Nearly 90 per cent of the victims were civilians, underscoring the need for updated international norms on the use of these weapons.

“This may surprise you to hear this, but even in populated areas, explosive weapons with wide area effects can be used in accordance with international humanitarian law, but …this is extremely difficult to achieve,” said Eirini Giorgou, Legal Advisor, International Committee of the Red Cross (ICRC).

She added: “This political declaration establishes a framework for further work among States and it signals there is political will, there is determination to take action to address this problem that States recognise as an urgent concern and the need to better protect civilians.”

Echoing that message, civil society actor the International Network on Explosive Weapons (INEW) noted that there was particular concern about weapon systems “that impact a wide area: heavy aircraft bombs, rockets, missiles, artillery; these are heavy weapons that are often inaccurate, outdated and were designed for use in open battlefields,” said Laura Boillot, INEW Coordinator. “They are wholly inappropriate for use in towns and cities.”

Over the past decade there have been incidents involving explosive weapons in urban settings in 123 different countries, “so this is really a very widespread and severe problem”, Ms. Boillot said.

She added that the issue of explosive weapons destruction had been “highly contested” by many unnamed States, before recalling that for over 100 years, explosive weapons had been the “weapons of choice”, not least in carpet-bombing cities during World War II.

But mindsets changed on the use of such destructive weapons after that conflict, Ms. Boillot noted, adding that international pressure for new limits of the use of explosive weapons in populated areas were signalled in international meetings in Maputo in 2017 and in Santiago in 2018.

The “Political Declaration on Strengthening the Protection of Civilians from the Humanitarian Consequences arising from the use of Explosive Weapons in Populated Areas” is to be presented to Member States at the UN in Geneva, on Friday.

About 60 delegations are expected to take part in the consultations ahead of a formal signing ceremony later in the year.

If the Final Declaration text is adopted as it stands, it is expected that the UN, the ICRC and civil society will be involved in putting it into effect, said Ms. Giorgou. 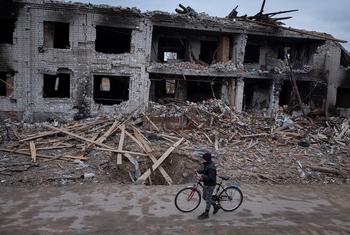 On average, 90 per cent of those killed and injured by the use of explosive weapons used in populated areas are civilians. A political commitment to address the humanitarian harm arising from the use of these weapons in cities, towns and villages could be a major step towards protecting those caught up in conflict. 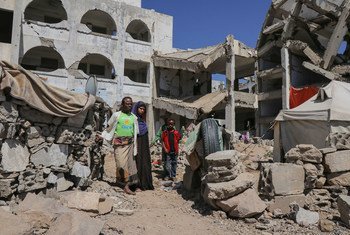 The Secretary-General on Monday welcomed consultations due to begin next week, on a political declaration to protect civilians living in cities and towns who come under fire from heavy bombing and shelling.