The United Nation’s General Assembly adopted on Thursday, by consensus, a resolution that condemns denial and distortion of the Holocaust.

The resolution was approved in the presence of a group of people who survived the Nazi genocide that killed around six million Jews, some two-thirds of the Jewish population of Europe, during World War Two.

The vote comes on the same day, 80 years ago, during the Wansee Conference, when top Nazi officials discussed and coordinated the genocide of the Jewish people, establishing the system of Nazi death camps.

Today prior to convening the 55th plenary of the #UNGA, I had the opportunity to meet with a few #holocaust survivors along with the Permanent Representative of @IsraelinUN Ambassador @giladerdan1 and the CEO of @pfizer Mr. Albert Bourla, whose parents survived the Holocaust. pic.twitter.com/8xegfptY2N

Introducing the resolution, Israel’s ambassador to the United Nations, himself a grandson of Holocaust victims, Gilad Erdan, said the world lives “in an era in which fiction is now becoming fact, and the Holocaust is becoming a distant memory.”

“Holocaust denial has spread like a cancer, it has spread under our watch”,he warned.

According to the resolution, this genocide “will forever be a warning to all people of the dangers of hatred, bigotry, racism and prejudice.”

In the text, Member States express concern about “the growing prevalence of Holocaust denial or distortion through the use of information and communications technologies.”

It also urges all Member States to “reject without any reservation any denial or distortion of the Holocaust as a historical event, either in full or in part, or any activities to this end.”

The resolution commends countries that have “actively engaged in preserving those sites that served as Nazi death camps, concentration camps, forced labour camps, killing sites and prisons during the Holocaust, as well as similar places operated by Nazi-allied regimes, their accomplices or auxiliaries.”

At the United Nations, most educational efforts to combat antisemitism happen through the Educational, Scientific and Cultural Organization (UNESCO).

The agency activities include the training of teachers, developing policy guidelines for Ministries of education around the world as well as activities to address and prevent contemporary antisemitism, including online.

Last year, the agency and the World Jewish Congress signed an agreement with Facebook to redirect users searching for terms related to the Holocaust or Holocaust denial to a joint website that is available in 19 languages.

Following the adoption of the resolution, the agency vowed to “continue to teach history and combat all forms of antisemitism, online and offline.”

Also on Thursday, the UN High Commissioner on Human Rights spoke to the Italian Senate's Extraordinary Commission against intolerance, racism, antisemitism and incitement to hatred and violence.

In her speech, Michelle Bachelet recommended specific reforms to build policies and narratives that emphasise our common humanity and rights.

She also said that antisemitism and anti-Muslim prejudice appear to be growing across Europe, highlighting a survey by the Fundamental Rights Agency’s showing that 89% of respondents felt that antisemitism had increased in their country.

According to Ms. Bachelet, political movements that profit from hatred have gathered strength in many countries.

“By heightening the emotions of their supporters through campaigns of misinformation and disinformation, they gain media attention, and votes – but they also drive deep, violent and profoundly damaging wedges through societies”, she warned.

The High Commissioner told Italian senators that the impact of this kind of hate speech is devastating.

“It exposes them to humiliation, violence, discrimination and exclusion – exacerbating underlying social and economic inequalities, and fuelling deep grievances”, she explained.

The Human Rights chief also remembered a quote from Primo Levi, a renowned Italian writer and Jewish Holocaust survivor, who said: "It happened, so it could happen again". 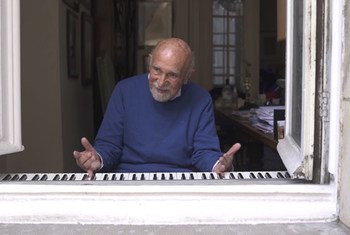 An 89-year-old pianist who escaped the Holocaust in Nazi Germany almost eight decades ago, has been explaining how he started playing jazz in memory of his sister, and has kept going through the COVID-19 lockdown, playing from the window of his Brussels home “to give people courage.” 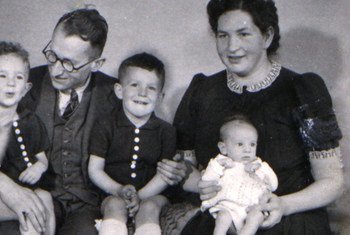 Before Vered Kater became a dedicated health worker, traveling to developing countries to administer aid to the needy, she spent her early years in hiding – from the Nazis.