© Dutch Ministry of Foreign Affairs
Simon Gronowski plays the piano for passers-by from his home in Brussels, Belgium.

An 89-year-old pianist who escaped the Holocaust in Nazi Germany almost eight decades ago, has been explaining how he started playing jazz in memory of his sister, and has kept going through the COVID-19 lockdown, playing from the window of his Brussels home “to give people courage.”

Simon Gronowski spoke to the United Nations ahead of International Jazz Day, which is celebrated annually on 30 April as a force for “peace, unity, dialogue and enhanced cooperation among people”.

© Photo courtesy of Simon Gronowski
Simon Gronowski as a young boy in 1940 with his mother and father walking along Avenue Louise in Brussels, Belgium.

On 17 March 1943, then 11-year-old Simon Gronowski, was taken by the German Nazi regime’s secret police, the Gestapo in Brussels, with his mother Chana and sister, Ita. The young Jewish boy was being deported to the notorious Nazi death camp Auschwitz when, “by a miracle, I jumped from the train and escaped”, he recounts. His mother and sister died in Auschwitz and his father, Leon, left devastated by their deaths, also passed away within months of the end of the war. The young Gronowski was left alone in the world.

Today, nearly 80 years after his escape, Mr. Gronowski, now 89, is a Doctor of Law, with two children and four grandchildren - and a proud jazz pianist.

“After the war, jazz helped me to find stability and integrate in society. Music unites people and brings them some joy”, he told the UN in an interview.

During the COVID-19 pandemic and first lockdown in Belgium, Mr. Gronowski played jazz “to give people courage.” He opened the window from his home in Brussels and started playing the jazz classic ‘On The Sunny Side Of The Street’ from his electric piano for neighbours and passers-by.

“I look up, and I see lots of people in front of my house, and people clapping”, recounts Gronowski, who plays music by ear and takes inspiration from jazz artists such as Louis Armstrong, Ella Fitzgerald and Billie Holiday.

“I feel good when I play. I feel I am bringing happiness to those around me”.

It’s not just passers-by who have been treated to his music lately. To mark the 75th anniversary of the International Court of Justice (ICJ) in the Hague, the Netherlands on 18 April 2021, Mr. Gronowski was invited to participate in a virtual musical event which paid tribute to the work of the Court.

The ceremony was an online premiere of the piece “Hymne des Nations”, written in 1913 by Jewish-Dutch composer Charles Grelinger (1873-1942), who died while being transported to Auschwitz. Apart from a one-off performance on The Hague’s city hall bells, the piece had never been played before.

As a lawyer and survivor of the Holocaust, participating in the ceremony was a “great honour” for him, who commends the important work of the ICJ.

“The International Court of Justice is important not only to me but for all of humanity. It fights against barbarism, fascism, racism, and anti-Semitism, of which I was a victim. Thanks to the Court, we can hope that conflicts between states are resolved not through war, but through law.”

For nearly 60 years, Mr. Gronowski hardly ever spoke of his incredible escape. Today, he has written books and his story even inspired composer Howard Moody, to make the opera PUSH based on his life.

He now continues to tell his tale far and wide, particularly in schools, to bring a message of hope and reconciliation to the next generation.

“To defend today’s freedom and democracy, we have to be aware of yesterday’s evils. Life is beautiful, but it is a permanent battle. I tell young people, ‘never forget, long live peace and friendship between men’.” 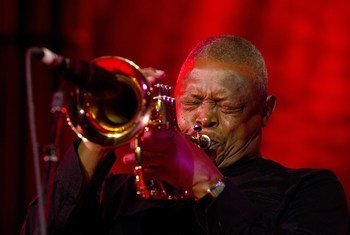 As people worldwide remain in lockdown due to the COVID-19 pandemic, they are being encouraged to invite some of the world’s top musicians into their homes this Thursday, International Jazz Day. 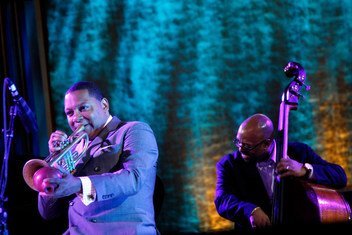 Blues, boogie, bebop or ragtime, no matter what it is called, jazz is a language that translates across cultures and continents, bridging gaps and bringing unity.