Through consultation, collaboration and consensus, the UN chief on Monday described outgoing President of the General Assembly, María Fernanda Espinosa, as “a champion for multilateralism” who had succeeded in making the United Nations “relevant to all”.

In a fast-changing world, Secretary-General António Guterres noted that humanity’s most pressing issues “are increasingly interlinked”.

“From the climate crisis to migration flows and rising inequality, from waves of intolerance to harnessing technology for good, one thing is certain: global issues require global solutions”, he stated at the closing of the 73rd session of the General Assembly.

As “our universal platform to build consensus for the common good”, he said it had been his “privilege” to work with the Assembly under the leadership of Ms. Espinosa, the fourth woman to serve as the body’s President.

See below our photo story on the history of women leaders in the General Assembly:

The UN chief commended her “ambitious priorities for this session, which addressed crucial matters of international impact and concern, including gender equality, migration and refugees, decent work for all, environmental protection, the rights of people with disabilities, promoting the voices of young people to advance peace and security, and revitalizing the work of the United Nations”.

Her commitment to ending plastic pollution “also stands out”, said Mr. Guterres. “I am confident that her successful term will pave the way for increasing the participation of women in the political sphere around the world, and for accelerating progress towards gender equality within and beyond the United Nations”.

Many of the issues debated, raised and accomplished during the 73rd session are “testament to what can be achieved through international cooperation”, he continued, citing the adoption of two Global Compacts on Migration and Refugees as “remarkable examples”.

The UN chief maintained that comprehensive reforms continued “at an unprecedented pace and scale” over the past year to make the Organization more “nimble, effective and efficient – and to better serve ‘we the peoples’ of the world”.

Looking ahead, to the 75th anniversary of the UN next year, he thanked Ms. Espinosa for “her leadership and partnership”, and said he looked forward to working with President-elect Tijjani Muhammad-Bande, of Nigeria.

“Together, let us continue to advance our mission to build a more peaceful and prosperous world for all on a healthy planet”, concluded the Secretary-General.

Before passing the gavel

Addressing journalists in her last press conference as the General Assembly chief, Ms. Espinosa presented some highlights of her Presidency.

It's been an absolute honour to serve as President of the #UNGA. I came into Office with one mission, making the @UN relevant for all. I leave today with an unwavering sense of accomplishment. To @BandeTijjani, I wish you all the best as we continue to take the @UN to new heights pic.twitter.com/hDgnSmd1Nr

She maintained that her practice of formally reporting back to Member States every three months, had been “very useful, especially for the smaller Missions” that cannot cover all the agenda items, “so they can refer to the reports I share with them”.

While noting that the 73rd Session, has adopted 341 resolutions, with a few more expected, she has been told this is “the highest number in several years”.

“Basically, my call to Member States has been: let´s read the resolutions we have adopted again and let´s deliver and implement them using this norm-setting power of the General Assembly”, she said.

“We have delivered on all seven priorities”, she told correspondents, highlighting the global campaign against plastic, the Women in Power high-level events, and “our work in advancing the multilateral agenda”.

Ms. Espinosa flagged that “we have managed together to transform the UN Headquarters in an area free from single-use plastics”, owing to the support of Member States, the Secretary-General, UN staff, and journalists, saying: “I feel very proud of what we achieved”.

“Our global communications campaign to beat plastic pollution reached in the region of 400 million people worldwide, and we have sown the seeds for more global action against the modern-day challenge of our seas and rivers”, she stated.

Her office also led preparations for six mandated high-level meetings to be held in the margins of upcoming General Debate and were responsible for organizing the High-Level meetings, including the first Sustainable Development Goal (SDG) Summit, which will kick off next Tuesday.

“Everywhere I have been, as your President of the General Assembly, I sought to listen to people”, she continued, from women, girls, youth and the elderly, to philanthropists working for a better world.  “That was my condition to visit countries in order to have contact with people on the ground”.

The outgoing General Assembly President closed by saying that continued listening is “key” to creating “a more just, prosperous and sustainable world”. 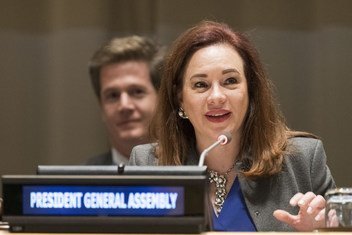 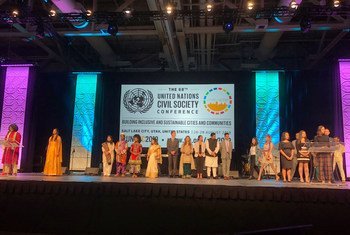 Partnerships with civil society and youth are essential to achieving the goals of key UN-backed international agreements, such as the 2030 Agenda for Sustainable Development, and the Paris Agreement on climate change, María Fernanda Espinosa, the President of the United Nations General Assembly, told delegates at the UN Civil Society Conference on Wednesday.