Unsplash/Malcolm Lightbody
Burning fossil fuels emits a number of air pollutants that are harmful to both the environment and public health.

António Guterres told delegates on Thursday that he was inspired by the mobilization of civil society, including young people, indigenous communities, women’s groups, cities and private sector, highlighting that the climate action struggle requires all hands-on deck.

“We know what must be done. Keeping the 1.5 goal within reach means reducing emissions globally by 45 per cent by 2030. But the present set of Nationally Determined Contributions – even if fully implemented – will still increase emissions by 2030,” he reminded participants during a High-Level Event at the plenary.

He then referred to the latest joint analysis by the climate and environment UN agencies, which shows that even with the latest pledges and commitments made at COP26, we remain on track for a catastrophic temperature rise well above 2 degrees Celsius.

“I welcome the recognition of this fact in yesterday’s US-China cooperation agreement – an important step in the right direction. But promises ring hollow when the fossil fuels industry still receives trillions in subsidies, as measured by the IMF. Or when countries are still building coal plants or when carbon is still without a price,” he emphasized.

Mr. Guterres called on every country, city, company and financial institution to “radically, credibly and verifiably” reduce their emissions and decarbonize their portfolios, starting now.

Taking stock of progress, and a new way to measure it

While the UN chief recognized that current efforts to tackle climate change are far from enough, he highlighted the progress achieved during COP26 in Glasgow, including the commitment to halt and reverse deforestation, several net-zero commitments from cities and other alliances and pledges on the phasing out of coal and the investment in clean energies around the world.

“We need pledges to be implemented. We need commitments to turn concrete. We need actions to be verified. We need to bridge the deep and real credibility gap,” he added, saying that as an engineer, he knows that durable structures need solid foundations.

Mr. Guterres announced that he will establish a High-Level Expert Group to propose clear standards to measure and analyze net zero commitments from non-State actors which will submit a series of recommendations next year.

“We must be able to measure progress and to adjust when off track…We must now zoom in on the quality and implementation of plans.  On measuring and analyzing. On reporting, transparency and accountability”, he said, asking actors to cooperate with the UN and hold each other accountable.

“Only together can we keep 1.5 degrees within reach and the equitable and resilient world we need,” he concluded.

Update: Negotiations ‘not there yet’

Meanwhile, COP26 President Alok Sharma gave an update on the negotiations over the last 24 hours. He said discussions on the global goal of adaptation were concluded, and that he hoped they would be adopted.

Mr. Sharma recognized there has been progress and acknowledged the spirit of cooperation and civility demonstrated throughout the negotiations, but he cautioned that “they are not there yet” on the most critical issues.

“There is still a lot more work to be done, and COP26 is scheduled to close at the end of tomorrow. Time is running out,” he told journalists, assuring them that negotiators are “rolling up their sleeves” to find solutions that have been elusive for six years right now.

The COP President also said, echoing Mr. Guterre’s words, that the world needs to rise to the challenge and increase ambition.

UN News/Laura Quiñones
Demonstration outside the COP26 Climate Conference in Glasgow, Scotland, representing the victims of the climate crisis.

Time is running out for oil and gas: A new alliance is formed

In a new positive development earlier in the day, and in line with the UN chief’s call, 11 countries presented the Beyond Oil and Gas Alliance (BOGA) at COP26.

Ireland, France, Denmark, and Costa Rica among others, as well as some subnational governments, launched a first of its kind alliance to set an end date for national oil and gas exploration and extraction. So far, similar announcements have only been made regarding coal mining.

BOGA core members said during a press conference that they were committed to ending all new concessions, licensing, and leasing rounds.

“This is about courage to really come with concrete action. We are hearing the world outside these walls, and we know that science is clear that we really need to accelerate action and when we talk about how to do it, we are addressing the demand action and yes we know it is important…but we can’t just leave the supply side there, we need to start this conversation,” said Andrea Meza, Minister of Environment and Energy for Costa Rica, during a press conference.

“Every dollar that we invest in fossil fuel projects is one less dollar for renewables and for the conservation for nature…it’s about how to really leverage momentum to start this conversation,” she added.

Members of the Climate Action Network, which is made up of more than a thousand civil society organizations, welcomed the initiative calling it “long overdue”.

“Why is this significant?... It’s COP26, and for the first time, we have a draft of the Glasgow cover decisions that includes fossil fuels… the launch of BOGA means things are shifting, that the conversation is evolving on climate change, and that the need to phase out all fossil fuels is no longer a taboo for many countries,” said Romain Ioaualalen, the Global Policy Campaign Manager at Oil Change International.

In his view, with all the countries that are negotiating at COP26 ,and in particular countries from the global North that are still massively producing oil and gas and have no plans to stop, there was only one real question:

The commitment of cities around the world

Video screenshot
Claudia López, the mayor of Bogotá, Colombia, and member of the C40 cities group, arrived to the COP26 to present the climate actions Bogota is taking already and to claim more climate action and commitment from national governments and corporate companies.

Cities and municipalities in California are among the founders of the new BOGA alliance. Meanwhile, cities from around the world – 1,049 to be exact – presented at the start of COP26 a commitment to halve their emissions by 2030 and become Net-Zero by 2050.

“Of almost 30 years of COP meetings, COP26 is the first one in which local and city governments came with a voice and led by example. It is the first time that we were able to show the pledge of 1,049 cities who already have climate action and investments,” Claudia Lopez, the Mayor of Bogota, Colombia, told UN News.

Further, Ms. Lopez, who is also the co-chair of the C40 cities group, which drafted the pledge, said cities and municipalities were coming together to show that commitment, and to ask the national governments and the private corporations to do their part, “to align their incentives and their investments with climate action plans with our citizens' demands for actual change”.

The last of the thematic days at COP26 was laser-focused on ‘Cities Regions and Built Environment’, which highlights that with 68 per cent of the global population expected to be living in cities by 2050, it will be vital to build a sustainable and resilient urban future.

“Mayors are boots on the ground, the boats on the water, the closest to the people and we have to get results, it doesn’t matter what your party affiliation is when the storms and extreme weather events are coming, and they’re coming with greater frequency and greater intensity, they are costing more,” said Sylvester Turner, Mayor of Houston, the fourth largest city in the United States, explaining how the work in the cities can drive national action.

The COP26 hosts highlight that accelerating the transition to net zero emissions for the world’s cities will be vital to achieving the goal of keeping global warming to close to 1.5 degrees.

Unsplash/chuttersnap
Sustainable cities are helping in the battle against climate change.

According to UN Habitat, which deals with human settlements and sustainable urban development, cities consume 78 per cent of the world’s energy and produce over 60 per cent of greenhouse gas emissions – but account for less than two per cent of the Earth’s surface.

“We build the equivalent of new buildings the size of Paris every week, and if that is the way we are expected to expand we need to think about how we do it because of climate, biodiversity, livability, quality of life. We need to build better”, she said.

She also pointed out that over half of the buildings that will be standing in 2060 haven’t been constructed yet.

“We don’t put enough emphasis on resilience, a typical building built today will still be in use by 2070, and the climate impact that it will need to withstand will be very different. Renovation can deliver both high level efficiency and livability,” she explained.

According to UNEP, only 19 countries have added codes regarding energy efficiency for buildings and put them into effect, and most of future construction will occur in countries without these measures.

“For every dollar invested in energy efficient building, we see 37 going into conventional buildings, that are energy inefficient. We need to move from these incremental changes because they are way too slow, we need a real sector transformation. We need to build better,” she said, calling for more ambition for governments if they are to fill the promise of net-zero.

Want to know more? Check out our special events page, where you can find all our coverage of the COP26 climate summit, including stories and videos, explainers, podcasts and our newsletter. 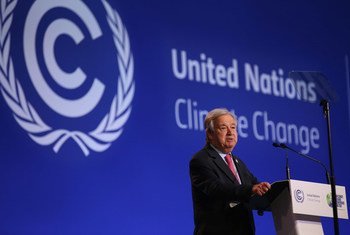 As the World Leaders Summit opened on day two of COP26, UN chief António Guterres sent a stark message to the international community. “We are digging our own graves”, he said, referring to the addiction to fossil fuels which threatens to push humanity and the planet, to the brink, through unsustainable global heating. 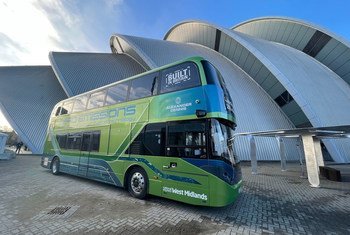 Era free of fossil-fuel powered vehicles comes into focus at COP26; draft outcome is met with calls for more ambition

A world where every car, bus and truck sold is electric and affordable, where shipping vessels use only sustainable fuels, and where planes can run on green hydrogen may sound like a sci-fi movie, but here, at COP26, many governments and businesses said they have started to work to make it a reality.