Fittingly, the sun broke through the clouds over Glasgow on Thursday as delegations and participants prepared for ‘energy day’ at COP26, one of the key thematic sessions taking place during the UN climate summit.

Traveling from the city centre in the special electric bus provided by the organizers, the UN News team arrived at the venue to find activists outside the gates urging countries to end their dependence on coal, gas and oil.

Some of the activists dressed as Pikachu, the short, chubby rodent mascot of the Japanese anime Pokémon, which in the series, is capable to organically launch strikes of electricity. Others armed with picket signs in different languages, turning on their megaphones to shout a call for climate justice: “No more fossil fuels”.

It’s Energy Day at #COP26The end of coal power is now within sight, and clean power is scaling up.Find out more 👇#TogetherForOurPlanet

Inside the Scottish Event Campus, the main meeting of the day started with the COP26, co-hosts echoing the words of the UN Secretary-General António Guterres: “consign coal to history”.

President of the Conference Alok Sharma announced the new Global Clean Power Transition Statement, a commitment to end coal investments, scale up clean power, make a just transition, and phase out coal by the 2030´s in major economies, and in the 2040´s elsewhere.

The pledge has 77 signatories, including 46 countries such as Poland, Vietnam and Chile, 23 of which are making commitments on ending coal for the first time, he explained.

“All this helps to power the world to net-zero. We know that there is more to be done, it’s up to all of us governments, business, financial institutions and civil society and we must continue building the moment though alliances and coalitions. I do believe that the end of coal is in sight. I believe that we are getting to a point where we consign coal power to history”, he told the plenary room.

Unfortunately, the statement leaves out the biggest coal financers China, Japan and Republic of Korea, which however, committed last year to end overseas finance for coal generation by the end of 2021.

Meanwhile, the Powering Past Coal Alliance, which aims to achieve coal phase-out in a sustainable and economically inclusive way, welcomed new members today that include seven countries and 14 financial institutions.

While saying that the commitments were somewhat encouraging, civil society organizations were ‘not having it’ outside the plenary room.

In separate press conferences, the German NGO Urgewald and the Climate Action Network expressed their despair regarding the current energy crisis.

“The last two years we have seen a surge in coal policies but hardly anything substantial on oil and gas. The reason for that is that financial institutions who want to walk away from fossil fuels face a major problem which is a lack of information”, said the finance campaigner of Urgewald.

The human rights and environmental organization published their latest Global Oil and Gas Exit List, which argues that 506 upstream oil and gas producers are planning to add 190 billion of barrels of oil equivalent to their production portfolios within the next 1 to 7 years.

“At least 96 per cent of gas and oil producers are looking to expand their assets”, added the Urgewald representative. “The industry is on a reckless expansion course with dirtiest production forms making up 50 per cent of new projects”.

Meanwhile, Jing Zhu, director of the energy justice programme at the Center for Biological Diversity in the United States stressed that: “We no longer have time for fossil fuels”.

“We have seen the G20 go the opposite direction. Between 2018 and 2020, G20 countries have committed 188 billion dollars to fossil fuels. That’s 2.5 times the amount that they have put for renewables, that’s absolutely atrocious”, she said.

Unsplash/Andreas Felske
Burning fossil fuels emits a number of air pollutants that are harmful to both the environment and public health.

Ms. Zhu, however, cautiously announced good news during the press conference. A group of governments and public finance institutions across the world, including in the US, European Union, Canada and UK, have pledged to end direct support for the ‘unabated’ fossil fuel energy sector by the end of 2022.

The joint announcement made this morning promises an end to direct support for international fossil fuel projects “except in limited and clearly defined circumstances that are consistent with a 1.5°C warming limit and the goals of the Paris Agreement”.

“This is the first political commitment to phase out oil and gas finance as well, not only coal. If implemented this will shift 18 billion dollars a year from fossil fuels to renewable energy”, Ms. Zhu, also member of the Climate Action Network, explained.

The commitment, while historic, it’s not sufficient, she said, asking China, Japan and Republic of Korea to join it as well.

“We are dealing with our fossil addiction. We urge the end of fossil fuel development around the world, domestically and internationally”.

“Carbon capture and storage and other fossil fuel projects that have some sort of technical fix are still allowed, is very similar to the false net zero promises of 2050. It is consistent with the lack of leadership of courage. At the same time, if we want to give them the benefit the doubt, there is a pledge for clean energy especially clean energy manufacture from a lot of this countries as well. They view domestic investments as potential boons for their own economies. The US for example have their own plans for exporting that renewal energy”, Ms. Zhu added.

Damilola Ogunbiyi, Special Representative of the UN Secretary-General for Sustainable Energy for All, also made a call for action during Thursday's main event, reminding that the energy sector accounts for 2/3 of greenhouse gas emissions.

“759 million people in this world still lacks access to basic electricity, and over 2.6 billion don’t have access to clean cooking solutions”, she underscored.

The Special Representative cited the UN Environmental Programme's recent Emissions Gap Report, which indicates that we are on a path of a dangerous 2.7-degree global temperature raise by the end of the century that would threaten life as we know it.

“We need to radically rethink how we deliver energy services; we must answer the call of the UN Secretary General to consign coal into history… After 2021 no new coal plants should be in the pipeline”, Ms. Ogunbiyu urged.

According to the UN Development Programme (UNDP), an average of $423 billion dollars of public funds are spent every year on fossil fuel subsidies, and despite international commitments, subsidies are not being phased out but are increasing.

These subsidies are a major obstacle to achieving climate and sustainable development goals because they encourage investment in pollution and discourage renewable energy.

“We are running out of time, and we have no choice but to be decisive and we commit to the collaboration and financing necessary to make a just equitable and inclusive energy transition possible for those who have contributed less to climate change”, the Special Representative highlighted.

Phasing out fossil fuels and taxing carbon will spur growth and innovation. UNDP studies show that the move could provide for up to 10 years of spending on green innovation and infrastructure which would bring growth and new, safer jobs. 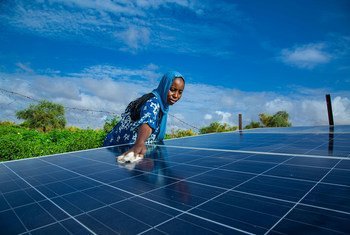 It’s ‘Finance Day’ at COP26, and the spotlight is on a big announcement: nearly 500 global financial services firms agreed on Wednesday to align $130 trillion – some 40 per cent of the world’s financial assets – with the climate goals set out in the Paris Agreement, including limiting global warming to 1.5 degrees Celsius. 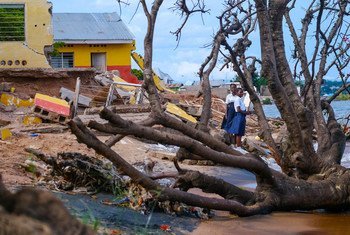