Speaking alongside the UK Prime Minister in New York on Monday the UN Secretary-General, António Guterres, has called on world leaders for “decisive action now to avert climate catastrophe.”

Mr. Guterres joined an emergency summit convened and attended by United Kingdom premier Boris Johnson, to press for more action on climate finance and other measures ahead of the watershed UN COP26 climate conference, which begins next month in Scotland.

The Informal Climate Leaders Roundtable on Climate Action took place behind closed doors at UN Headquarters, as the high-level week of the General Assembly gets underway.

World leaders addressed the gaps that remain on the actions needed from national governments, especially the G20 industrialized powers, on mitigation, finance and adaptation.

“Saving this and future generations is a common responsibility,” the UN chief told journalists in a press stakeout following the event.

For him, the roundtable was “a wake-up call to instill a sense of urgency on the dire state of the climate process ahead of COP26”, the UN Climate Conference happening in Glasgow at the end of October.

Last Friday, the United Nations Framework Convention on Climate Change issued a report on the Nationally Determined Contributions of all Parties to the Paris Agreement saying the world is on a catastrophic pathway to 2.7-degrees of heating.

According to the report, to limit temperature rise to 1.5 degrees, a 45 per cent cut in emissions is needed by 2030 and carbon neutrality by mid-century.

Instead, commitments by countries to date, imply an increase of 16 per cent in greenhouse gas emissions in 2030 compared to 2010 levels.

With COP26 just weeks away, the UN chief called on Member States to deliver on three fronts.

First, keep the 1.5-degree goal within reach. Second, deliver on the promised $100 billion dollars a year for climate action in developing countries and, third, scale up funding for adaptation to at least 50 per cent of total public climate finance expenditure.

According to the Intergovernmental Panel on Climate Change, the 1.5-degree goal is still in reach, but a dramatic improvement is needed in the Nationally Determined Contributions (NDCs) from most countries.

For Mr. Guterres, leadership must come from the G20 countries, because they represent 80 per cent of greenhouse gas emissions.

He then pointed to one specific energy challenge; the continued use of carbon-emitting coal.

If all planned coal power plants become operational, the world will be well above 2 degrees. Instead, OECD nations need to end coal use by 2030 and developing nations need to follow suit by 2040, he said.

On finance, developed nations need to implement their promise to mobilize $100 billion a year for climate action in the developing world from 2021 to 2025. They did not in 2019 and 2020, and, according to OECD calculations, there is a shortfall this year of around 20 billion dollars.

Finally, on adaptation, finance for this area currently represents only 21 per cent of total climate funding. That is $16.7 billion a year.

Yet adaptation costs in the developing world are $70 billion dollars a year, and they are projected to rise to as much as $300 billion, by 2030.

“This is why I have been asking all donors and financiers to commit to allocating 50 per cent of climate finance to adaptation,” Mr. Guterres said.

UK’s Prime Minister warned that “history will judge” the world’s richest nations if they fail to deliver on their pledge to commit $100 billion in annual climate aid ahead of COP26. He placed the chances of securing the money before November at “six out of 10”.

“We cannot let climate action become another victim of coronavirus. Let us be the leaders who secure the very health of the planet for our children, grandchildren and generations to come,” Mr. Johnson said at the event.

The UK’s Prime Minister also assured his country “will lead by example, keeping the environment on the global agenda and serving as a launch pad for a global green industrial revolution.” But warned: “No one country can turn the tide, it would be akin to bailing out a liner with a single bucket.” 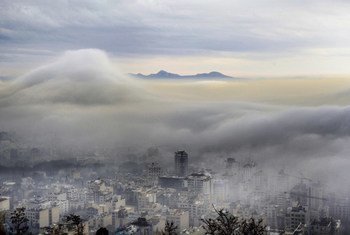 Unless wealthy nations commit to tackling emissions now, the world is on a “catastrophic pathway” to 2.7-degrees of heating by the end of the century, UN Secretary General António Guterres warned on Friday.