Celebrating the UN’s 75th anniversary last year, prompted major internal discussion about its future, and a new direction away from the post-World War Two consensus of its early days. These reflections have resulted in Our Common Agenda, a landmark new report released on Friday by the UN Secretary-General, setting out his vision for the future of global cooperation.

Mr. Guterres launched the report at a meeting of the General Assembly on Friday, prefacing his remarks with a scathing overview of the parlous state of a world he described as being under enormous stress, and warning that the world risks a future of “serious instability and climate chaos”.

“From the climate crisis to our suicidal war on nature and the collapse of biodiversity, our global response is too little, too late”, declared the Secretary-General. “Unchecked inequality is undermining social cohesion, creating fragilities that affect us all. Technology is moving ahead without guard rails to protect us from its unforeseen consequences.”

The UN chief went on to describe the extensive consultations that fed into its development, a listening exercise that led the UN to the conclusion that enhanced multilateralism is seen as the way to deal with the world’s crises (see text box, below).

Two contrasting futures are laid out in the report: one of breakdown and perpetual crisis, and another in which there is a breakthrough, to a greener, safer future.

The doomsday scenario describes a world in which COVID-19 is endlessly mutating, because rich countries hoard vaccines, and health systems are overwhelmed.

In that future, the planet becomes uninhabitable due to rising temperatures and extreme weather events, and a million species are on the brink of extinction.

This is coupled by a continuous erosion of human rights, a massive loss of jobs and income, and growing protests and unrest, which are met by violent repression.

Or, we could go the other way, sharing vaccines equitably, and sparking a sustainable recovery in which the global economy is retooled to be more sustainable, resilient, and inclusive.

By decarbonizing the economy, global temperature rises would be limited, countries heavily affected by climate change would be supported, and ecosystems would be preserved for future generations, the report says.

This approach would herald a new era for multilateralism, in which countries work together to solve global problems; the international system works fast to protect everyone in emergencies; and the UN is universally recognized as a trusted platform for collaboration.

The importance of protecting vulnerable groups is recognized in commitments to gender equality and leaving no-one behind, which include reinforcing social protections and promoting gender parity.

Ensuring a more sustainable global economy is identified as a goal, with support for the poorest, and a fairer international trading system.

Climate action gets a special mention, with commitments to the goal of limiting warming to 1.5 degrees above pre-industrial levels, and net zero carbon emissions by 2050, and end to fossil fuel subsidies, a transformation of food systems, and a package of support for developing countries.

And, noting the ongoing health crisis created by the COVID-19 pandemic, the report calls for a $50 billion vaccination plan, to at least double vaccine production, ensuring that they reach at least 70 per cent of the global population in the first half of 2022.

Summit of the Future

© World Bank/Arne Hoel
People in Uganda and around the world are using digital tools during the COVID-19 pandemic.

In order to achieve these aims, the Secretary-General recommends a Summit of the Future, which would “forge a new global consensus on what our future should look like, and how we can secure it”.

The Summit would address the perennial issues of peace and security, setting out a “New Agenda for Peace”, with more investment for peacebuilding, support for regional conflict prevention, a reduction of strategic risks such as nuclear weapons and cyberwarfare - and a dialogue on outer space to ensure that it is used peacefully and sustainably.

The application of human rights online would also be covered at the Summit, in a Global Digital Compact, to ensure that new technologies are a force for good. Other tracks would include; the peaceful and sustainable use of outer space, and the management of future shocks and crises.
The Summit, said Mr. Guterres, should take account of today’s more complex context for global governance…our goal should be a more inclusive and networked multilateralism, to navigate this complex landscape and deliver effective solutions.

On top of the Summit of the Future, the report proposes biennial high-level meetings at the level of Heads of States and Government, between the G20, ECOSOC, the heads of International Financial Institutions, and the UN Secretary-General, aimed at creating a more sustainable, inclusive and resilient global economy.

The report also calls for better partnerships between governments, multilateral organizations, the private sector, and civil society; and an emergency platform to better prepare for global crises, with stronger global health security.

One example is the creation of a Futures Lab, which would work with partners including governments, academia, civil society, and the private sector, to issue regular reports on megatrends and catastrophic risks.

In addition, measures on education, skills training and lifelong learning are proposed, including a Transforming Education Summit planned for 2022, to address the learning crisis and expand opportunities and hope for the world’s 1.8 billion young people, and a a Global Social Summit, to be organized in 2025, which would coordinate international efforts to create peaceful, secure societies based on human rights and dignity for all.

These meetings would coordinate efforts to bring about inclusive and sustainable policies that enable countries to offer basic services and social protection to their citizens. “Governments should never again face a choice between serving their people or servicing their debt”, said Mr. Guterres.

@ MINUSMA
peacekeepers from the Ivorian contingent to MINUSMA, the United Nations mission in Mali, patrol the area

One of those institutions is, of course, the UN itself, which, says the report, is due an upgrade, with a more participatory and consultative approach, gender parity by 2028, the re-establishment of the Secretary-General’s Scientific Advisory Board, and a policy that puts people at the centre of the UN System, taking into account age, gender and diversity.

Other UN-related proposals concern the improved participation of youth in the political process and efforts to cut youth unemployment. The reports recommends the appointment of a Special Envoy for Future Generations, to give weight to the interests of those who will be born over the coming century, and a new UN Youth Office to strengthen engagement with young people across the work of the Organization.

As the UN embarks on the Decade of Action – 10 years to make real progress to deliver the promise of a sustainable, fairer future by 2030 – there is an opportunity to reshape the world for the better, with multilateralism at the heart of the process.

However, as the “breakdown scenario” shows, failure to work effectively together risks significant, irreversible damage to the planet and even, life itself: In his speech to the General Assembly, Mr. Guterres underlined that Our Common Agenda is driven by solidarity, “the principle of working together, recognizing that we are bound to each other and that no community or country, however powerful, can solve its challenges alone.”

Our Common Agenda: the context

LIVE: UN 'only as strong as its members' Guterres tells UN75 event, looking to the future 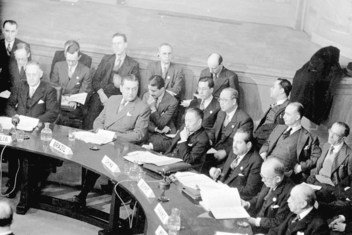 In his first major speech of the year, the UN Secretary-General underlined the need for global cooperation to address today’s challenges such as the COVID-19 pandemic and climate change. 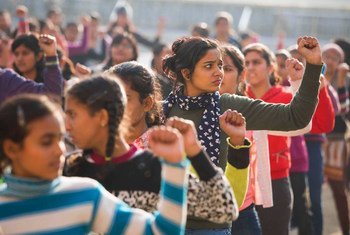 LIVE: UN 'only as strong as its members' Guterres tells UN75 event, looking to the future

On Monday the UN marks the 75 years of the Organization with a High-level meeting featuring many world leaders. The theme is, “The future we want, the United Nations we need”, and there is a strong focus on the role of youth, and ensuring the UN remains relevant for future generations.

•   Lid Is On podcast, narrated by Julia Roberts