We need to give voice to ‘We the Peoples’, says UN chief

UN Photo/Jean-Marc Ferre
Secretary-General António Guterres (center) sits down for a dialogue during a UN75 event with youth rights activists at The Graduate Institute in Geneva.
25 February 2020
UN Affairs

For an Organization that is seen as all too ready to give advice, the United Nations welcomed a major role reversal on Tuesday: young people from all over the world were gathered in Switzerland to voice their concerns, outline their vision for a better future, and give Secretary-General António Guterres their advice on steering the world body through todays’ turbulent waters.

“This  globalization that has created so much wealth around the world has been leaving people behind, has been squeezing middle classes in different parts of the world and is creating also the feeling that it is not working for all," the UN chief told an audience of more than 600 people gathered in an auditorium at The Graduate Institute of International and Development Studies in Geneva.

"This is the beginning of a new dynamic of a relationship between the United Nations and 'We, the Peoples'. How should the UN adapt to the changing world?"@antonioguterres engages in an interactive discussion on #ShapingOurFuture with an audience of 600+ youth at @IHEID. #UN75 pic.twitter.com/x1YnmsmUVK

The discussion is one of the spotlight events taking place in the context of the UN Human Rights Council’s 43rd session, which is under way in the Swiss city through 20 March.

The heartfelt and sometimes blunt feedback to the UN leadership came as part of series of conversations being held over the coming year for the UN75 campaign, marking the 75th anniversary of the UN Charter and which aims to listen to people’s hopes and fears – as well as their expectations of the UN – in a rapidly changing world.

The Secretary-General set the stage for the discussion saying: “So, the UN, in a situation like this, needs to ask itself: ‘Are we doing what we should be doing? Are we responding to the anxieties and to the aspirations of the peoples of the world? Or do we need to change, do we need to adapt to this new world?’”

‘Open up’ and create an ‘Everyone’s UN’

“You need to make the UN more democratic and more participatory, and open it up to the public, and create something like ‘Everyone’s UN’,”  said Martin Ostermeier from Germany, who currently works with the International Labour Organization (ILO), and is  a representative of  Young UN: Agents for Change, a network of over 1,700 young people working across the UN system.

He was one of six panellists on stage with Mr. Guterres.

“This dialogue is a great first start, but it shouldn’t happen every 75 years. It should happen more often,” he added, drawing laughter from the audience.

Marie-Claire Graf, a Youth Parliamentarian and student at the University of Zurich, told the Secretary-General: “Open up decision-making, be bold, be unprecedented but also really give ownership to the people. Because we can’t just hide in our ivory towers and think people will trust us.”

The notion of opening the UN up to more democratic participation and processes, as well as to the inclusion of young and marginalized people and groups, including refugees, found a very loud echo among the participants.

UN Photo/Jean-Marc Ferre
A question for Secretary-General António Guterres during the UN75 event at The Graduate Institute in Geneva.

“My advice would be not just to listen to us, but to listen to people who have small voices or who have no voice at all,” said Adiba Qasim, a young Yazidi survivor and refugee from Iraq who is currently studying in Switzerland.

“I would like to see a non-patriarchal world, because I believe that the patriarchy…cuts across all instances, not just gender, it cuts across race, it cuts across social classes. I’d like to see world that is non-racist world, as well,” said Jasmine Pokuaa Oduro, a dual citizen of Ghana and the UK, who later issued a very direct piece of advice to the UN for its use of stereotyped images on in income inequalities.

“One thing that I’d like the UN to start to prioritize now, and I think they could start doing it from now, is to stop using black and brown children in their publications to represent poverty.”

Many who took the floor expressed their desire for transformative policies that would broaden opportunities both within and across societies.

The need to address distortions and injustices brought about by severe disparities in wealth was a common thread running through the discussion – with several speakers highlighting the need to hold hyper-wealthy individuals and transnational corporations to greater account.

“I would like to see that multinational corporations are held accountable for their actions,” said Jan Harvey Parafina, a student from the Philippines. “Especially if they already violating human rights, as well as degrading the environment.”

This is the beginning of new dynamic of relationships between the UN and ‘We the Peoples’, and this relationship will hopefully be able to shape a new kind of multilateralism – UN chief Guterres

Equally pervasive was the concern about the future of the planet in the context of climate change.

“As we are facing the extinction of humanity, my advice is to declare a planetary emergency – right now,” Ms. Graf urged the Secretary-General.

She stressed: “We can’t solve this crisis with small fixes; we can’t just adjust ;somewhere, we cannot just put solar panels on the roof and think that this is going to solve the climate crisis. We must go much bigger.”

Mr. Guterres summed up by conceding that that, as the United Nations, “we need to be humble, to recognize our failures and to be able to understand that we need to give the voice to ‘We the peoples’ that we are supposed to represent as the UN.”

“That’s a very clear message I got from everybody here,” said the UN chief.

In addition to broad aspirational goals and transformative policies, some speakers also made very concrete suggestions for areas in which the UN could concentrate in a more targeted way – on emerging technological threats, for example, and in investing in programmes that can foster youth leadership.

“I’d like to see a global concerted effort to tackle the issue of fake news and the spread of misinformation. Because one of the most horrifying scenarios that I can imagine is a world where you cannot tell anymore what is real and what is false, and that’s becoming increasingly likely,” said Marwan Al Chazli, an engineering student from Egypt.

He said: “I would advise a focus on youth programmes that empower young people to become changemakers. Give young people the resource to do amazing things, and they will.”

Capping off his two-days in Geneva, Mr. Guterres told the young people gathered at The Graduate Institute that the conversation represented a new beginning for the UN.

“This is the beginning of new dynamic of relationships between the UN and ‘We the Peoples’, and this relationship will hopefully be able to shape a new kind of multilateralism – a multilateralism that is inclusive, in which not only the governments, but also civil society, academia, and local communities have a voice and have influence, he said, and added: “If we are able to do that, I think it will be a big change.”

“There will be a lot of resistance. I count on you to overcome that resistance.”

♦ Receive daily updates directly in your inbox - Subscribe here to a topic.
♦ Download the UN News app for your iOS or Android devices.
UN75 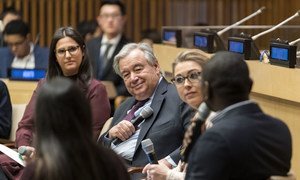 Six youth leaders from around the world were at UN Headquarters in New York on Wednesday to share their ambitious visions for a future where international cooperation is prioritized and everyone’s voice is heard.