Agency for the Assessment and Application of Technology (BPPT)
An 'energy patriot' is supporting Bangko village in South Sulawesi, Indonesia, as part of a communal solar energy project.

For millions of villagers in Indonesia’s remote areas, a 12-hour-per-day erratic electricity supply is the norm. With students studying by candlelight at night and health centres not running at full capacity, these communities face an uphill struggle to improve their well-being.

But a recently launched UN-backed initiative from the Indonesian Ministry of Energy and Mineral Resources (MEMR) could change that, thanks to a group of Indonesians dubbed “energy patriots”, who have been tasked with boosting the use of clean energy resources, with the goal of improving access to healthcare, education and economic development in rural villages.

29-year-old environmentalist Ristifah is one of 23 energy patriots recruited by MEMR as part of the UN Development Programme’s (UNDP) ACCESS clean energy project. The four-year initiative aims to instal solar panels in some of the remotest islands of Indonesia.

Growing up in a rural village, Ristifah experienced coping with a limited electricity supply first-hand; “We only had three hours of electricity a day”.

With limitations on when they could charge their phones and access the internet, Ristifah and her peers felt cut off from developments across the rest of Indonesia.

Now, Ristifah and her colleagues will be spending a year living in their assigned villages to prepare the infrastructure for solar energy generation.  Their tasks include helping the community to determine electricity tariffs, liaising with contractors, recruiting operators and technicians, and helping the local renewable energy service providers to manage new power plants.

An urgent need for clean energy

Indonesia, the world’s fourth most populous country, urgently needs clean energy capacity: the blistering pace of economic development over the past decade has lifted millions out of poverty, but it has also dramatically increased the demand for energy.

The government has pledged to phase out all coal-fired power stations by 2055, but some 30 million people out of the country’s population or around 267 million do not have adequate access to electricity.

Ristafah and her colleagues will oversee the installation of 1.2 MW off-grid solar- power plants, which will provide electricity for around 20,000 people in remote villages; although that is only a fraction of Indonesia’s total unmet needs, the programme serves as a blueprint for rural development that goes beyond basic socio-economic support.

Agency for the Assessment and Application of Technology (BPPT)
Some 126 homes in Bangko village in South Sulawesi, Indonesia will benefit from solar powered electricity.

‘I dream of the day when the houses sparkle with lights’

Indonesia is the world’s largest archipelago nation, with 17,000 islands sprawled across three different time zones, many of which are out of reach of the national electricity grid.

Ristifah will be assigned to a coastal fishing village of Muna, in southeastern Sulawesi Province. Like most island villages, Muna is heavily dependent on fuel-fired generators for its electricity. Such generators are often inadequate for communities’ needs, and the toxic fumes they spew that can harm the environment and cause health issues including respiratory illnesses and cancer.

Ristifah bears the heavy responsibility of ensuring the success of the project, but it’s one she’s keen to embrace: she will move 1,500 km away from her home on Indonesia’s most populous island of Java, to take up her post as Muna’s energy facilitator. But she says that the chance to make a difference in the lives of her compatriots makes that sacrifice worthwhile.

“I hope to inspire more girls to achieve higher education,” she said. “I dream of the day when the houses sparkle with lights that the community installed, and children can have a better future.”

© UNESCO/Togean Togo Una-Una Biosphere Reserve – Indonesia
There are some 17,000 islands in Indonesia, some of which lack reliable power sources

“The difference in the pace of development between urban and rural areas has often been stark, in large part due to discrepancies in access to power,” said Ms. Julliand says, adding that the work undertaken by the energy patriots will “ensure communities have a say in how important infrastructure projects that affect their lives are developed. They can go a long way towards addressing urban-rural inequality.”

Promoting the adoption of sustainable energy sources is a key component of the UN-backed Sustainable Development Goals or SDGs. Goal 7 on affordable and clean energy aims to accelerate access to electricity in poorer countries whilst improving energy efficiency and renewable sources of power.

Verania Andria, Senior Advisor for UNDP’s Sustainable Energy Strategic Programme in Indonesia, said that the project drives home the “importance of our principle of leaving no behind as Indonesia makes great strides towards economic development,” adding that the “energy patriots show us that we can implement inclusive and sustainable rural energy development projects that could be replicated in rural communities around the world."

Global push needed to ensure ‘clean, affordable and sustainable electricity’ for all 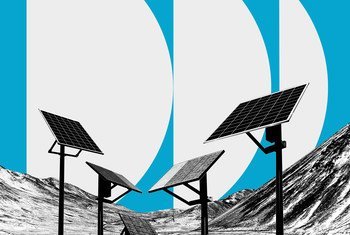 In the first episode of the No Denying It climate action podcast series, actor Ezra Miller introduces Chief Dana Tizya-Tramm, of the Vuntut Gwitchin First Nation in Canada, who is helping Arctic communities to become more sustainable. 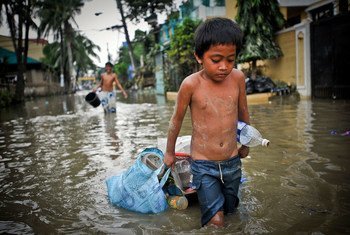 The convergence of the COVID-19 pandemic with natural hazards, made worse by climate change, has reshaped and expanded the disaster “riskscape” in Asia and the Pacific, according to a new report published on Wednesday by the UN’s regional commission there.