© ADB
A boy drags possessions through the flooded streets of Manila in the aftermath of a typhoon. (file)

The convergence of the COVID-19 pandemic with natural hazards, made worse by climate change, has reshaped and expanded the disaster “riskscape” in Asia and the Pacific, according to a new report published on Wednesday by the UN’s regional commission there.

In the Asia-Pacific Disaster Report 2021, the Economic and Social Commission for Asia and the Pacific (ESCAP) described how while dealing with the pandemic, countries in the region have also been hit by multiple biological and natural disasters, such as cyclones, landslides, heatwaves and volcanic eruptions.

At the same time, as climate change has continued to warm the world it is also exacerbating many of these disasters.

"The string of ‘record-breaking’ events show that we do not have the luxury of ‘waiting this out’: action must be taken now to address these risks" - Special Representative of the Secretary-General for Disaster Risk Reduction and @HeadUNDRR Mami Mizutori #DRWeek2021 pic.twitter.com/Lwpo34hqds

The capacity of disaster management and public health systems to respond to this “expanded risk environment” will determine the recovery path for COVID-19 and beyond, the report argues.

Countries must not ‘wait this out’

UN representatives serving throughout Asia and the Pacific met on Wednesday at the seventh session of the ESCAP Committee on Disaster Risk Reduction, where they were called on to intensify efforts to prepare for and tackle these complex, overlapping crises and increase the resilience of people as well as economies.

“The string of record-breaking weather events show that we do not have the luxury of ‘waiting this out’: Action must be taken now to address these risks”, said Mami Mizutori, UN Special Representative for Disaster Risk Reduction.

“This includes increasing international funding for disaster risk reduction and climate adaptation, especially for countries graduating from the least-developed category”, she added.

Despite progress made by many countries in devising more robust systems of early warning and responsive protection, which have led to far fewer people deaths resulting from natural disasters, ESCAP chief Armida Salsiah Alisjahbana said, “the COVID-19 pandemic has demonstrated that almost without exception, countries around the world are still ill-prepared to deal with multiple overlapping crises, which often cascade, with one triggering another”.

“Tropical cyclones, for example, can lead to floods, which lead to disease, which exacerbates poverty”, she elaborated.

Significant economic losses have also resulted from the “triple threat” of disease, disaster and climate change, according to ESCAP.

The annual average of disaster-related losses currently stands at $780 billion, which could nearly double, to around $1.4 trillion, in a worst-case climate scenario.

At an annual cost of $270 billion, choosing a proactive strategy of adapting to natural and other biological hazards would be far more cost-effective.

The meeting – the first of a four-event series to exchange ideas and solutions to key challenges facing Asia and the Pacific – also highlighted the importance of climate change mitigation and the need for regional countries to advance digital transformations to tackle the dual challenges of climate-related disasters and Covid-19.

Accentuating the urgency of building universal resilience against the vulnerabilities that the pandemic has exposed and tackling rising levels of inequality and poverty, Ms. Alisjahbana called for a “paradigm shift” from managing disasters to investing in prevention and the building of resilience.

COVID-19 pandemic, an ‘unprecedented wake-up call’ for all inhabitants of Mother Earth

FROM THE FIELD: Preparing for disaster in Nepal 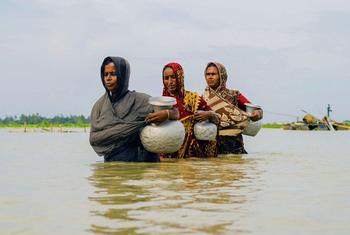 Race is on to limit extreme weather impact on most vulnerable: Guterres

As the global aid community marked World Humanitarian Day on Thursday, UN chief António Guterres paid tribute to all those who help people in need and urged support for the day’s #TheHumanRace campaign, which aims to protect the most vulnerable people from the climate emergency. 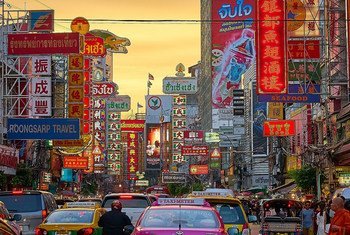 “Social responsibility and sustainable profit” can go hand in hand according to the chief of Thailand’s government pension fund. The UN, and some of the biggest players in the Thai economy, are working together to support efforts by the country’s finance and banking institutions to speed up the South East Asian country’s transition to a net zero carbon economy.