ILO/Marcel Crozet
Women in the Copperbelt Province of Zambia work in a greenhouse they built to increase the production capacity of vegetables they sell on the local market. (file 2015)

Imagine a world in which practically everyone works in jobs that are helping to transform the global economy, and bring about a world where business can thrive and the needs of the most vulnerable people are met.

For the UN, these “green jobs,” play an important role in realising the vision of the future that practically all countries signed up to when they adopted the landmark Paris Agreement in December 2015, an international commitment to combat climate change, and significantly reduce human activity contributing to global warming.

In the build-up to September’s UN Climate Summit, which will aim to inject momentum into the fight against climate change, UN Secretary-General António Guterres has called on world leaders to come with concrete proposals for decent green jobs, declaring “don’t come with a speech, come with a plan.”

UN News got in touch with Moustapha Kamal Gueye, coordinator of the Green Jobs Programme at the International Labour Organization (ILO) – the UN agency dedicated to promoting decent work – to find out more.

1. What exactly is a green job?

The ILO defines a green job as being one which contributes to preserving or restoring the environment. This can involve anything from improving energy efficiency, to actively de-carbonizing the economy and bringing down emissions of harmful gasses in the atmosphere.

The ILO says that green jobs contribute to the transformation of economies, workplaces, enterprises and labour markets into a sustainable economy that protects the planet and provides decent employment opportunities for all. Whilst some sectors lend themselves more easily to green jobs, Ultimately, “all jobs could be greened,” says Mr. Gueye, “in the sense that the way the work is done reduces the environmental footprint of the company.”

For the UN, green jobs must also be “decent jobs.” This means that they are productive, deliver a fair wage, social protection – which includes policies to reduce poverty and vulnerability, such as sickness, unemployment and disability benefits – and equality of opportunity for men and women. This refers back to the 2030 Agenda, the UN’s plan of action for people, planet and prosperity: one of the goals of the Agenda, Goal 8, calls for “full and productive employment and decent work,” an aim which supports many other of the goals that make up the UN’s vision for an economy that benefits all, and causes less harm to the environment.

2. What is a green economy?

Around the world many countries are trying to shift towards a cleaner economy, moving away from a reliance on energy produced by fossil fuels, such as coal and gas, towards a more sustainable supply by ramping up renewable energy sources, such as solar plants and wind farms.  This is an important example of the ways that countries can transition to a “green economy.”

Whilst there is not a universally agreed definition of the term, the United Nations Environment Programme (UNEP), describes a green economy as being one which is “low carbon, resource efficient and socially inclusive.” At the UN’s Rio+20 conference on sustainable development in 2012, one of the milestone conferences on the road to the adoption of the Paris Agreement, the outcome document declared that a green economy is “one of the important tools available for achieving sustainable development,” which should create “opportunities for employment and decent work for all, while maintaining the healthy functioning of the Earth’s ecosystems.”

3.  What kind of green jobs are being created today? 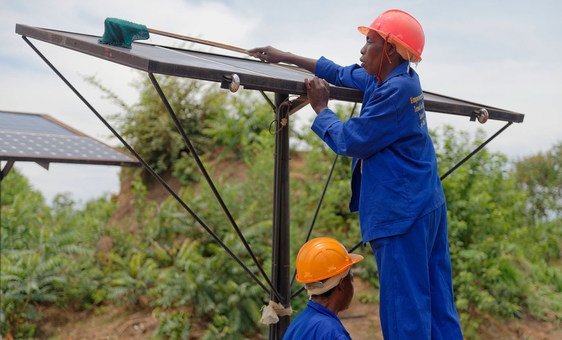 The shift to a green economy opens up a “massive opportunity for job creation,” says Mr. Gueye. An obvious example is the energy industry, where the shift to renewable energies is creating new jobs in companies catering to solar plants, wind farms and other clean energy sources.

But the opportunities stretch far beyond the energy industry, in both developed and developing countries, to include areas such as construction and manufacturing, where a host of innovative new techniques, often driven by digital technology, are designed to reduce waste and improve efficiency.

In developing countries, the ILO Green Jobs Programme actively helps communities to adopt and implement sustainable practices, increasing their chances of securing an income. In rural Zambia, for example, the Programme has trained women to build homes using sustainable techniques, and how to assemble and install solar panels, in a country suffering from an energy crisis, and where many people have never had access to electricity. The skills they have learned have had positive, life-changing benefits for the community and, by reducing waste and pollution, have reduced the impact on the environment.

4. How many green jobs will be created in a green economy?

The UN, including the ILO, is very bullish on the benefits to the job market of a green economy, and says that most scenarios suggest that the net effect will be positive. In its 2018 World Employment and Social Outlook report, the ILO says that, by 2030, 18 million new jobs will result from taking the steps necessary to keep the increase in global temperatures to below 2 degrees Celsius.

On top of this figure, a further six million jobs are expected to result from the growth of the so-called “circular economy,” in which, rather than products being used over a short period and thrown away, there is more emphasis on repairing, re-using and recycling.

UN News/Yasmina Guerda
Furniture made from repurposed wooden pallets provides a comfortable break for delegates at the COP24 climate change conference in Poland.

5. What will happen to people who aren’t working in green jobs?

The UN doesn’t shy away from the fact that the shift to a green economy will that some six million jobs –particularly in industries that are contributing to the emission of harmful gases, and other drivers of global warming – are expected to disappear.

This is why the ILO’s concept of a “Just Transition” is so important. Workers and communities across the world are already being impacted by the changing economy, and this is only expected to continue. A Just Transition accepts that some will face hardships as certain industries and occupations decline, but puts in place initiatives to address the challenges. These can include income support, retraining opportunities and relocation assistance.

For the Just Transition to function effectively, a range of actors need to work together, from trade unions, to national and local government, sustainability-conscious businesses and community-based organizations. And the prize couldn’t be bigger: a world in which all people work in decent, productive jobs, contributing to a global economy that protects the environment, for the benefit of all. 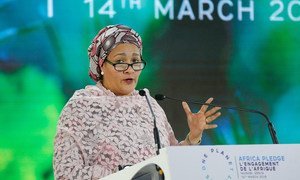 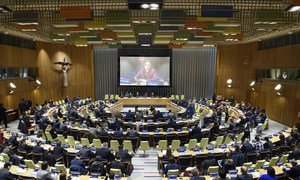 2019 is a critical year, the “last chance” for the international community to take effective action on climate change, General Assembly President Maria Espinosa said on Thursday, during a briefing to announce the UN’s roadmap to the Climate Summit in September.