Climate change and loss of biodiversity is seen as the most pressing challenge over the decade, according to the World in 2030 Survey report published on Wednesday by the UN Educational, Scientific and Cultural Organization (UNESCO).

More than 15,000 people worldwide contributed to the survey, which was held online between May and September 2020, and made available in 25 languages.

Last year we asked 15,000 people across the globe on what they think are the main global challenges in the World in 2030. We have the full survey results now!Read the survey report here &amp; see what people think of the #WorldIn2030! ➡️ https://t.co/8S6iCRDNRh #Agenda2030 pic.twitter.com/7mEZkFRSzk

Respondents were mainly young people, with 57 per cent under age 35, and 35 per cent under 25. Results also were analyzed along regional, gender, age and other demographic lines.

“Greater efforts are needed to address people’s specific concerns, and multilateralism is the way to do this. Restoring confidence in multilateralism requires the implementation of concrete and impactful projects, and this is at the heart of our Organization's role”, said Audrey Azoulay, the UNESCO Director-General.

The World in 2030 survey invited people from across the globe to share their specific worries about 11 challenges, and solutions for overcoming them.

Education is the solution

Most participants, or 67 per cent, selected climate change and loss of biodiversity as their top concern, mainly due to issues such as increasing natural disasters and extreme weather.

Respondents felt investment in ‘green’ solutions, education on sustainability, promoting international cooperation and building trust in science, were the best ways to address the issue.

Violence and conflict, discrimination and equality, and lack of food, water and housing were other big challenges, the survey revealed.

Participants believed that overall, more education was the crucial solution to every single challenge.  They also felt that it was the area that most needed to be re-thought, in light of the COVID-19 pandemic, followed by the overall relationship between humankind and nature.

The survey further showed that while 95 per cent of respondents extoll the importance of global cooperation in overcoming common challenges, only one in four felt confident that the world would be able to address these issues.

UNESCO said that “taken together, the results suggest not a lack of appreciation of the importance of multilateralism but rather a crisis of faith in its effectiveness.” 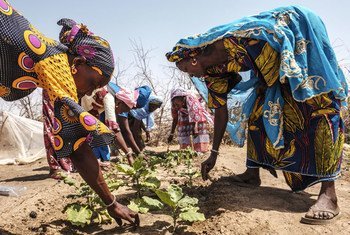 The world needs “a major breakthrough” to slow the pace of climate change and build resilience to protect the most vulnerable from increasingly severe and frequent climate impacts, the deputy UN chief told a crucial high-level meeting on Wednesday, looking ahead to November’s COP26.