@ superkant for @ StreetArtMankind
The Alchemist is a 40-metre-high mural which has been painted onto the side of a property in Brussels.

A Spanish artist is using a giant 40-metre-high artwork painted on the side of a building in the Belgian capital, Brussels, to pose questions about climate change and the effect it’s having on global ecosystems.

‘The Alchemist’ by Lula Goce, has been created in collaboration with the United Nations and non-profit organisation Street Art for Mankind (SAM) and is the first in a series of 50 murals which will be painted over the next 10 years in cities across the world to encourage the ecological restoration of damaged or dying ecosystems.

“This mural, this lady, is a metaphor of Mother Nature taking care of the environment and trying to preserve a space for all the animals in the herd” explains Lula Goce. “She is trying to protect it and is watching us as we have the responsibility to protect it”.

With the planet’s ecosystems facing threats from climate change, biodiversity loss and pollution, there has never been a more urgent need to ensure those ecosystems are revived and can thrive.

“Scientists tell us we only have ten more years to switch from exploiting ecosystems to reviving them instead. This can be achieved, but action is needed from across society”, says Veronika Hunt Safrankova, Head of the Brussels office of the UN Environment programme (UNEP) adding that “artists can play a central role in spreading the message.”

Bringing the natural world to town

@ superkant for @ StreetArtMankind
Mural artist, Lula Goce, says the mural is intended to send a 'positive message' about the need to preserve biodiversity.

Born in Galicia, Spain, Lula Goce grew up surrounded by “salty coastal air, barnacles, drizzle and beautiful beaches”, and she brings these natural influences into the urban spaces where she works.

“Living in cities, surrounded by cars and buildings, we are losing this connection with the natural world,’’ says Lula Goce, who has created artworks across the world, including in Azerbaijan, Mexico and the United States. “We are part of nature, and it is up to us to be responsible with the planet”.

Painting immense artworks in public spaces ignites a direct interaction between spectator and mural from the moment the painting process begins, according to the artist.

“Art in the studio is for people who like art and who search for art. Here, it is for people going to work, putting out the rubbish; they are not expecting it”.

Members of the public are also often surprised to see she is a woman. “I am breaking their stereotypes, the bricks they have in their mind,” she adds.

@ superkant for @ StreetArtMankind
Lula Goce, says she has had to overcome her fear of heights to paint the 40-metre-high mural.

Artists painting such murals need to be both physically and mentally strong, particularly as they often work in changeable weather conditions. For Lula Goce, she must also combat a fear of heights, but says her will to complete her projects, is greater than her fear.

When crafting such murals, she says she feels a huge weight of responsibility, as the artwork will constantly be present in the lives of those living around them.

“I want them to have a good relationship with the art and I try to send a positive message. (In this mural), I am presenting a herd we need to preserve. Change is possible, if we work together.’’

The artwork, is part of the UN Decade on Ecosystem Restoration, a global effort led by the UN Environment Programme (UNEP) and the Food and Agriculture Organization of the UN (FAO) to halt climate change and restore ecosystems by 2030.
It has been created with the support of the UN Regional Information Centre in Brussels (UNRIC), the City of Brussels, and Parcours Street Art, and made possible by the UN Global Compact member, Solvay.
♦ Receive daily updates directly in your inbox - Subscribe here to a topic.
♦ Download the UN News app for your iOS or Android devices. 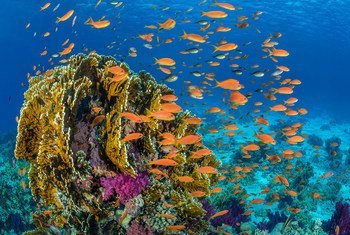 As the living tissue of the earth, biodiversity is “intimately linked to human health” the head of the UN’s scientific agency told a global forum on Wednesday, noting that “we are part of that living tissue”. 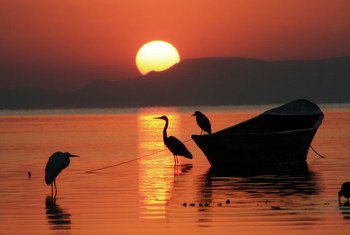 People everywhere need to remember that we depend on Mother Earth to survive, the UN chief said in his message for World Wildlife Day marked on Tuesday, advocating for “a more caring, thoughtful and sustainable relationship with nature”.