FAO/Giulio Napolitano
Good hygiene on farms can help stem the rise of antimicrobial resistance that comes from the over-reliance of antibiotics.

More cases of COVID-19 have been reported in the past four weeks than in the first six months of the pandemic, the UN health agency chief told journalists on Friday as he launched a new report on the threat posed by antimicrobial resistance.

“Across Europe and North America, hospitals and ICU units are filling up or are full”, Tedros Adhanom Ghebreyesus, Director-General of the World Health Organization (WHO) said at a regular press briefing in Geneva.

While sharing “more good news from vaccine trials, which continues to give us hope of ending the pandemic”, he upheld the need to continue to “use the tools we have to interrupt the chains of transmission and save lives”.

The COVID-19 pandemic is a stark reminder of the “intimate relationship between humans, animals and the planet we share”, the WHO chief said.

“We cannot protect and promote human health without paying attention to the health of animals and the health of our environment”.

This is particularly relevant when considering antimicrobial resistance, according to Tedros, who called it “one of the greatest health threats of our time”.

Antimicrobial resistance threatens the efficacy of the antibiotics that are key in combatting HIV, malaria, neglected tropical diseases and many other illnesses.

And while antimicrobial resistance may not seem as urgent as a pandemic, it is not only just as dangerous but threatens to “unwind a century of medical progress and leave us defenseless against infections that today can be treated easily”, he warned.

Aligning with World Antimicrobial Awareness Week, which kicked off on Wednesday, the WHO chief launched a new report – along with the Food and Agriculture Organization (FAO) and the World Organization for Animal Health  – that examines international rules governing antimicrobial practices, and identifies gaps in regulations governing their use on humans, animals and plants.

The report, based on data from 136 countries, reveals that while almost 90 per cent of States have national action plans for antimicrobial resistance, only 20 per cent have identified funding for their implementation.

“To help address that gap, together we have established a trust fund to support low and middle income countries to develop a truly ‘One Health’ approach to addressing antimicrobial resistance”, Tedros asserted, thanking Netherlands, Sweden and the United Kingdom for $13 million in funding - the first round of support for eleven countries, and to generate more global coherence in their use.

Against the backdrop that increased political commitment at the highest levels of government was “one of the most important ways” to achieve that goal, the WHO chief announced the One Health Global Leaders Group, which will bring together prominent leaders from government, the private sector and civil society organizations “to advocate for urgent action to combat the threat of antimicrobial resistance”.

It also involves participants from agriculture, health, development and other relevant areas “to maintain urgency, public support, political momentum and visibility of the antimicrobial resistance challenge”.

FAO/Giulio Napolitano
Good hygiene on farms can help stem the rise of antimicrobial resistance that comes from the over-reliance of antibiotics.
♦ Receive daily updates directly in your inbox - Subscribe here to a topic.
♦ Download the UN News app for your iOS or Android devices. 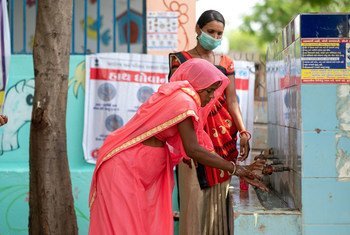 The World Health Organization (WHO) reported the largest single-day increase in coronavirus cases over the course of Sunday, registering more than 183,000 new infections in 24 hours, bringing the total to some 8.8 million cases worldwide, with more than 465,000 deaths. 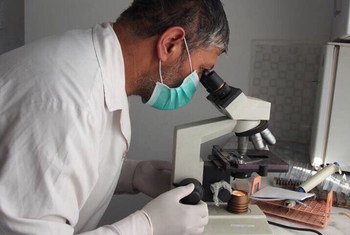 People, plants and animals around the world are dying from untreatable infections – even with the best medicines available – due to a rise in antimicrobial resistance, the UN food agriculture agency said on Wednesday, kicking off World Antimicrobial Awareness Week.