The UN Special Coordinator for the Middle East Peace Process reminded the Security Council on Monday of the Secretary-General’s renewed appeal for a global ceasefire to respond to COVID-19, highlighting that the “the virus feeds off instability”.

In his virtual briefing, Nickolay Mladenov told the 15-member body that “a coherent, coordinated approach” was needed to contain the pandemic, saying that the UN would continue to advocate for increasing cooperation, including urging the parties to “work together to mitigate risks, save lives and avoid unilateral actions that undermine these efforts”.

Work together to mitigate risks, save lives and avoid unilateral actions that undermine these efforts -- UN envoy

With a significant tightening of restrictions in Israel and Gaza, a state of emergency extension throughout the Occupied Palestinian Territory (oPt), the resurgence of COVID-19 has “seriously compounded the humanitarian and economic challenges on the ground”, Mr. Mladenov informed the Council.

And while UN-brokered arrangements continue to allow medical patients to be transferred from Gaza to hospitals beyond, and humanitarian supplies into the enclave, the Palestine Authority’s (PA) decision to halt coordination with Israel remains.

“The UN cannot replace the roles and responsibilities of the Palestinian Authority or the Government of Israel”, he upheld. “Any increased responsibilities for the UN in this regard should be limited and timebound”.

While the international community’s commitment “remains unwavering” in its support to both sides in finding a solution to the Israeli-Palestinian conflict, the UN envoy asserted that the process requires “leadership from both Israelis and Palestinians to work together and advance the cause of peace”.

The UN envoy noted that the viability of the PA is being “severely undermined” by an economic and fiscal crisis that has been exacerbated by it decision to end civilian and security coordination with Israel.

“The fiscal crisis derives primarily from a collapse in domestic tax revenues during the COVID-19 emergency and from the Government’s refusal to receive its clearance revenues”, he elaborated.

The UN “stands ready to mediate solutions to the fiscal crisis and to get the Palestinian economy on better footing”, said Mr. Mladenov, reiterating the UN chief’s call for both sides to “re-examine the nature of their economic relationship and improve it for the benefit of both peoples”.

“No one wants war and conflict”, the UN envoy said, adding that the pandemic has “heightened the urgency” to explore “all avenues” toward ending the conflict and the occupation, to achieve the “vision of two States”.

If leaders do not deliver on the hope for peace, they “will only feed radicals and extremists”, he warned.

The Council has often spoken of “the urgent need to act, to prevent the collapse of the two-State paradigm and to give hope to the Palestinian people – particularly the youth…[that] young Israelis want too”, reminded the UN official.

To this end, the UN envoy informed that Palestinian President Abbas has called for an international conference to “restart the peace process” for “an independent, democratic, contiguous, viable and sovereign Palestinian State” within secure and recognized borders, based on the 1967 lines, with Jerusalem as the shared capital.

Pointing to recent normalization agreements between Israel and Bahrain, the United Arab Emirates (UAE) and Sudan, along with statements from international partners and the League of Arab States, the Special Coordinator observed that “the commitment to the two-State solution, in line with UN resolutions and international law, continues to be affirmed by broad regional and international consensus”.

Against this backdrop, he shared his hope that “new avenues of cooperation to advance Israeli-Palestinian peace will emerge”.

© UNICEF/Ahed Izhiman
Before COVID-19 locked down schools, children in Hebron’s old city had to pass through a military checkpoint to attend classes.
♦ Receive daily updates directly in your inbox - Subscribe here to a topic.
♦ Download the UN News app for your iOS or Android devices. 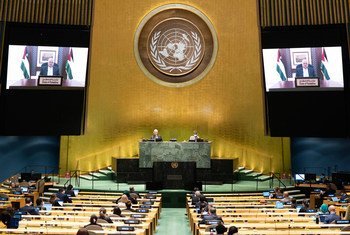 The President of the State of Palestine addressed, via a pre-recorded video, the United Nations General Assembly on Friday, highlighting the suffering of his people and the misery they experience every day “while the world stands by watching.” 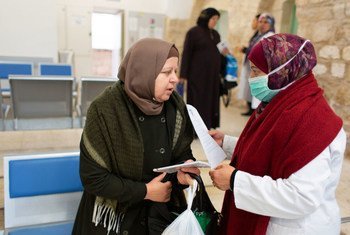