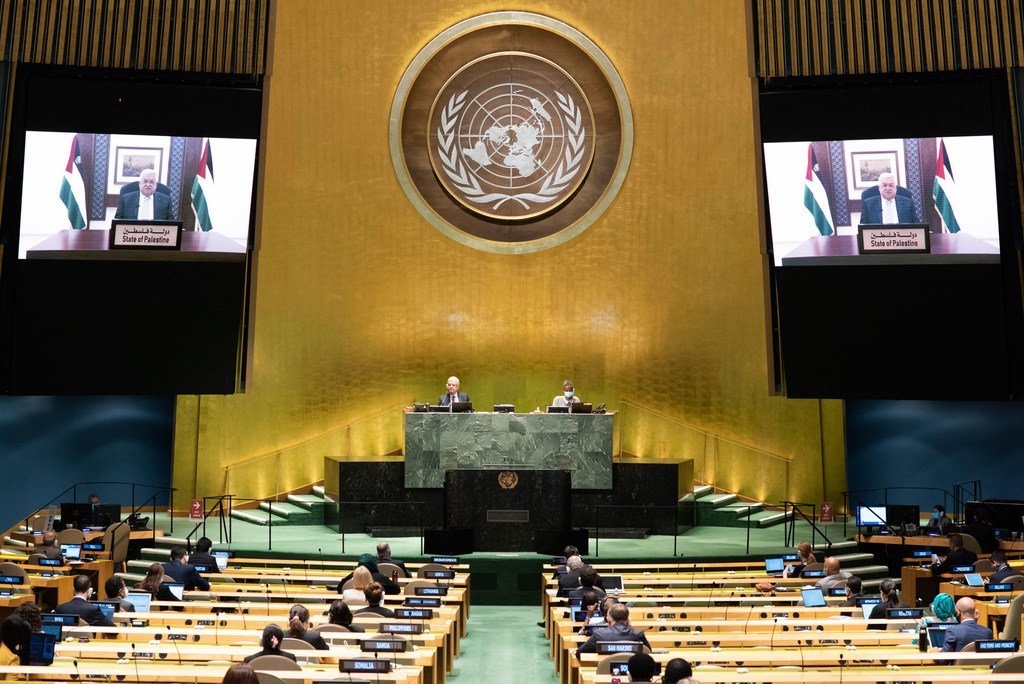 The President of the State of Palestine addressed, via a pre-recorded video, the United Nations General Assembly on Friday, highlighting the suffering of his people and the misery they experience every day “while the world stands by watching.”

“How long do we have to wait until there is a just solution to the Palestine question, a solution guaranteed by international law,” he asked world leaders gathered virtually for the UN Assembly’s annual high-level debate.

“How long will the Palestinian people continue to languish under the yoke of Israeli occupation, how long do we have to wait until there is a just solution to the status of millions of Palestinian refugees.”

President Abbas said that the Palestinian people have lived in the land of their forefathers for 6,000 years, adding that they will remain in this land and they will stand up to occupation, aggression and betrayal, until they gain their rights.

“In spite of the difficulties and the unjust blockade … we will not bow down, we will not surrender, we will not compromise,” he stressed, adding: “And, we shall triumph.”

‘We did all of this for peace’

In spite of “historic injustice” committed against it, the State of Palestine has accepted the rule of international law and UN resolutions, even though these resolutions only acknowledged as Palestinian the territories occupied in 1967, said President Abbas.

Israel, however, with the support of the present US administration, “wants to substitute this basis for a just solution with the US ‘Deal of the Century’,” he continued, stressing, “We have rejected this deal, as did the international community,” as it contravenes international law and UN resolutions.

President Abbas reiterated that the State of Palestine has always sought a just, comprehensive and lasting peace, and has agreed to all the initiatives presented to it.

“I have personally dedicated my life to achieving this desired peace, notably since 1988, followed by the Madrid Conference and the Oslo Accords in 1993, and to this very day. We accepted and remained committed to the Arab Peace Initiative, as it provides for peace, security and coexistence once the occupation ends. We did all of this for peace.”

However, in return, Israel violated all agreements signed with the State Palestine, undermined the two-State solution, and systematically acted to alter the character and identity of occupied Jerusalem, attacking its Muslim and Christian holy sites, Mr. Abbas continued.

“[Israel is] pursuing its settler colonialism on our land and against our people, ignoring the Arab Peace Initiative for peace and actively attempting now to kill another opportunity for peace through reckless unilateral measures,” he said.

No one negotiates on our behalf

In his address, President Abbas said that the recent agreements between Israel and both the United Arab Emirates and Bahrain were in violation of the Arab Peace Initiative, and the terms of reference of a comprehensive, lasting and just solution in accordance with international law.

“The Palestine Liberation Organization has not given a mandate to anyone to speak or negotiate on behalf of the Palestinian people and the only path to lasting, comprehensive and just peace in our region requires ending the occupation and securing the independence of the State of Palestine on the 1967 borders with East Jerusalem as its capital,” he stressed.

A living nation, aspiring for freedom

Further in his address, President Abbas said that in Palestine “there is a living nation, creative, civilized, peace-loving, aspiring passionately to freedom.” Despite the challenges, it has been able to build an active and modern society, that believes in democracy and the rule of law.

He informed the General Assembly that preparations are ongoing to hold parliamentary elections, followed by presidential elections, with the participation of all factions and political parties.

“We will continue creating life and hope under the flag of national unity and democracy,” he continued, adding “We will remain faithful to peace, justice, human and national dignity under all circumstances.”

♦ Receive daily updates directly in your inbox - Subscribe here to a topic.
♦ Download the UN News app for your iOS or Android devices.
Palestine|UNGA75|General Assembly